The moment said everything. It was perfect, capsulizing emotions felt throughout Western New York, even if U.S. Army Maj. Patrick Miller earned a larger perspective through a trial none of us would want to face.

He is a Buffalo Bills fan, going back to his earliest memories. He is stationed in Hawaii, and he watched on television Sunday with his wife, Ashley, as the Bills defeated the Miami Dolphins.

Yet Miller, like the rest of us, had no illusions about the resilient power of "the drought," those 17 years in which the Bills missed the playoffs. He can recall every aching close call, such as Buffalo's final game loss against what essentially were the Pittsburgh Steelers backups, a defeat that closed the door on the 2004-05 postseason.

Sunday, he knew Cincinnati had to defeat Baltimore for the Bills to make it in. After Buffalo beat Miami, he kept an eye on the score as the Ravens rallied to go ahead. He braced himself for more annual disappointment.

Instead, the Bengals rallied and won. Miller, 36, stunned, wearing a Bills cap and Tyrod Taylor jersey, "went out and ran around the kitchen, screaming and yelling," until he dropped to his knees in utter euphoria, then collapsed in a chair and started weeping. When his toddler daughter Harper wandered over, he gathered her up.

Ashley, a Cazenovia native, captured a video of the moment. You hear her say, laughing:

"You did not cry this hard when we had our daughter."

"I'm certainly not trying to blow this out of proportion," Miller said. "It's a big world out there, with a lot of real world situations that really matter, and this is football. But I've dreamed about this moment, wondered if and when it was going to happen."

He has a fierce understanding of the meaning of perspective. In 2014, Miller was shot in the stomach at Fort Hood when another soldier, Specialist Ivan Lopez, opened fire on his fellow troops, killing three people and wounding 14 before Lopez took his own life.

Miller was hit when he ran toward the sound of gunshots. Even while wounded, he managed to lock an office door between himself and Lopez, protecting others from the gunman. He later told Barbara O'Brien of The Buffalo News that the bullet missed his heart by 2 inches. During the wait for help, he had time enough to wonder whether he would survive.

That stark vision of the world was piled atop two deployments to Iraq, where Miller remembers how the Bills and Sabres "served as an anchor, something to tie you back to home." 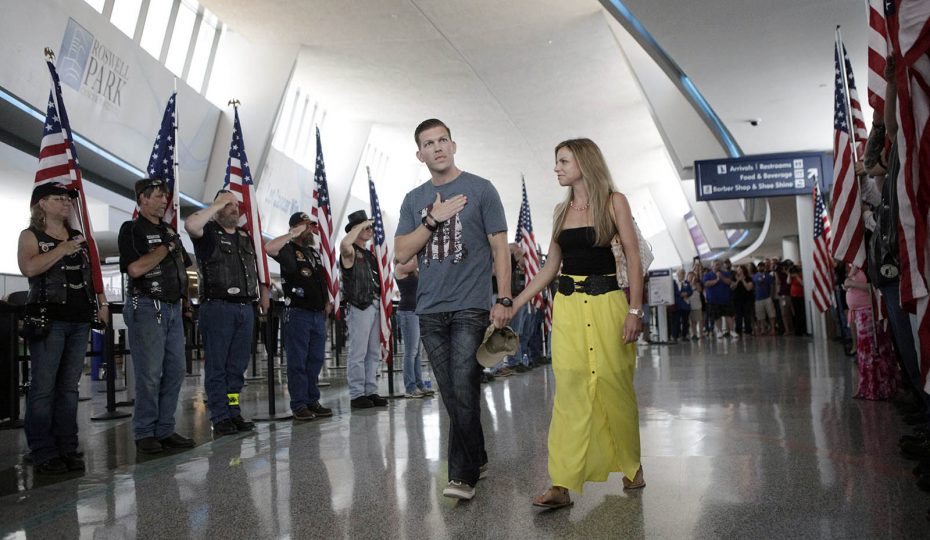 He is a St. Bonaventure graduate, and he later did his graduate work at Syracuse.

In Iraq, he kept track of the progress of many upstate teams, professional or collegiate.

"It gets you through the tough days," he said.

The drought, he said, was exquisitely painful. He was raised in Allegany, in the Olean area. His parents – especially his mother, Carole, a Buffalo native – "were huge Bills fans."

They were season ticket holders starting in 1991, a run that wrapped in three of the Super Bowl years. Miller remembers beautiful autumn days and the charcoal smell in the parking lot of what is now New Era Stadium in Orchard Park. He remembers extended family and close friends gathering in their living room to watch games on the road.

He has a vivid memory of going to the 1993 playoff game against Houston with his parents, where the Bills fell behind 35-3.

While thousands left, they stayed in the stands to see the great comeback and victory, still the emblematic Bills miracle.

There was a communion, an optimistic beauty to those days, that Miller finds hard to put to words. After a heartbreaking loss to Tennessee in the 2000 playoffs, he assumed – like everyone else – that the Bills would soon return to the postseason.

After a while, the uncertainty grows. You start to wonder.

Sunday, finally, the doubts came to an end.

His close call at Fort Hood has left him with a platform, a public presence and opportunity, that he never expected. He received the Soldier's Medal, the highest honor awarded by the military for valor in a noncombat situation. Miller has responded with tireless work for such organizations as the Homes for Our Troops and Fisher House foundations, ways of assisting military families that he emphasized while being honored at Bills and Sabres games.

If anyone cried Sunday with even more intensity than he did, he said it was his mother, the person who taught him – by example – deep passion for the Bills. She learned to cope with epilepsy as a child, then discovered she had multiple myeloma, a form of cancer, more than a year ago.

Go to Miller's Twitter feed, and you'll find a video of Carole Miller ringing a bell to end her treatment at the Roswell Park Cancer Institute, after 10 months of chemotherapy and a bone marrow transplant.

All of that history was in the room with Miller's family Sunday when Andy Dalton connected on a 49-yard touchdown pass to Tyler Boyd, the Bengals won – and the Bills were in the playoffs.

Miller screamed with joy, ran around and settled in to weep near the television. His wife caught it on video, and initially they sent it only to people in their closest circle.

Then Miller thought about it, and tweeted the moment to the world.

"It was raw and it was authentic," he said, qualities he knew would do just fine in Buffalo.