The real story with this piece is the reader response. If you get a chance, check the flood of passionate, from-the-heart replies from Bills loyalists in the comments immediately following the column, people who've invested a part of their lives in this team – and feel free to add your own perspective. If you have any celebratory reaction videos from when you first found out the Bills made the playoffs or what the end of the Bills playoff drought means to you, please share them with Qina Liu at qliu@buffnews.com. We may feature some of your video footage on BuffaloNews.com and/or Buffalo News affiliated social media sites.

I'd like to hear about the text message you received Sunday, at the instant of realization, from a child who grew up without seeing it happen and then moved far away. Or what this threshold means to an elderly parent who'd given up on it.  Or why this matters so much to someone who's seen the Buffalo Bills as a beautiful distraction during hard or painful times in life.

Because I'll guess, if you're like me, the real power of the Bills returning to the National Football League playoffs begins with an image difficult to shake from your head.

You're a Western New Yorker, from Buffalo or Lockport or East Aurora or Jamestown or any of the places that join together as one extended community when it comes to the Bills, and you remember exactly where the kids were sitting in the living room. They were little, maybe 5 or 6 or 7 years old, and they were happy, bubbling with laughter, the way small kids often react when the grownups around them are clearly joyous.

And you were joyous, because this was about to be one big win. This was Jan. 8, 2000, and you were locked into position near your television, watching a playoff game from Nashville that would serve as a chronological statement as one century glided into another.

The Bills had fought their way to a 16-15 victory over the Tennessee Titans. You were sure of it.

This Buffalo team, like so many Bills teams, could sometimes seem maddening, and sure, the town was still torn about whether coach Wade Phillips should have benched quarterback Doug Flutie for Rob Johnson, but here was the indisputable truth of the moment:

Buffalo looked like the kind of team that can sometimes ascend late in the season to reach the Super Bowl, an aggressive defense peaking at the right time, an offense good enough to do the job.

If nothing else, on that day, the Bills had won. That seemed ironclad. Steve Christie kicked a field goal to put Buffalo ahead as the clock ran down to the final handful of seconds. The Bills would win as they had won so many times in the 1990s, that glorious decade when they so often came through when it mattered.

All it would take was a kickoff and then a tackle – except the tackle never happened.

Instead, you witnessed the impossible, the toss across the field – throwback or miracle – that turned a sure win into an abyss of a loss, followed by utter silence in the living room. There was no Twitter or Facebook, no easy form of communal lamenting. For many people, it would still be a long while before the purchase of a basic cellphone.

So you put your hands on your head and walked into the kitchen or onto the porch in disbelief, mourning with a spouse or a sibling, cycling through that crazy, empty feeling in your gut, because the game was won – you were so sure it was won – and you were already set to cherish what always accompanies a postseason run.

You were ready for continuing the second season that defined the playoffs in Western New York, the Bills flags flying in front of duplexes in Buffalo and bungalows in Lackawanna, the playoff conversations while standing in line at Wegmans or Tim Hortons, the toll booth operators wearing Bills gloves and Bills caps.

You were ready for the way the playoffs always generated an extended holiday unto themselves, a warm bubble at one of the coldest and hardest times of the year.

[From Jerry Sullivan: Surreal, but the Bills are in the playoffs]

While that day ended in groans and muttering, the frustration was tempered by utter confidence, based on the history of the time. The playoffs would return, if not next year then in a couple of years, and your kids would soon get a taste of what the entire region saw as a part of life.

Except it never came.

Not the next year, or the year after that.

There were 17 "didn't happens" in all before Sunday evening, before that reversal of the sequence most Bills fans had learned so well during that time, which essentially came down to this:

Everything that can go wrong, at some point, inevitably will. 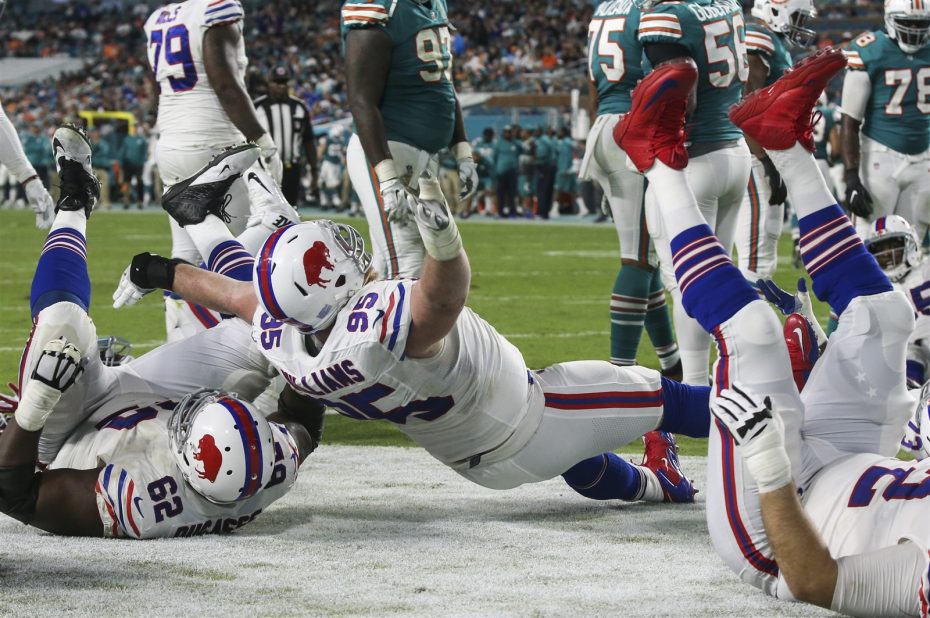 So you watched the Bills put away the Miami Dolphins in an efficient way, but you also watched the score at the bottom of the screen. Cincinnati had to beat Baltimore for the Bills to make it in, and an early Bengals lead began to disintegrate.

You watched in living rooms and nursing homes and fire stations and hospitals and taverns and community centers. You watched in tiny apartments in the city and in mansions by the lake, just about everyone half-expecting that exactly what did happen, would happen.

The Ravens came back to go ahead — of course they did! — and the Bills victory would be just another especially aching tease, the sendoff for another off-season of endless ruminating about who ought to stay and who ought to go, another sigh for our children, another moment on the list of "almost" tales ….

Until Andy Dalton found Tyler Boyd on a 49-yard touchdown completion, and the Bengals won.

Impossible. Bills fans were shouting, clenched hands rising above their coffee tables. Then the texts and Facebook messages were flying around, messages to or from those same kids who sat in the living room so many years ago, kids now in their 20s or 30s and spread around the nation.

They are in thousands of different professions, young adults whose entire childhoods came and went waiting for the year that had to happen, even if it never did:

Their team, someday, would again be in the playoffs.

Those are the stories I'd love to hear, stories of why this matters so much to your children, to your parents, to your extended family, to someone you love, someone you lost – or to you. Share those tales as comments below, email them to me at skirst@buffnews.com, or send them by letter to me in care of The Buffalo News, One News Plaza, Buffalo 14240, and I'll put some of them together as a compilation later in the week.

Those of us who remember know what to expect: On thousands of porches, Bills flags will toss this week in the fierce wind off Lake Erie. Going to work or school will seem a little more like a festival and a little less like obligation. The cold and ice will abruptly become more bearable.

Best of all, new generations will get a chance to share in it. They are recipients, finally, of a sweet and difficult lesson about football that's also true of other things, a lesson we learned long ago in Buffalo.

Sean Kirst is a columnist with The Buffalo News. Read more of his work in this archive.