NIAGARA-ON-THE-LAKE, Ont. – Hidden among the vineyards that dot the landscape here is a far different twist on the region's agricultural legacy – a collection of mammoth greenhouses containing what may be its most popular and profitable crop ever.

This small town at the mouth of the Niagara River, a community known for its theater and quaint, historic downtown, is adding a new face to its public image: It's becoming home to what organizers describe as the world's largest, legal indoor marijuana farm.

Tweed Farms is in the midst of an expansion that will result in more than 1 million square feet of pot plants. The expansion is in no small part a reaction to Ontario's decision to legalize the recreational use of marijuana.

"It's been a wild ride," company spokesman Jordan Sinclair said during a recent tour of Tweed Farms. "Just a few years ago, we were a small start-up and now we're in four countries."

In simpler terms, each three-month harvest at the greenhouses here produces about 8,400 pounds of weed, not to mention the oils and edible soft capsules that are popular with people seeking the medicinal benefits of marijuana.

The farm, now about 3 years old, started with the purchase of a few existing vegetable greenhouses in rural St. Davids, and it currently produces medical marijuana for use primarily in Canada.

By next year, when the newly built greenhouses – and there are many – begin to produce, Tweed Farms will have tripled its growing space. 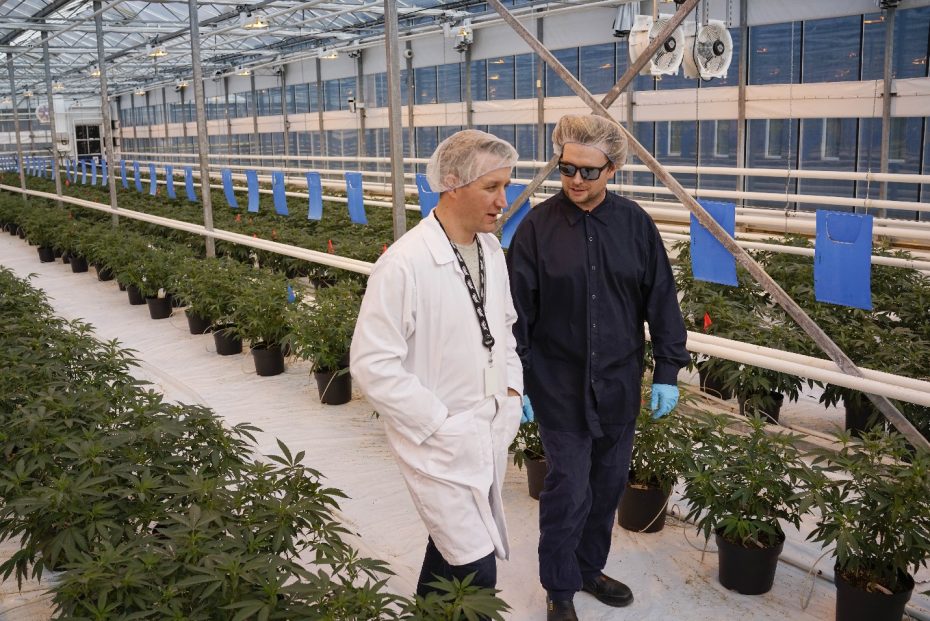 With the expansion will come a spotlight of sorts.

"We're trying to challenge people's perception of the industry," Sinclair said. "And the whole world is watching, so we have to do it well."

On any given day, you can visit the farm, now home to heavy equipment, construction trailers and workers in hard hats, and see firsthand the scale of the expansion and investment by Canopy Growth.

While the greenhouses, old and new, still dominate the site, the expansion brought other changes to the operation, most notably an upgraded laboratory, new drying rooms and updated irrigation and environmental control systems.

Inside, far away from the public's view, is a 3,000 square foot vault. It's the size of a large house and the secure home for the marijuana awaiting shipment to a Canopy Growth operation in Smith Falls, Ont.

Recreational marijuana will be legal in Ontario come July 18.

You'll have to be at least 19 years old to buy and smoke marijuana in the province and you can only smoke it in a private residence. Smoking pot in your car is prohibited.

The province also laid out rules about driving and marijuana use. Because marijuana does not show up on tests in the way alcohol does, law enforcement will be able to make driving while impaired arrests based on field sobriety tests.

The Ontario Liquor Control Board will oversee sales of marijuana in stand-alone cannabis stores as well as online. Ontario wants to open 40 of these stores in July and a total of 150 by 2020. Alcohol will not be sold at these stores.

While it will be legal to buy and smoke pot in Canada, it remains illegal in New York State, said Aaron Bowker, a spokesman for U.S. Customs and Border Patrol. Border agents aren't anticipating any changes to how they handle cases where someone tries to bring marijuana across the border into the U.S. The agency is planning to do a public education campaign in June to remind the public about U.S. laws regarding marijuana.

Since Tweed Farms opened three years ago, much of the community has embraced the new farmers , and it's not uncommon to hear St. Davids residents talk about the jobs it created – 60 now and an estimated 150 by next summer when legalization takes effect.

When asked if the people she knows support the farm, Crystal Simons, who lives in St. Davids  and works at a nearby business, said it's no longer a big topic of conversation.

Simons said folks who support the farm usually point to the medicinal benefits of pot while detractors tend to cite concerns about crime or drug use. 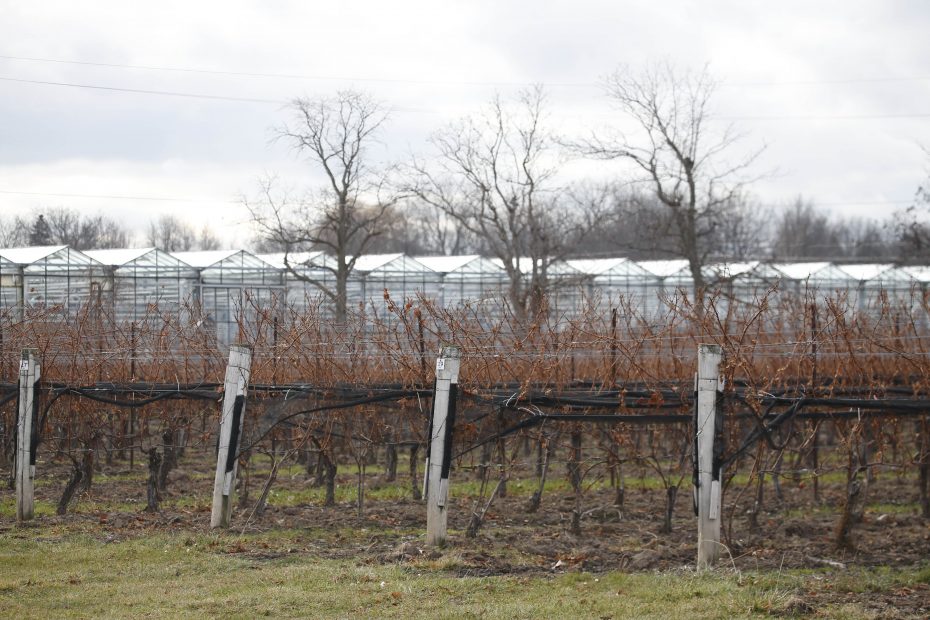 The sprawling marijuana greenhouses at Tweed Farms rise above the rows of grapes at the neighboring vineyard in Niagara-on-the-Lake, Ont. (Derek Gee/Buffalo News)

Just a stone's throw away from the pot farm in St. Davids – a small community in Niagara-on-the-Lake – are the wineries that have called this region home for decades, and for some them, Tweed Farms represents a very real fear.

One wine maker, who spoke on the condition he not be identified, said the smell of marijuana from the facility is often overwhelming and he worries about the impact on his grapes.

He said the region's winery owners have expressed their opposition to the farm in letters to the company and the region's elected officials and have found no support for their concerns.

"We're very, very uncomfortable with them being here," the wine maker said. "This is a grape-growing region, and they could go anywhere."

In St. Davids, one resident said people are more concerned about the influx of new, upscale housing and its impact on the rural community, than they are about Tweed Farms.

Others, like Amber Parkin, think the medical benefits of marijuana have helped turn the tide of public opinion in her community. She also thinks the addition of new jobs helps.

"It's pretty quiet," Parkin, who works at nearby store, said of the operation. "People know it's there and I think most of them see it as place that's producing employment."

When asked about St. Davids' response to their expansion, Canopy Growth acknowledges some discontent, especially among the wineries, but is quick to dispel rumors that it wants to buy up some of the vineyards and convert them to pot growing.

"There has been some resistance," Sinclair said of the winery owners. "But we're not here to scoop up farm land."

At the core of the growing effort at Tweed Farms is Ryan Harris, the company's head grower and a man who might hold some keys to understanding the mainstream appeal of pot and why, all of sudden, governments such as Ontario are moving to legalize and exploit it.

Harris has been planting and harvesting pot for 10 years, the last four in St. Davids. He is an unabashed supporter of the plant and the benefits it brings to users.

"It's been a passion of mine," he said without pause. "It's also helped me in my life journey."

To hear Harris talk, the demand for pot is not going away and he's not shy about suggesting now is the time to increase supply and even the playing field.

It's also obvious he enjoys his work. On the day he toured the facility with a reporter and photographer, he proudly pointed out that some of the plants were flowering for the first time. 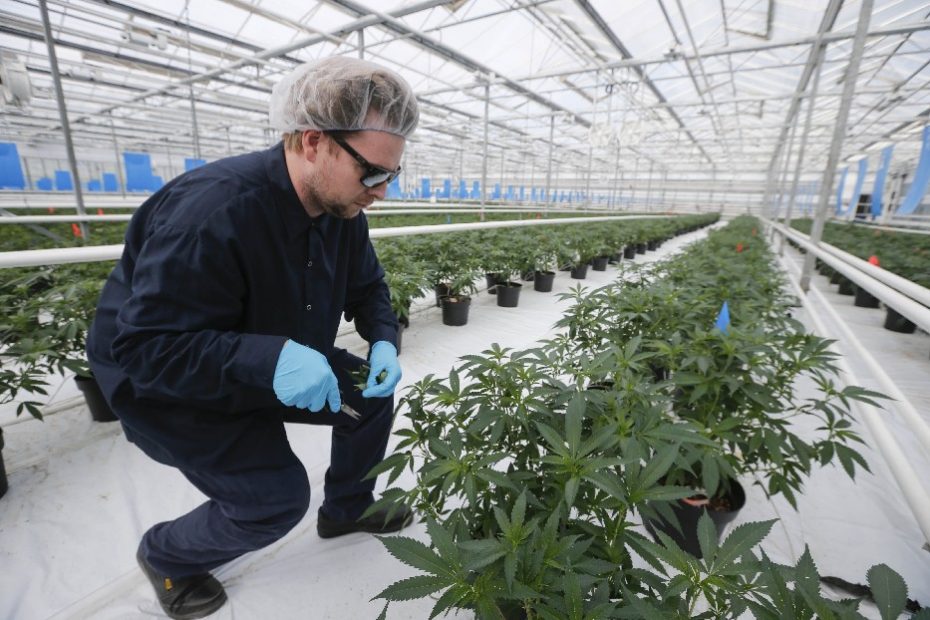 He also noted, at one point, when asked about his gardening background, that not one of his plants ever has a brown spot.

Contained in black plastic pots, the plants are constantly watered, trimmed and exposed to the type of lighting, natural and man-made, that allows for optimal growing.

With the expansion will come the ability to increase the number of roughly three-month growing cycles from a handful each year to several dozen a year and allow the company, for the first time, to offer an uninterrupted supply of pot to its customers.

With legalization only seven months away, the interest in Tweed Farms is expanding beyond Main Street.

In October, Constellation Brands, a wine and liquor conglomerate whose brands include Corona and Svedka Vodka, invested $191 million in Canopy Growth, a sign of confidence in the recreational pot market.

Not surprisingly, the prospects for expansion also propelled the company's stock price from a low of $2 a share at its debut offering two years ago to more than $23 a share now.

After three years in rural St. Davids, Tweed Farms is proving pot is not only popular but profitable.