The snow. The crowd. A TV spectacle unlike anything the NHL had ever seen. Crosby vs. Miller in the shootout. The stories of the day are frozen in Sabres annals as one of the most inconic games in the club's history. The game went so well it became the forerunner of one of the NHL's most notable annual traditions. 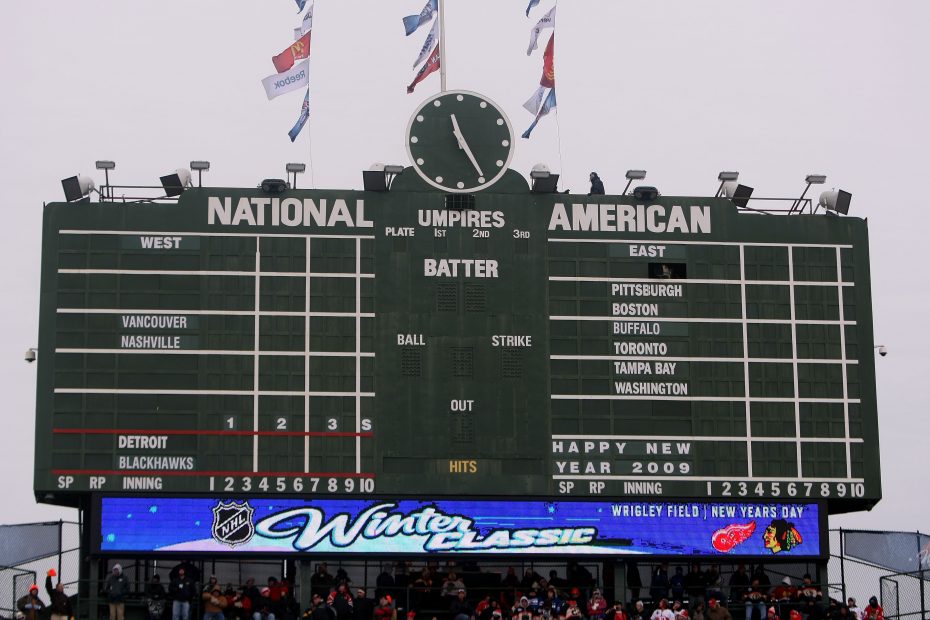 The Blackhawks built a 3-1 lead against the defending Stanley Cup champions but The Friendly Confines didn't stay that way as the Red Wings rallied to score the next five goals and earn the victory. Pavel Datsyuk skated like the wind -- and was helped by the wind -- on a spectacular goal as he split two Hawks defenders. Brian Campbell, who played for the Sabres in 2008, moved on to Chicago and was the first player to play in two Winter Classics.

The Red Wings, who would go on to lose the Cup final to Pittsburgh, wore sweaters from the 1920s with their familiar winged wheel on their shoulders. The Blackhawks' sweaters were from the 1930s. During a commercial break in the third period, Cubs legend Ryne Sandberg joined Hawks greats Bobby Hull, Stan Mikita and Denis Savard in a variation on "Take Me Out to the Ball Game". Some of the words were altered to say hockey instead of "ball game."

The Bruins became the first home team to win as Mark Recchi scored the tying goal with 2:18 left in regulation and Marco Sturm scored at 1:57 of overtime. It remains the only OT goal scored in a Winter Classic. The game featured the first outdoor fight, between Boston's Shawn Thornton and Philadelphia's Daniel Carcillo.

The ceremonial faceoff was held between Hall of Famers Bobby Orr and Bobby Clarke, who met when the teams played in the 1974 Stanley Cup final. The Bruins eliminated the Sabres in the first round of the playoffs that season but then fell to the Flyers in Round 2, becoming the third team in history to blow a 3-0 lead in a series. Philadelphia advanced to the Cup final, losing in Game Six to Chicago on Patrick Kane's overtime goal.

The first Winter Classic to be chronicled in advance by a reality show (on HBO) became best known for the rain that caused a seven-hour delay and the concussion suffered by Sidney Crosby that derailed his career for the next two seasons. Caps forward Eric Fehr scored the tie-breaking goal in the second period and the clinching goal in the third. Pens owner Mario Lemieux joined Steelers legends Franco Harris and Jerome Bettis for the ceremonial faceoff.

A different weather problem -- sun -- caused a delay in the start so there would not be glare on the ice. And there was a dramatic finish as Rangers goalie Henrik Lundqvist stopped Daniel Briere on a penalty shot with 19.6 seconds left after Rangers defenseman Ryan McDonagh was called for covering the puck in the crease with his hand.

The Flyers took a 2-0 lead on second-period goals from Brayden Schenn and Claude Giroux. It was the first goal of Schenn's career. The Rangers rallied as Mike Rupp, now an analyst on NHL Network, scored with 5:09 left in the second period and just 2:41 into third to forge a 2-2 tie. Brad Richards' goal at 5:21 gave the Rangers the lead and they held it over the final 14 1/2 minutes, with Lundqvist's save on Briere becoming the game's signature moment.

No game due to NHL lockout

The biggest crowd in hockey history headed to The Big House on the coldest day in the game's history to see the second Winter Classic to end in a shootout. The Leafs became the first Canadian team to participate in the game and won it on Tyler Bozak's shootout-deciding goal. Detroit's Daniel Alfredsson and Toronto's James van Riemsdyk traded second-period goals, with Bozak and Justin Abdelkader scoring in the third. Abdelkader's goal with 5:32 left forged a 2-2 tie and the teams split four shots on goal in overtime. Detroit had a 43-26 advantage in shots on goal, with Toronto's Jonathan Bernier making 41 saves.

The Capitals improved to 2-0 in Winter Classics while the Blackhawks fell to 0-2 as former Chicago forward Troy Brouwer scored a power-play goal with 12.9 seconds left to give Washington the victory. It was the first regulation win by a home team. The Capitals took a 2-0 lead on goals by Fehr, who tallied twice in 2011 in Pittsburgh, and Alex Ovechkin. Patrick Sharp scored for Chicago late in the first period and Brandon Saad got the tying goal at 3:15 of the second. The shots on goal were even at 35-35.

The Canadiens were winners in their first Winter Classic and third outdoor game (they also played the Heritage Classic in 2003 at Edmonton and 2011 at Calgary). In the most lopsided Winter Classic, former Sabres forward Paul Byron scored two goals as current Buffalo defenseman Nathan Beaulieu joined P.K. Subban in assisting on the second. Former Sabres forward Brian Flynn assisted on Byron's first goal as the Canadiens led, 3-0, after two periods and cruised home.

The Blackhawks fell to 0-3 as Vladimir Tarasenko scored a pair of goals in a span of 1:53 of the third period to snap a 1-1 tie. Michal Kempny opened the scoring for Chicago at 1:02 of the first period but the Hawks were blanked the rest of the way by St. Louis goalie Jake Allen, who made 22 saves. Chicago's Corey Crawford took the loss despite 32 saves. At just over 2.5 million viewers, it was NBC's lowest-rated Winter Classic.