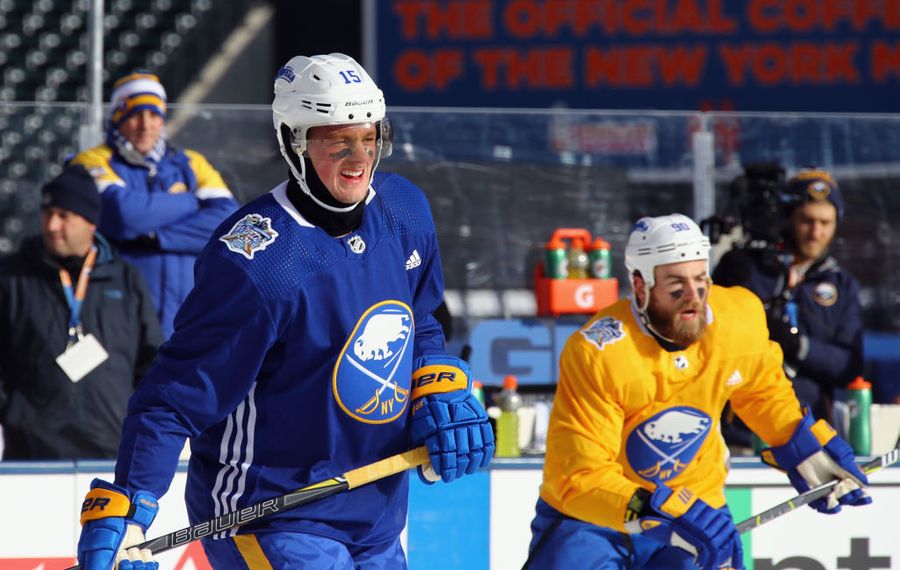 NEW YORK — For nearly a month, Jack Eichel has been a solid player. For the last 2 1/2 weeks, he's been a flat-out superstar.

Something has clicked in Eichel's game. There's clearly more introspection going on, more of the maturity in his 200-foot play that he demanded from teammates after the Sabres' clunker two days before Christmas in Carolina.

"I don't really think I changed too much," Eichel insisted Sunday in Citi Field. "Took a couple veggies out of my pregame meal and switched up some things."

Snark of a 21-year-old aside, Eichel has definitely added more meat to his resume for this season.

With 15 goals, 20 assists and 35 points, he's the team leader in all three categories and is suddenly on pace for a 32-goal, 76-point season. He had eight goals and eight assists in December, making the 16-point month the second-best of his career (next to 17 last March).

Entering Sunday, Eichel's eight goals in December were second in the NHL to the 11 of New York Islanders winger Anders Lee. Eichel's 16 points were tied for sixth. Since Dec. 15, Eichel has an NHL-high seven goals; nobody else has more than five. In those 17 days, Eichel also leads the league in even-strength goals (6) and ES points (10).

The Buffalo Sabres practiced at Citi Field on Sunday, Dec. 31, 2017, before facing the New York Rangers in the Winter Classic on New Year's Day.

You can keep pressing out the numbers, too. Eichel has four goals and seven points in his last four games, seven goals and 11 points in the last six games. Here's another one: Eichel's 29 even-strength points are eighth in the NHL for the season and just five off the league lead of Tampa Bay's Nikita Kucherov.

The math serves as quite a backdrop for Eichel heading into Monday's Winter Classic. It's the biggest single-game stage he's been on during his three NHL seasons, the most media attention he's gotten since the June night the Sabres drafted him No. 2 overall in Sunrise, Fla., in 2015.

Sabres eager to prove they belong in Winter Classic spotlight

Eichel pines to be included on the list of NHL stars. He's gotten excluded from it largely because of his team's poor play the last three seasons. There's no better way to grab attention than to seize it in this game, when the eyes of the hockey world will all be trained for one afternoon on the baseball stadium in Queens.

"You can just see it," linemate Zemgus Girgensons said. "When he's playing a certain way, he's unstoppable. You're on a line with him, it makes hockey fun. He's a fast skater and keeping up with him is definitely a thing. It makes me faster, gets me going more."

"You see the speed, how he can escape guys, how he can hold guys off," added Ryan O'Reilly. "It's a unique skill. To be able to stickhandle and shoot at that speed, I can't do it. He's a guy that can do it all at the same time ... When he's trusting himself, he's a dangerous player and he's been really playing well for us."

Eichel was floating on off shifts far too often earlier in the season. He had one 18-game stretch where he scored just three goals and was invisible some nights. The Sabres were shut out for three straight games for the first time in franchise history but have points in eight of their last 11 games since then.

No coincidence it's happened as Eichel has picked up his play.

"I thought earlier in the year there were times I was playing well and not getting rewarded and I thought the same for our team," Eichel said. "But we've been a more consistent team shift in and shift out and it shows. We've figured out what's made us successful and what we can do to put us in the best position to win. We're all buying in now."

"He's the driving force of this team. There's no question about that," said defenseman Zach Bogosian. "I've been very impressed with the way he's been playing the last few weeks."

The raves carry around the dressing room.

"In games like this and the World Cup and other big games he's played in, he seems to always shine," said Evan Rodrigues, Eichel's Boston University teammate. "It'll be fun to watch him play. He always seems to show up in these big stages and puts on his best performance."

"It gives everybody a sense of confidence and it's fun to watch right now," said Eichel linemate and roommate Sam Reinhart. "We're starting to see everything he's putting at the net seems to be going in for him. He's been playing really well and it's been showing both for him and the team. He's well aware it starts in the 'D' zone and he's been able to clean that up and then take care of things offensively."

There's no question Eichel is going to be the captain of this team, sooner rather than later. You're not going to make any judgments from snippets of a reality show but one thing the NBC cameras have been showing inside the Sabres' dressing room is how Eichel is prominently talking between periods.

Asking around Sunday, the word I got was that it's not creative editing.

"He's definitely one of the leaders in the locker room," Girgensons said. "He's absolutely talking more, taking more charge of it. It's good to see that from him."

"He has experience now after a few years," O'Reilly said. "He's gotten more vocal and is saying a lot of good things."

This game should be right up Eichel's alley. He spent lots of times on the pond in Massachusetts as a youngster, working on his game in the elements. Monday is a chance to show what all that work produced.

"It's pretty amazing how much better you can get just by being out on the ice with skates and a stick and a puck," he said. "You don't need a whole lot. I played a lot of pond hockey growing up. Whether it was me by myself or a big group of guys, it's always enjoyable and I have a lot of great memories doing it."