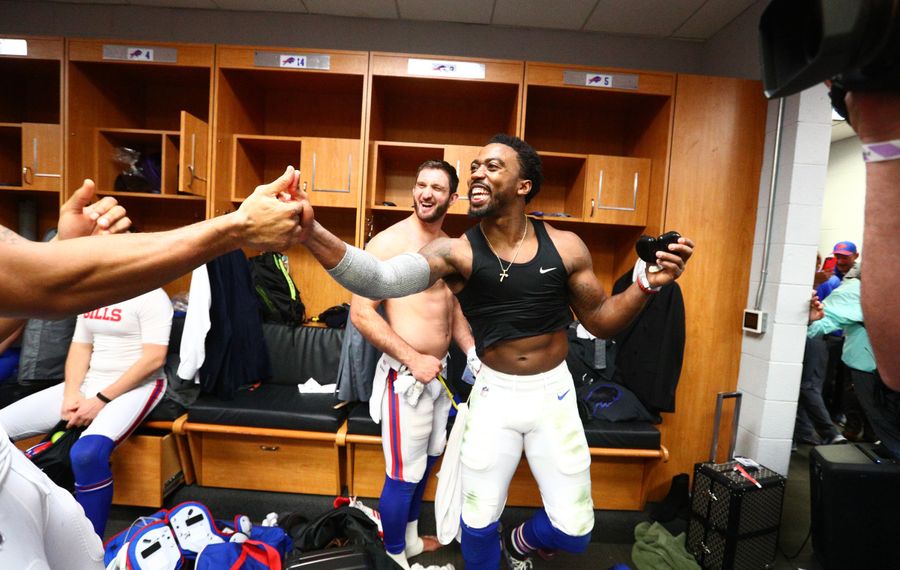 MIAMI GARDENS, Fla. – There was a lot of praying and hand-holding. Sweat mixed with tears. Joy and anxiety were being woven together as the drama continue to build.

All eyes focused on the 32-inch TV screen hanging on the wall at one end of the visitor's dressing room at Hard Rock Stadium. The Buffalo Bills had done their job, beating the Miami Dolphins, 22-16. Now, if only they could get the help they needed in the game that held their playoff fate between the Cincinnati Bengals and Baltimore Ravens.

"We turned it on right away and felt like it was the right thing to do, regardless of what happened for our players and give them a chance to watch it," coach Sean McDermott said. "(There were) a lot of guys praying, a lot of guys just holding hands, and it was just great to have everyone together. (There’s) no way I’d rather end the season than together, whether it was going to work out in our favor or not, and to be able to celebrate, to watch a lot of grown men in that room cry because of where they know they’re going and all the hard work and sweat and tears that have gone into this thing, this is what we work for right here.”

Sure enough, the Bengals delivered by scoring a late touchdown to beat the Ravens. Bills players, coaches, club officials, and team owner Terry Pegula let out a collective cheer.

"We started riding every emotion," center Eric Wood said. "Cincinnati had a few bad plays, then they make the huge play (for the winning touchdown in the final two minutes) and came up with the huge stop and we obviously celebrated pretty hard."

Finally, it was over. The 17-year postseason drought, the longest in North American sports history, was dead. The Bills are in the playoffs. They face the Jaguars next Sunday at 1 p.m. in Jacksonville.

Remember all of that "tank" talk back in August, when the Bills seemed to be trading away all of their talented players to stockpile draft picks that would allow them to build for the future? Remember the widely held assumption that McDermott, the Bills' first-year coach, would prefer to wait for the team to make the playoffs when he had all of the pieces he felt it needed to have sustained success?

"When it got to be 44 seconds on the clock (in the Bengals-Ravens games), I was saying to God, 'Hey, why not just now? Let's just get this over with now,'" McDermott said. 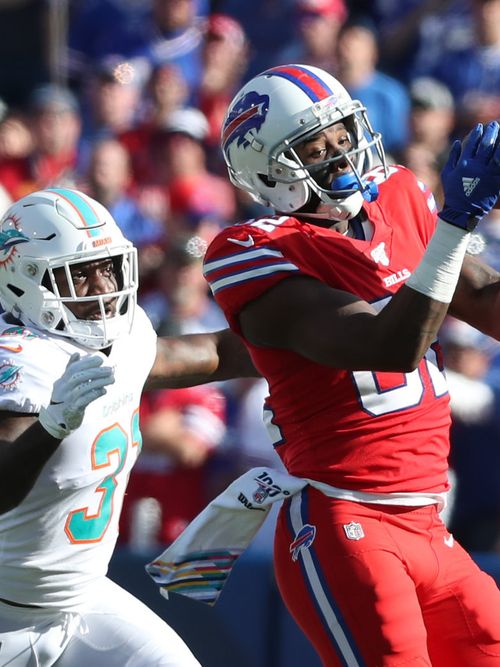 It’s a safe bet that the Bills will look to address the receiver position this offseason, be it through free agency or early in the draft.

Several thousand Bills fans were in attendance, and could be heard chanting, "Let's go Buffalo!" at the end of the game.

"It doesn't get much better than today," Wood said.

Pegula said he heard that fireworks were going off in Buffalo.

"It's the Fourth of December in Buffalo," the owner said. "Obviously, the Bills have achieved something they haven't done in awhile. Hopefully, get a win next week. That's what it's all about – keep winning."

Pegula said he was planning to send a gift to the Bengals.

"We'll have to give that some thought," he said. "It has to be something special."

The Bills made things a bit more difficult for themselves than were necessary. After opening a 22-3 lead early in the fourth quarter, they allowed the Dolphins, behind backup quarterback David Fales for most of the game, to score 13 unanswered points. Tyrod Taylor played his typically strong game against the Dolphins, completing 19 of 27 passes for 204 yards and a touchdown, without an interception. He clearly outperformed Fales, who was inserted after starter Jay Cutler was removed after the Dolphins went three-and-out on the game's opening series.

But the outcome wasn't secure until safety Jordan Poyer intercepted a Fales pass with 49 seconds left.

The Bills could also very well be without their best offensive player, running back LeSean McCoy, for the Jacksonville game and however long their in the postseason. He left the game early in the second half with an ankle injury and didn't return.

But those weren't the primary topics being discussed in a wild dressing room scene Sunday.

It was all about celebrating.

The players celebrated for themselves. They celebrated for long-time veteran defensive tackle Kyle Williams, who will make the first playoff appearance of his 12-year NFL career, all with the Bills. The Bills even designed a special play that allowed Williams to run for a 1-yard touchdown, the first of his career, to give the Bills a 19-3 lead in the second quarter.

And they celebrated for the fans. They were well aware of how much ending the drought meant to the fans.

"I was a nervous wreck for the whole second half," Wood said. "Our game's like a roller coaster towards the end, and I think on purpose the Dolphins stopped showing the Bengals' score, so we have no idea what's going on with that. And my leg wouldn't quit bouncing."

"Really, I just want to praise God, number one," McDermott said. "It was a heck of a year. He continues to bless us, and thank the Cincinnati Bengals as well and (coach) Marvin Lewis."

McDermott and General Manager Brandon Beane still believe they are in the process of building. They don't see themselves as having come close to finishing what they set out to do in the first year in their respective roles.

Still, they understand. They get the fact that a fan base has something to cheer about. They also can bask a bit in the fact that the drought came to an end on their watch.

"It's hard to talk without getting emotional," Beane said. "You felt the weight of the 17 years and to see Kyle Williams score and to see the guys go nuts, that shows how much he means. He is Buffalo. He is the heart and soul.

"We hit a little lull in the middle of the year and to finish strong the way we did, we gave ourselves a chance. That's all you can do."

Now, there is more to do. And it begins next Sunday against the Jaguars.

"This is a start for us," Wood said. "This is a  fresh start for a new season. Everyone (in the playoffs) is 0-0 right now. It obviously feels good to get that one for Kyle, get that monkey off my back."