Ding, dong The Drought is dead.

"It's galvanizing, it's encouraging, it's positive," said Bills Wall of Famer Steve Tasker of the Buffalo Bills' ending the most frustrating chapter of their 58-year history.

"The city makes the playoffs," Tasker said. "The football team just represents it. It's just a great feeling for everybody in the region. I think it's been so long since anyone has felt that, you forget how special it is."

Sunday's 22-16 victory over the Miami Dolphins – along with the Bengals' improbable comeback in the final minute to beat Baltimore – snapped the longest active non-playoff streak in U.S. professional sports – 17 years.

Nobody considers the Bills, with a 9-7 record, a serious threat to win the Super Bowl. But at least they're in the NFL's 12-team postseason tournament for the first time since the 1999 season.

The Bills will visit the Jacksonville Jaguars in an AFC Wild-Card Playoff game on Sunday.

Bills fans worldwide can put to rest The Drought jokes. The Drought was old enough to drive, go to college and serve in the military. Mercifully, it died before reaching legal drinking age.

"I'm happy obviously for guys I played with, guys like Kyle Williams," said Bills great Brian Moorman, who punted for the team from 2001 to 2013. "But more than anything too, I'm just happy for the community. They've supported us for so long all those years when we kind of got close but missed it. It's fun to know the fans are enjoying being in this position again. And that's not to mention the excitement for what the future holds, making the playoffs in Year One of the new coaching staff."

The 17-year drought winds up tied for fifth-longest in NFL history. The longest ever in the NFL was 25 years for both the Washington Redskins (from 1946 to 1970) and the Chicago-St. Louis Cardinals (from 1949 to 1973). The longest NFL drought shifts to the Cleveland Browns, who have not made the playoffs since 2002.

The last Bills playoff game was on Jan. 8, 2000, when the Bills lost to Tennessee in what is known as the Music City Miracle. No one dreamed at that time that the franchise was about to descend into a prolonged dark age.

Fifteen years later, the ‘Miracle’ lingers on for Bills

"It's almost impossible to not make the playoffs for 17 straight years in the NFL," said former Bills lineman Ross Tucker, now an NFL TV and radio analyst. "What's weird about it is, it's not like the Bills have been a terrible team the whole time. It's not like they've been the Browns. They've had a bunch of 7-9 to 9-7 years."

What a long, heart-wrenching trip it has been. The Drought was a product of bad management, poor drafting, the inability to find a franchise quarterback, the dominance of the New England Patriots . . . and bad luck.

It all began when the Bills started the new millennium in a rebuilding mode. Sustained winning throughout the 1990s had prompted a lot of spending on veteran players. The Bills were forced to retrench.

Unfortunately, Donahoe did not create the kind of organizational trust between scouts, coaches and players that existed on the Bills in the 1990s. And he missed on two quarterback decisions, first going with veteran Drew Bledsoe, then anointing J.P. Losman as the QB of the future. 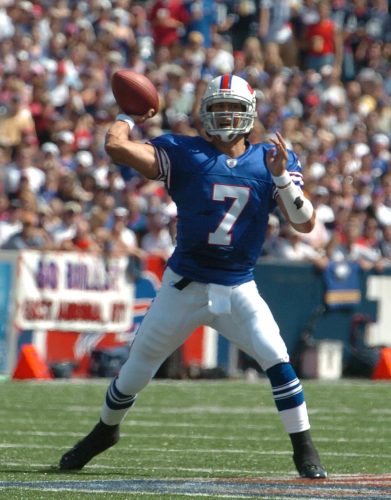 Wilson fired Donahoe after five years. Instead of going back and hiring another veteran general manager with a proven track record, the owner got gun-shy. Wilson's unwillingness to trust his beloved team to an outsider led him to bring back Marv Levy as the new general manager. Levy is a Hall of Fame coach but never ran the personnel side of the team.

The Bills meandered through four years of fuzzy division of powers in their management team. It was not the way winning NFL organizations are run.

Wilson clarified the power structure in 2010 when he hired another former employee, Buddy Nix, as general manager. But Nix and his hand-picked coach, Chan Gailey, couldn't produce a winner.

Then the Bills endured four seasons in which their personnel chief (Doug Whaley) and the head coaches (Doug Marrone and Rex Ryan) essentially were the product of shotgun marriages. They weren't joined at the hip. Again, it was a dysfunctional power structure.

Finally, this year owners Terry and Kim Pegula picked a head coach (Sean McDermott) and general manager (Brandon Beane) who clearly are on the same page. The two had spend several years together in the Carolina Panthers organization, with McDermott as the defensive coordinator and Beane as the assistant general manager.

Expectations were low for McDermott and Beane. Las Vegas oddsmakers projected the Bills' win total at six games before the season.

"I've always said it's going to be one of those years where nobody expected it," Moorman said. "This year I think everybody thought we have a new coach it's going to be a building process, and here we are in the playoffs. It's extra exciting in that sense."

Of course, if the Bills had found an elite quarterback along the way they might have overcome their front-office shortcomings.

But Losman was a dud, and he was followed by Trent Edwards. Not all in the Bills' front office were sold on Edwards, drafted in the third round in 2007. Pro personnel chief John Guy advocated all along that Edwards' ceiling was as a quality backup. Head coach Dick Jauron believed otherwise, which was part of his downfall.

Gailey, a brilliant offensive mind, turned to Ryan Fitzpatrick and got a lot out of the journeyman's ability from 2010 to 2012. But the Bills failed to acknowledge Fitzpatrick's limitations. Then they missed on another QB draft pick, E.J. Manuel, in 2013.

New England's presence since 2001 as perhaps the greatest dynasty in NFL history has made the Bills' path to the post-season more difficult. Still, the Bills might have squeaked into the playoffs somewhere along the way.

"There are a couple years in there where we had some of the top defenses in the league and we were on the cusp," Moorman said. "I know you can look back on any season and say we should have won this game, this game and that game. Any team can do that, I get that. But there definitely were some years where it could have happened and you said to yourself, 'Why did that happen? Why did we walk away from that game with a loss?'"

The best shot was 2004, when the Bills had the No. 7 scoring offense and the No. 8 scoring defense in the NFL. All that team needed to get to the playoffs was a regular-season ending win at home over Pittsburgh, which was 14-1 but did not need to win the game. The Bills (8-7) were on a six-game win streak.

"I remember Marvin Lewis telling me after we beat the Bengals that he thought we could really do damage in the playoffs," Tucker said, referring to Cincinnati's coach.

The Bills led the Steelers, 19-17, early in the third quarter.

"Then we had a series of awful things happen," Tucker recalls. 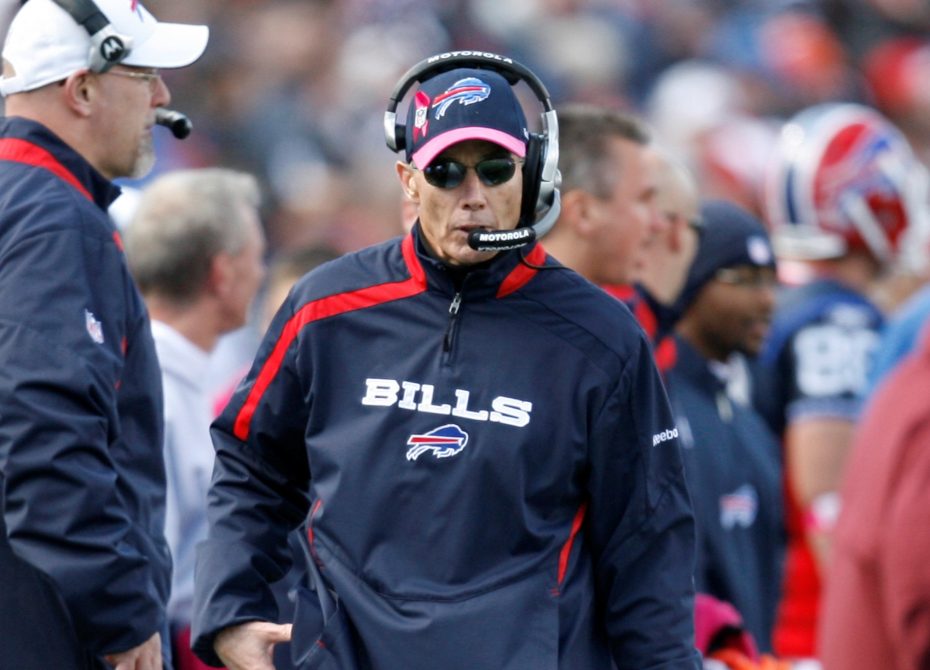 Dick Jauron is one of the faces of the Bills' playoff drought. (James P. McCoy/News file photo)

Rian Lindell missed a 28-yard field goal. Bledsoe gave up a sack-fumble-touchdown play. Sam Adams jumped offsides to negate a key defensive stop. The Bills lost, 29-24, even though the Steelers played mostly backups in the second half.

"Who is this Willie Parker," asked Bills cornerback Terrence McGee, referring to the Steelers back who ran wild that day and would go on to a great career.

"It turned out some of their backups were really freaking good," Tucker said. "I remember going against this guy, No. 92, and thinking, 'This guy is good!' I didn't even know who he was. He made a bunch of plays."

No. 92 was James Harrison, who went onto be NFL Defensive Player of the Year.

Bills diehards can recite a long list of agonizing Bills defeats in The Drought. A 2007 last-play loss to Dallas in which the Bills won the turnover battle, 6-1, and had two interception returns for TDs and a kickoff return for a TD is high on the list. So is a 2009, 6-3 defeat to Cleveland in which the Bills lost despite holding the Browns to 2-of-17 passing for 23 yards.

Finally, events this year unfolded in the Bills' direction.

"Everything starts over when you make the playoffs and you just don't know what will happen," Moorman said.

"Honestly, the way they've played defense this year and created turnovers anything can happen."