NEW YORK — The NHL is looking to strike a balance into its choices of teams and sites for the Winter Classic. That's been its party line for a while and what deputy commissioner Bill Daly reiterated Friday when he visited New Era Field during the World Junior Championships' outdoor game.

Getting the Sabres back into the game for the second time is nice and staging it in New York City for the first time is also cool. Putting the Chicago Blackhawks into the affair for the fourth time next year and the Boston Bruins into it thrice is not cool.

The league needs to do better on this front, as it announced a ho-hum Chicago-Boston matchup for Jan. 1, 2019, more than a year in advance. Now, clearly the Blackhawks are the team you want in the game if you're going to play at Notre Dame Stadium. It's a relatively quick drive from Chicago to campus and the Hawks regularly train there for a few days in September. I get that. But they were just in the game in 2016 in St. Louis.

Their marquee players have to be outdoor-gamed out because they also have played Stadium Series games against Pittsburgh and Minnesota. Their fans have to be, too. Of course, NBC can never get enough of the Blackhawks, Penguins, Capitals, Bruins and Flyers so let's throw a New Year's Eve party.

"It's a balance, no doubt," said Daly, who revealed he was discussing the topic of Winter Classic teams and sites Friday with Horst Lichtner, the general secretary of the International Ice Hockey Federation.  "It's not lost on us the issue about repeat appearances and where you move this game. You have to keep it fresh and keep reinventing the game every year."

Here's hoping the NHL lives by those words. Notre Dame is the kind of iconic venue that works. You keep hearing rumors of Green Bay's Lambeau Field but NFL stadiums are a risk because teams have to give them up during the climactice weeks of the season to let a hockey game in. And how cold might it get in Green Bay? It really can be too cold at times for outdoor hockey.

The league has done outdoor games in weather over 60 degrees in places like Denver and Los Angeles. Why not a Winter Classic in Tampa Bay? The NHL shouldn't shy away from a Western Conference affair either. Make it happen in Vegas. Or Nashville. Or Minneapolis.

Sabres intent on enjoying their time on Winter Classic stage

The venue can help be a draw if the teams are worrisome in that regard. We keep hearing about West Point and the Air Force Academy getting a chance after the Stadium Series game between the Leafs and Capitals that's coming to the Naval Academy in March.

But really now, enough of the Blackhawks after 2019. A marquee event like this should be spread around far more than it has been.

Goalie headgear becames a big focal point in the Winter Classic and it will be interesting if Robin Lehner and Henrik Lundqvist have anything special planned in the way of toques to go with their special masks.

Montreal's Jose Theodore wore a toque to protect against the brutal Edmonton cold at the 2003 Heritage Classic and many goalies have since emulated him. One was the Sabres' Ryan Miller, who wanted to raise awareness for his Steadfast Foundation with a lid at the '08 Winter Classic.

When talking to Miller about his memories of '08, he said the toque he wore that day in then-Ralph Wilson Stadium was nearly nixed by the NHL.

"My Dad and I were talking about starting this foundation and we had this huge event people would be paying close attention to," Miller recalled. "The closest thing we could do to have something on the ice was essentially hockey socks that you could wear on your head. We got some custom-stuff made up, put it together.

"I didn't go way out of my way to throw a sock on my head. We had a chance to use the platform and actually it didn't almost work out. The NHL wasnt thrilled at all until we explained what it was for. They thought I was branding something and I told them it's not for me. It's awareness and a charity thing. They signed off on it at the last second and we got it to go through for the game." 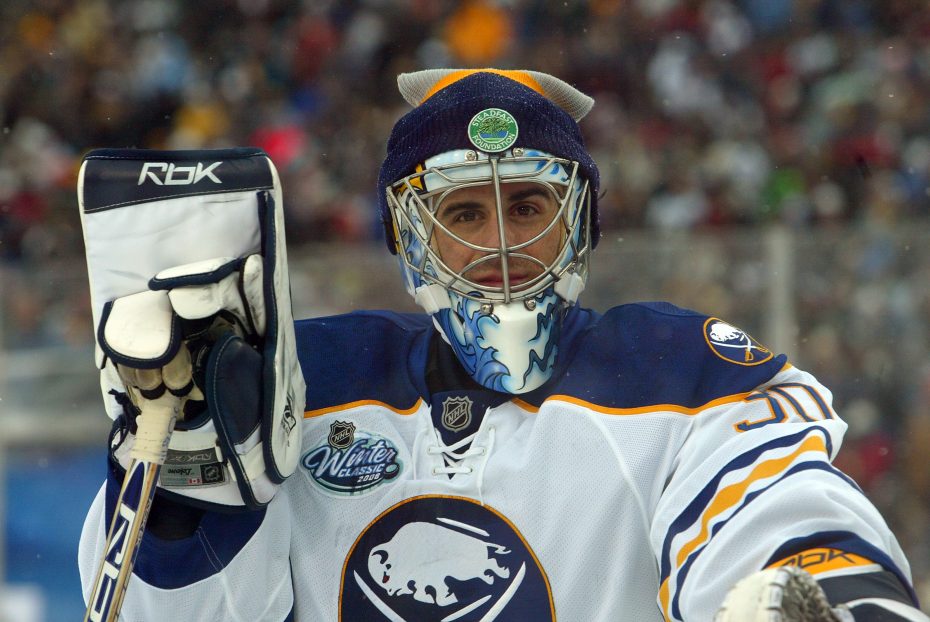 * "The Road to the Winter Classic" is quite a bit more boring on NBCSN than when it was on HBO, Showtime and Epix. Part of the fun was the profanity-laced exchanges on the ice or the coaching rants in the dressing room. All gone now. Boo. And it really needs to be an hour if it's following two teams. Not a lot of depth about anything they're showing, whether it's the Sabres or the Rangers.

* Cody Franson took a cross-check against the Sabres Dec. 8 and was out of the Blackhawks' lineup until Friday's game at Edmonton, including a few games as a healthy scratch as Chicago's eight-man blueline requires two scratches a night. Jordan Oesterle and Michal Kempny slotted in as the Hawks went 5-1 in their first six without Franson, who had spent lots of time on the top pair with Duncan Keith.

"That was my biggest worry, obviously, when I first got the injury," Franson told Chicago reporters "That’s always a worry when you have an eight-man rotation like this, and guys that go in play really well. … That’s always a thought in the back of your mind. Hopefully, you’ve done enough to be able to put yourself in the situation where you go back in when you’re healthy.”

* Discuss among yourselves: Nicolas Deslauriers has four goals in 19 games since Montreal recalled him from the AHL. He had no goals in 42 games for the Sabres last season and six goals in 112 games for Buffalo the last two years.

* Sportsnet's Elliotte Friedman saved No. 31 in his weekly "31 Thoughts" hockey column this week for someone who had nothing to do with hockey -- the late Irv Weinstein. Wrote Friedman: "I grew up in Toronto, but everyone in our city knew Irv Weinstein. 'It’s 11 o’clock, do you know where your children are?' He delivered it with a presence, after the best news theme ever, ABC’s Eyewitness News. He was actually Buffalo’s, but many Southern Ontarians knew him better than their own anchors. Forty years ago, I wanted to deliver a newscast like Irv Weinstein did. R.I.P." Beautiful.

Around the World Juniors

* Team USA star/Sabres mega prospect Casey Mittelstadt on the scene in the New Era Field dressing room with the Americans down, 3-1, to Canada after two periods: "It was pretty loose, kind of funny. Some of the guys were joking around how good a story it would be if we came back and won. ... I'll be hanging with some of these guys years down the road and we'll be talking about it for sure."

Mike Harrington: How soon can Mittelstadt come to Buffalo and stay?

* Speaking at the same dais Bills coach Sean McDermott uses after games, Team USA forward Brady Tkachuk said Team USA had to "trust the process” when it was in its 3-1 hole. Several members of the Buffalo media nearly had to be resuscitated.

You can't say a cross word about #Sabres fans or Canadian fans, who braved the elements outdoors to make that event a special one. As for their no-show otherwise, they've been the smart ones here. The Sabres, USA Hockey and IIHF took them for dopes. They're getting the last laugh.

* One thing noticed at this tournament is how greed outpaced logic. More games should have been at HarborCenter, where a crowd of 1,200 makes for a great atmosphere. Folks who have gone there for games have raved about the setup, the new video board and the reasonably priced food.

KeyBank Center's rep is taking a beating in this tournament, especially as prices for poor concessions and beer are spiked past levels of Sabres games and shoddy service has been the norm. If concessionaire Delaware North is running amok, the Pegulas and Sabres president Russ Brandon should be picking up the phone and telling them to cease and desist.

* Hockey Canada is already showing it's as completely tone deaf as the bright lights running this year's tournament. Already out are ads for ticket packages for next year's tourney in Vancouver and Victoria. Get your packages now for $650 to $2,250. Utterly ridiculous.