Crestfallen over the heartbreaking Super Bowl loss, the 12-year old pleaded with his mother to allow an absence.  His mother declined, and a teary-eyed Santoyo dragged himself to class.

A scene common across Western New York in the wake of the Bills defeat in Super Bowl XXV was playing out 2,500 miles away, in a southern barrio of Mexico City.

Santoyo understood little about the game on his television screen.  Mexico was, and is, obsessed with football by a different spelling.  The sport Mexicans like to differentiate to Americans as “fútbol soccer” dominates the airwaves and playing fields, making it rare for a child such as Santoyo to be exposed to “fútbol Americano.”

Despite not knowing the rules, Santoyo was instantly drawn to one aspect.  “The helmets,” says Santoyo, who fell in love with the franchise the moment he saw the red and blue galloping buffalo.  “Very simple. The logo and colors made me a fan.”

Today, an insurance broker in Mexico City, Santoyo is part of a considerable Bills fan presence in Mexico. Though trailing the Cowboys and Steelers -- Mexico’s de facto national teams -- in popularity, the Bills have staked a claim to a generation of Mexicans whose formative fandom years coincided with the team’s Super Bowl runs of the early 1990s.

A 2015 study from the Mexican football website Primero y Diez found the Bills to be the seventh most popular team in the country, with an almost 4 percent share of the country’s reported 28 million NFL fans.  That same year a Harris Poll ranked Buffalo as America’s 19th favorite team.

Mexicans of an older generation gravitated toward the Cowboys, Steelers and Raiders in the 1970s and more fans under-30 root for the Patriots than any other team (The Patriots played the Raiders in Mexico City on Nov. 19).  For many Mexicans, now in their 30s, the team of choice was the Bills.

With no physical or familial ties to Western New York, these fans have their own support groups -- Bills Backers Mexico and Bills Mafia MX -- to analyze team moves in their own language, plan where to watch the games and organize trips north to see the Bills in person. Bills Backers clubs seemingly have sprouted up everywhere in the United States.

Moving to the central Mexican state of Quertero in 2014, Dietmar Prinz joined the Bills Backers after struggling to find more than a handful of Bills fans to spend fall Sundays with.  He watched as the organization blossomed from around 20 members in 2014 to an estimated 1,400 today.  Through Facebook posts and Bills fan grapevine, the Facebook group took off.

“When you find one member, it is easier to find another, like the branches of a tree,” says Prinz, who now is one of five administrators of the group’s Facebook page.

In Mexico during the early 1990s, one or two football games would be aired each week.  Only the prominent games featuring the best teams could be seen, so a generation of impressionable kids spawned a spirit for Jim Kelly and Thurman Thomas, “The Comeback” and the “Shout” song.

“I played running back when I was young, and I wanted to wear No. 34,” said José Escobar, an Industry Designer in Mexico City who was signed up for one of Mexico City’s few youth football teams at age 6.  “But the number was so popular because of Thurman Thomas.  So I took 33.”

For young Mexicans uninitiated to football in the late 80s and early 90s, there were no first trips to Rich Stadium with Dad or living rooms full of family collectively cheering on the hometown team.  In fact, their living rooms were likely filled with Cowboys or Steelers fans, if any football fans at all.  They did not always have a firm understanding of the game, an appreciation for what made Kelly’s offense so dynamic or Bruce Smith’s pass-rush so devastating. 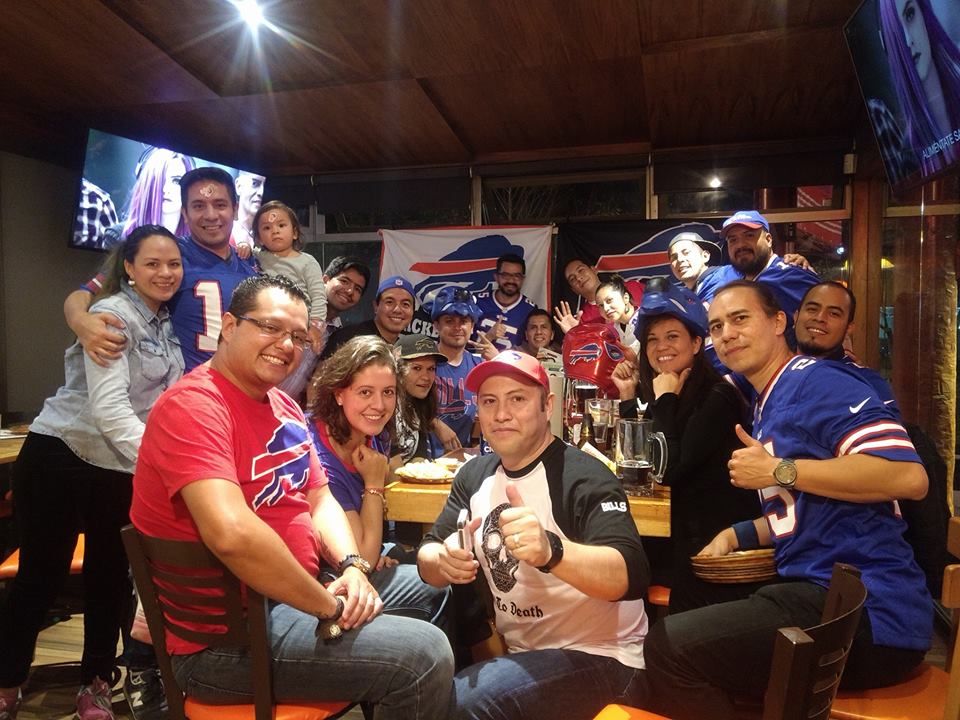 The Bills are among the most popular NFL teams in Mexico. (Submitted photo)

Instead, many fans in Mexico picked the Bills because they were winning or, like Santoyo, for the logo and uniform color-combinations.

The vigor that Bills followers in Mexico bring to their fandom is on par with what you’d find amongst the most avid supporters in Western New York.  The distance between One Bills Drive and the southern border does little to diminish their care for the team. Luis Enrique, a journalist who founded Bills Backers – Mexico in 2011, has never been to Buffalo.

During Buffalo’s Thursday night Week 9 matchup with the Jets, about 10 locals in Bills hats, shirts and jerseys sit scattered among a vast Buffalo Wild Wings in the Colonia Narvarte neighborhood, a trendy central area of Mexico City hard hit by September’s 7.1 magnitude earthquake.

That night, they were eager to see their team build on a surprise 5-2 start to the season.

Escobar arrived optimistic yet cautious, sporting a Bills hat and the dark blue Bills tie he wore to work.  He had seen fast starts to seasons before and knew they rarely end with the playoffs.

Escobar watches every Bills game at Buffalo Wild Wings, Hooters or at home through his NFL Sunday Ticket package.  He has endured the wrath of opposing fan bases for liking a team with the longest playoff drought in the league.  After the Bills blew a late Monday Night game against the Cowboys in a 2007, drunken Cowboys fans began taunting and throwing napkins at Escobar and his group.  He heard “Los mismos Bills como siempre” -- “The same Bills as always.”

Escobar follows team news midweek and during the offseason through team blogs and the John Murphy Show he downloads through the Apple Podcast app.  And despite the Bill’s dismal performance against the Jets, Escobar remained optimistic on the direction of the team.

A dozen times, Escobar has traveled to see a Bills game in person, even traveling with his father to catch road games in Houston, San Francisco, Cleveland and Pittsburgh.  The team is his obsession, though there is still one threshold of fandom Escobar has yet to cross.  Tailgating does not exist in Mexican culture, and Escobar is cool on trying it out.

“Tailgating is kind of too crazy,” he said. “I have seen the Bills Mafia.  I don’t want my table to be broken apart.” 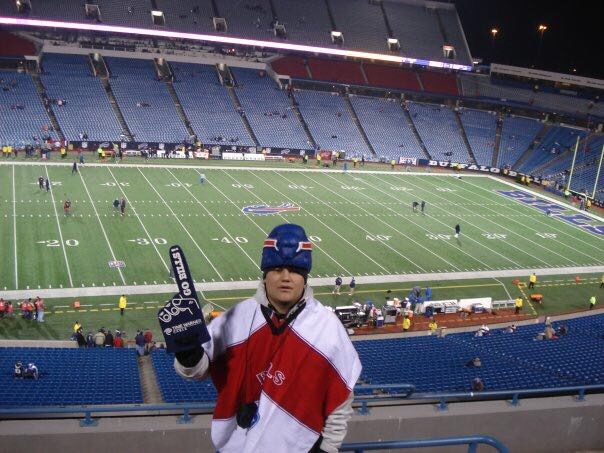 Unlike Escobar, Santoyo has never seen the Bills play in person.  Twice while living in Canada, Santoyo visited the U.S. Consulate in Toronto, seeking a temporary allowance to cross the border to see a Bills game at Ralph Wilson Stadium.  Twice his request was rejected within minutes, his work visa restricting any travel into the United States.  Immigration law resigned Santoyo to watch his favorite team from a Toronto sports bar.

“I know I was farther, but it always felt like I was right outside the stadium and could hear the fans cheering so loudly,” Santoyo says with a soft laugh.

Back home, separated by the other border and a dozen or so Mexican and American states, Santoyo is undeterred in his goal to see the team that almost allowed him to miss school 27 years ago.

Santoyo, promises to be on a flight toward the 716 the day the Bills secure their first home playoff game since 1997.

Escobar, too, has plans for when the Bills make the playoffs.

“I will get a tatuaje right here,” Escobar proclaims, gesturing to the point on his right forearm where he is vowing to get a tattoo. “It will be of the vintage logo. I promise.”