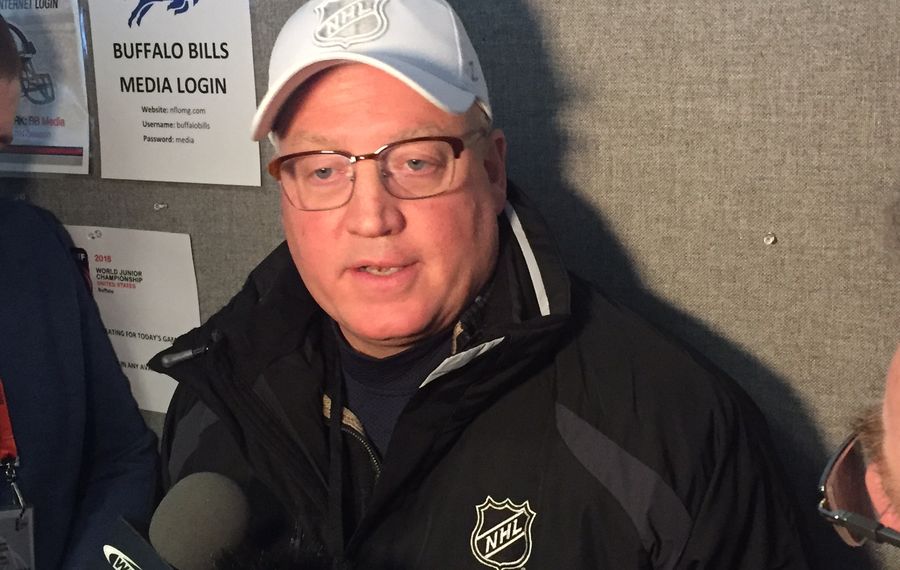 As you might imagine, the NHL is putting on a happy face even though it has one of its bottom feeders in the Winter Classic come Monday in New York. But, in fact, deputy commissioner Bill Daly said the Buffalo Sabres will remain in the conversation to be a part of future outdoor games.

The Sabres will be last in the Eastern Conference heading into the game against the New York Rangers in Citi Field, a fact the league has not had to deal with among participants in its previous nine Classics.

"You can't handicap that in any given year because you make those decisions early on," Daly said during an informal chat with reporters in the press box during the USA-Canada game at New Era Field. "I don't think there's a concern at all. I think the Sabres deserve to be there. They're part of the history of this game. I think it's a compelling matchup on that basis alone. In New York. Intrastate rivals is pretty cool."

Daly said the Sabres could not host this year's game because team and league officials did not want to stage two major events a few days from each other.

"Certainly when we made the decision to put the Sabres in the Winter Classic in New York there was consideration being given to when we come back to Buffalo," Daly said. "I'm sure it will happen at some point in time."

Daly said the league is stoked about its first foray into New York for its Jan. 1 special.  The league played two Stadium Series games in Yankee Stadium in 2014.

"We're excited about it. It's something we've given a lot of thought to over the 10 years of doing these games, having a Winter Classic in New York," Daly said. "Some of the challenges that presents but also all the opportunities that presents as well. We're certainly looking forward to it."

Daly said the snowy conditions Friday had him thinking back to the iconic Sabres-Penguins game here in 2008.

"It's a little colder today but certainly the snow is reminiscent of what we saw in Buffalo 10 years ago ... it's a great backdrop for this game," Daly said. "We got very very fortunate that day, there's no doubt. If it had been 5 degrees warmer and a steady rain instead of snow, I'm not sure we'd be playing these games the way we do now. We got very very fortunate. It was great.

"A confluence of events. It was a great game, a superstar ending it in a shootout in the middle of the snow, so it did capture people's imagination."

By the end of the first period, the lower stands were filled with people and the seats had filled in nicely at New Era Field. But it took a while for those fans to get into the stadium.

A fire on the QEW closed the major highway connecting southern Ontario to Western New York for three hours. Bridge traffic was backed up for over an hour. That caused Canadian fans to arrive later than planned. And the backups continued during their entrance into the stadium.

New Era Field had four gates opened, the normal amount for a crowds between 40,000 and 45,000, said Don Heins, the media contact for Pegula Sports and Entertainment, but the late crush of fans combined with many first-timers to New Era Field unfamiliar with security procedures caused some delays.

The 4-3 shootout win at New Era Field Friday was the ninth win for the U.S. in 46 games against Canada in the World Juniors. It was the fourth straight win for the Americans and second straight via shootout in the rivalry.

The U.S. suffered another injury in Friday's game. Forward Will Lockwood was taken off on a stretcher during the second period. There was no update on his condition after the game. Lockwood did suffer an upper body injury during the U.S. exhibition game at Jamestown.

Logan Brown was injured in Thursday's loss to Slovakia. There was no update on his status.

What's a game without a pause for a video review? After Canada's third goal there was video review. The goal itself by Boris Katchouk wasn't in question. The play was under review as earlier there was a potential hand pass by Taylor Raddysh, but the U.S. played the puck to the blue line, making the continuation of play legal. Therefore, the goal counted.

Cale Makar didn't come into Friday's game looking to be an answer to a trivia question. He wanted to help Canada emerge victorious against a rival.

Instead, he'll have to be satisfied with having an individual piece of history. Makar's power-play goal at 4:13 of the opening period goes into the books as the first goal ever scored in a World Juniors outdoor game.

"It's pretty special," said Makar, who has a goal and two assists in three tournament games. "It's a great experience."

"It was crazy, it was cool, it felt great," Dube said.

Clague, an alternate captain, played a team-high 26:49 and had the second-most shifts for Canada with 35.

"I guess it was just a bad bone bruise," Clague said. "I could barely walk (the other day) and now I feel good. It's positive. I'm ready to play the rest of the tournament."

Like every other participant, he's thrilled to be part of tournament history in playing in the first outdoor game.

"It was a cool experience playing in front of that many fans," he said. "I'll always remember it."