The U.S., reeling from an upset loss to Slovakia Thursday night, rallied to beat archrival Canada, 4-3, in a shootout in the first outdoor game in the history of hockey's World Junior Championship.

Shoveling on skates: A steady snowfall throughout the contest made it a picture-perfect outdoor game, with teams battling in a something of a snow globe at the home of the Buffalo Bills. Several times throughout the game, play was halted as tournament workers skated on to the ice to shovel snow off the playing surface, with some workers skating off with wheelbarrows filled with heaps of snow.

Shootout shutout: The U.S. won the shootout, 4-0, as no Canadian skater could beat goalie Jake Oettinger. He had one save.

To start the shootout, Canada's Sam Steel missed left and USA's Kieffer Bellows scored to give the U.S. control.

In the second round, Robert Thomas was stopped by Oettinger and Brady Tkachuk scored for the U.S. for a 2-0 lead.

Canada finished off the 2018 World Junior Championship with an impressive 3-1 win over Sweden  to capture the gold medal in Buffalo's KeyBank Center Friday night.The U.S. captured bronze, the first time the Americans have medaled in three straigh…

In the third round, Canada again missed with Taylor Raddysh going high.

With a chance for the ultimate storybook finish for Buffalo fans, Sabres draft pick Casey Mittelstadt was stopped by Canada goalie Carter Hart.

The shootout lasted only one more shooter, as Drake Batherson shot wide to the left, prompting Oettinger to race towards his bench, where his teammates bounded over the boards and on to the ice in celebration.

U.S. digs itself out: In regulation, the United States fell into a pair of two-goal holes before coming back to forge a 3-3 tie.

Mittelstadt major stats: Mittelstadt continued his outstanding tournament by recording assists on all three U.S. goals. His was the only assist on both third-period goals while he also had the primary assist on Bellows' second-period goal (with 3:33 to play) that briefly made the score 2-1 (Canada scored 1:12 later to go up, 3-1).

Snowvertime II: This marked the second game at New Era Field which went to "snowvertime" this month, following the Buffalo Bills' 13-7 victory over the Indianapolis Colts on Dec. 10. 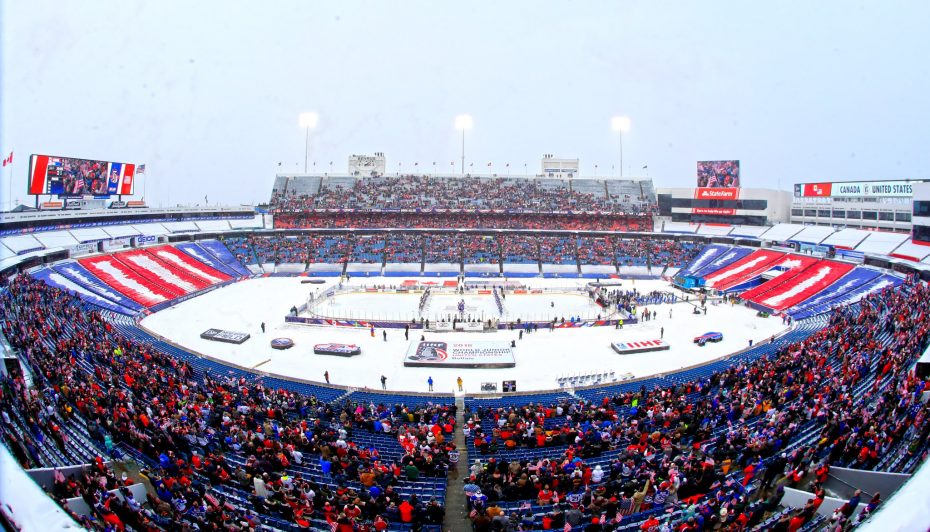 The crowd during the national anthems at New Era Field. (Harry Scull Jr.)

The teams played a five-minute, three-on-three overtime with no scoring. Play was stopped at 2:30 for the teams to switch ends (and there was another clearing of the snow off the ice).

The U.S. is off Saturday; the Americans play Finland at 4 p.m. Sunday at KeyBank Center.

Sunday is the final day of preliminary play. Monday is a day off with quarterfinals being played Tuesday at noon, 2, 4 and 6 p.m. The semifinals are Thursday at 4 and 8 p.m. at KeyBank Center. On Friday, the bronze game is at 4 p.m.; the gold game is at 8.

No Bills game? No problem for these hockey tailgaters at New Era Field

World Juniors outdoor game: What you need to know