So when the World Junior Championship is over, do the Sabres even have to let Casey Mittelstadt go back to the Land of 10,000 Lakes? Heck, can they sign him up to head to New York for Monday's Winter Classic after he meets Finland here on Sunday?

Joking obviously. But he could help right now. And the SickMitts Kid should be playing for real in Buffalo come October. You could easily make the case he should be in Blue & Gold come March, as soon as his freshman season ends at the University of Minnesota.

Now, that's going to be a decision for Mittelstadt and his family and advisors. But Sabres General Manager Jason Botterill, who loves college players and college hockey in general, has to know the gold mine he's sitting on.

For a team as offensively challenged as the Sabres are these days, there has to be no better feeling knowing the best player in this tournament is one of theirs.

Mittelstadt is the MVP of this event over the first four days – and it's not even close.

That's no small statement to make either, when you consider that most scouts will tell you they expect the top five players to be drafted in June in Dallas have all been on the ice here.

Mittelstadt has six points in three games. He had three goals in Team USA's first two games, and then assisted on all three goals in Friday's 4-3 shootout classic over Canada in the snow of New Era Field.

He's got the hands and the vision that can make him a star. And he's got the speed that key players on the current Buffalo roster (think Reinhart, Sam) don't possess nearly enough of.

Reinhart, remember, was a standout in this tournament three years ago in leading Canada to a gold medal on a star-filled team that included Connor McDavid. It's a cautionary tale to not get overly giddy about Mittelstadt.

But it's pretty clear Mittelstadt is simply not going to be satisfied with his play. Team USA was victimized by a stunning clunker downtown against Slovakia Thursday night, dropping a 3-2 decision. In a 3-1 hole through 40 minutes against Canada, the Americans were looking at a potential quarterfinal against mighty Sweden and a pockmarked path to repeating as gold medalists.

But they rallied in the third period on goals from Scott Perunovich and Brady Tkachuk – both set up by Mittelstadt – and won the shootout, 2-0.

"I think yesterday was not very good and I don't think it was very good for our team," Mittelstadt said "We were definitely going to move forward from that. We definitely played better today. I've got high expectations for myself, higher than anyone else. Coming into it, I expect myself to play good and be one of the better players. It's been a good start for myself and obviously we have a long way to go."

Mittelstadt has been very clear to not allow the attention pointed at Team USA to be about him, even with the onslaught of Buffalo and national hockey media talking about the Sabres and playing in the city in general. But he knows.

"Just being here with my teammates and getting to play at home (in the USA) in general is bsolutely amazing," he said. "That adds enough juice to itself."

Now, I know what you're all thinking and I'm here to say stop it. Mittelstadt is not going to pull a Cal Petersen by playing out his time in the Sabres organization while in college and head to free agency. It's a good bet he'll be one and done in college, just like Jack Eichel. At most, Botterill would let him play two years at Minnesota.

Some day, it's entirely possible the Sabres' turnaround can be pointed not to a tank but to the odd selections at the 2017 draft that saw teams let Mittelstadt somehow slip to No. 8 and allowed Botterill to pounce.

"He's an awesome player," said Tkachuk, who netted a tap-in off a Mittelstadt feed to tie the game. "Definitely when you're out there with him, he's making plays."

At 18, Mittelstadt sees the ice like elite NHL players. If you're open, you better expect the pass because it's coming.

"Even during the year, that's the first thing I go to if I feel I'm not playing well," he said. "I go back to stick-handling and my vision. That's the biggest key for me, to make sure that I'm always fine-tuning it.

Mittelstadt even had a chance Friday for his Sidney Crosby moment but let's not pile too much on the kid's shoulders.

With the snow flying – and at the same scoreboard end of the stadium where Crosby famously beat Ryan Miller in that memorable shootout nearly 10 years ago – Mittelstadt could have scored the winning goal in this shootout.

As it turned out, he couldn't beat Canadian goalie Carter Hart when it looked like he had lots of room to shoot. USA goalie Jake Oettinger had told Mittelstadt to stay with his trademark, a simple forehand move. Mittelstadt obliged but had trouble controlling the puck as the snow swirled.

"I honestly think I shot it in a bad piece of ice because I was really about to start celebrating and then it jumped to the side," Mittelstadt said. "I don't know what happened there but Oetter bailed us out." 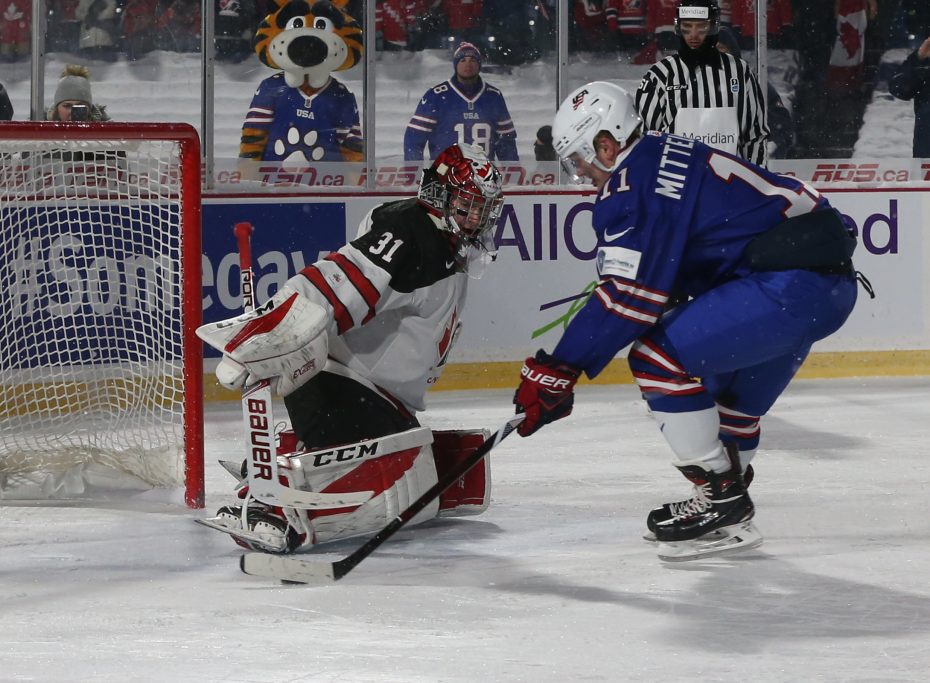 This tournament has been quite the boondoggle organizationally but thankfully, the hockey has been just as good as we've expected. USA Hockey and all the TV partners got the snowglobe they wanted and the announced crowd of 44,000-plus they dreamed of. Of course, they mortgaged the entire tournament proper to get it, but we digress.

The day didn't start well, however, with a truck fire on the Queen Elizabeth Way and brutal delays at international bridges causing thousands of Canadian fans to be late. I guess all those meetings with border officials the last few months got little accomplished.

And once people made it to Orchard Park, fans flooded social media with complaints about being stuck in security lines at the gates. That's something we hear about every week at Bills games as well. Bills officials routinely blame late-arriving fans and the customers constantly tweet pictures of unmanned metal detectors and closed gates. I side with the customers on that one.

By the second period, finally, everyone was in their spots and the snow really started flying. But in a first for the tournament a potential once-in-a-lifetime for some of these players, the show was pretty compelling. Just like Sabres-Penguins, the weather was the First Star.

Said Mittelstadt: "It made it an absolute blast."

Watching him play has been too. More please. For a long time.

Ristolainen's flair for the dramatic comes one game early