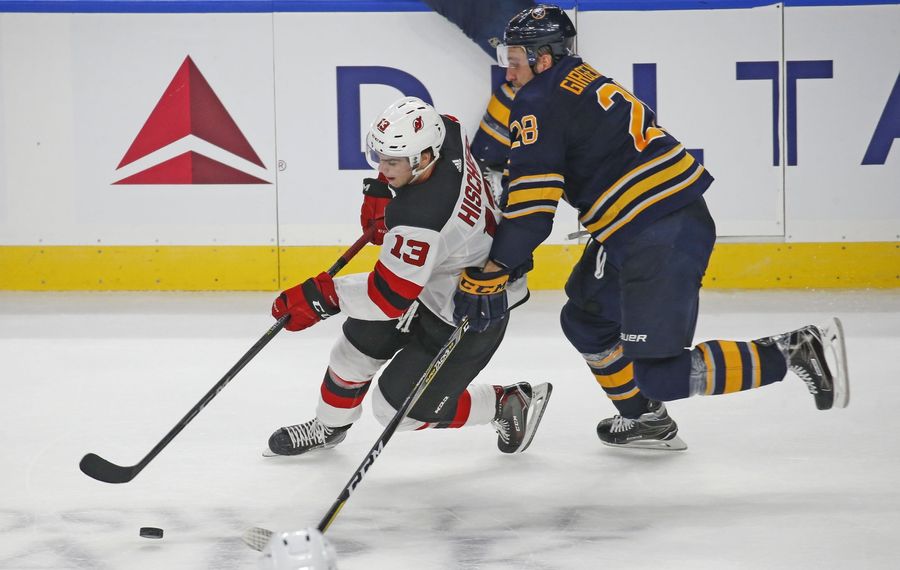 NEW YORK – The Sabres play their biggest game of the season Monday with the Winter Classic. They certainly can't look past Friday's matchup.

Here are Five Things to Know as Buffalo visits the New Jersey Devils in Newark, N.J.

New Jersey is in first place in the Metropolitan Division with a 22-9-5 record. The Devils are closing a six-game homestand, and they're 5-0 in the opening five. They want to make it 6-0.

""It’s important for us,” Devils coach John Hynes said. “The last two games, we’ve played some good segments, but there have been some lulls in our game and some details we think need to be better. We want to finish off strong."

New Jersey is 12-5-2 in Prudential Center this season. The Sabres are 4-10-6 on the road, including Wednesday's 3-2 overtime loss to the New York Islanders. Buffalo fell to 9-20-8 overall.

Buffalo center Jack Eichel has been keying the offense. He has six goals, eight assists and 14 points in the last 11 games. Two of his helpers went to Zemgus Girgensons, who has scored in two straight after going 25 games without a goal.

The Devils' Brian Boyle has seven goals and 11 points in the last 12 games. Taylor Hall has four goals and 10 points in 10 games.

Sabres continue to let their chances slip by

The Sabres' lineup remains littered with lack of production:

* Johan Larsson has no goals and four assists in 31 games.

* Jason Pominville has two goals and two assists in 25 games.

* Benoit Pouliot has two goals and one assist in 19 games.

* Sam Reinhart has no goals and one assist in 15 games.

* Rasmus Ristolainen has no goals and two assists in 14 games.

* Jordan Nolan has no points in 12 games.

The Devils' Nico Hischier, selected No. 1 overall in June, scored twice during Wednesday's 3-1 victory over Detroit. The goals ended an 11-game goal drought.

Sabres defenseman Jake McCabe will play his 200th game. … Devils prospect Joey Anderson is the captain of the U.S. team at the World Juniors in Buffalo. … The Devils are 11-1-5 in one-goal games. The Sabres are 4-5-8. … Buffalo is 1-7-2 in its last 10 games versus New Jersey, including a 6-2 loss at home in October. ... The Sabres did not hold a morning skate.