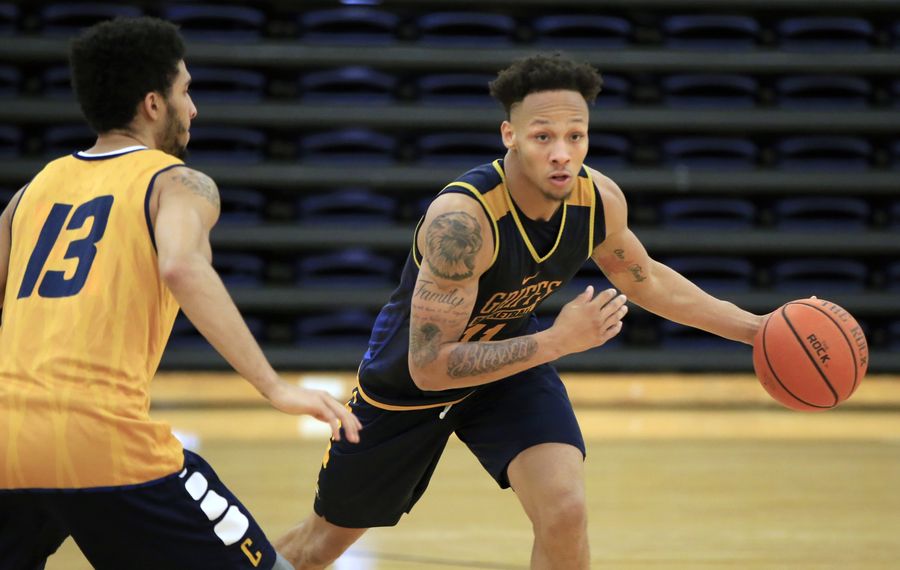 Two years later, Takal Molson would just assume put the whole incident behind him and concentrate on basketball. Time has dulled the anger that came with getting kicked out of high school during his junior year. He's a college freshman now, doing what he does best and covets most.

Molson and former teammate Cameron Dunning never were told why they were suspended and later expelled from St. Mary's High in Lancaster in 2016. At age 17, they reportedly were involved in consensual sex acts with a girl on school grounds. Details of the case never were made public.

Gone was his senior year at St. Mary's, replaced by a year at TAAG Academy in Tampa, Fla. Gone were potential scholarships from big-time programs such as West Virginia that once were interested in the athletically gifted 6-foot-5 guard, replaced by a full ride from Canisius after clearing their admissions standards.

Really, it's all good now.

"It was really tough, but I got through it," Molson said Friday after helping the Griffs (7-7) to a 77-76 victory over Rider (7-6) in their conference opener. "Family pretty much got me through it and kept me focused on the bigger picture. I'm definitely happy. I'm in a good situation, great coaching staff and great teammates."

You can see Molson improving every week with Canisius, where he's starting as a freshman and getting playing time needed to accelerate his development. He was gold for the Griffs on Friday. He had 18 points, 10 rebounds, three assists, no turnovers and a key block Friday before 1,049 fans in the Koessler Athletic Center.

Canisius nearly had one slip away after building a 10-point lead in the first half and falling apart just long enough for Rider to climb back into the game in the second with a 14-0 run. The game was undecided until Anthony Durham's jumper glanced off the rim as the buzzer sounded.

"They just kept coming, and we couldn't break their spirit," Canisius coach Reggie Witherspoon said. "I kept telling the guys, 'We need to break their spirit.' It was like watching a boxer. You're hitting them with everything, and they're still standing there in front of you. You have to prepare yourself to go the distance."

Molson is prepared for just about anything. He can play guard and forward and score inside and out. He was playing small forward when he took a pass near the foul line and drove for a reverse layup to give Canisius a 70-69 lead with 5:50 remaining while the Griffs were still recovering from a horrendous spell on both ends.

He learned how to take a punch while growing up in the Perry Projects along South Park Avenue. No matter how long the journey to Canisius, he found the right fit under Witherspoon and will only get better with experience. Already, he has shown the potential to become a star in the Metro Atlantic Athletic Conference.

If they're going to compete against the better teams in the conference, they'll need him and others to produce. They can't expect proven scorers Isaiah Reese and Jermaine Crumpton to lead them every night. The reminder came Friday, when Canisius shot 33 percent in the second half.

Reese struggled to find his shooting touch and scored 15 points after going 5 of 15 from the floor. Crumpton had a game-high 20 points, including a critical three-point play after taking a pass from Molson that gave the Griffs a 76-74 lead with 1:23 remaining. Molson earlier blocked a shot that kept Canisius in the lead.

" 'Tock' has been really impressive, man," Reese said. "He had the big double-double. He does it every day in practice, so it's not a surprise to me. He definitely doesn't play like a freshman."

Molson played 35 minutes Friday, allowing Crumpton to take a much-needed breather in the second half, because he's so versatile. Molson gave away several inches while guarding 6-8 forward Frederick Scott and 6-9 center Tyere Marshall while Crumpton was on the bench.

At times, he was lost while playing forward against Rider's zone defense. Still, he found seams and managed to get himself or his teammates into scoring position in the lane. It was hardly a first. Molson had 25 points, most ever in school history for a true freshman in his debut, in a season-opening loss to UB.

But with him comes with the inconsistency common among young players. He had only four other games in which he scored in double figures before scoring 13 in the first half Friday. He averaged 19.1 points and 7.1 rebounds per game at St. Mary's before the school sent him on his way.

Clearly, he found his way home.

Molson's signature tattoo on his right arm reads "Family" in honor of the people who supported him the most in recent years. Several family members attended the game Friday, as they do every game, making sure his life remains in order while knowing they need not worry about his game. It's all good.

"I just come in with the mindset in practice, just go hard and things will work out," Molson said. "Go hard, keep putting in the work and things will fall into place for you. Family plays a big role. They're always deep in the stands, cheering for me, and I'm definitely hearing them. Having them in my ear is definitely good."