It was a television year that featured Oscar confusion, a local anchor channeling Lazarus, a sportscaster's goodbye that will forever be known here as The Big Filipowski and some "Marvelous" television shows.

It also was a year in which one local TV news legend died, one potential national television news legend from Buffalo has arrived.

The death of broadcast giant Irv Weinstein this week and the debut of Town of Tonawanda native Jeff Glor as the anchor of "The CBS Evening News" earlier this month were two of the top stories of the year.

But here are more highs and lows and oddities in TV that caught my attention in 2017:

Dueling Promos: After the November sweeps ended, Channel 4 and Channel 2 both declared themselves the news winners. It wasn't Fake News. Channel 4 won in households, Channel 2 in demographics.

The Bananas Game: The Buffalo Bills' 13-7 victory over the Indianapolis Colts in the snow, which CBS analyst Adam Archuleta declared as "bananas" because of the conditions, was the second highest-rated Bills game since meters arrived here in 2000. The 46.7 rating is about three times the rating for the highest-rated prime time regular entertainment program. 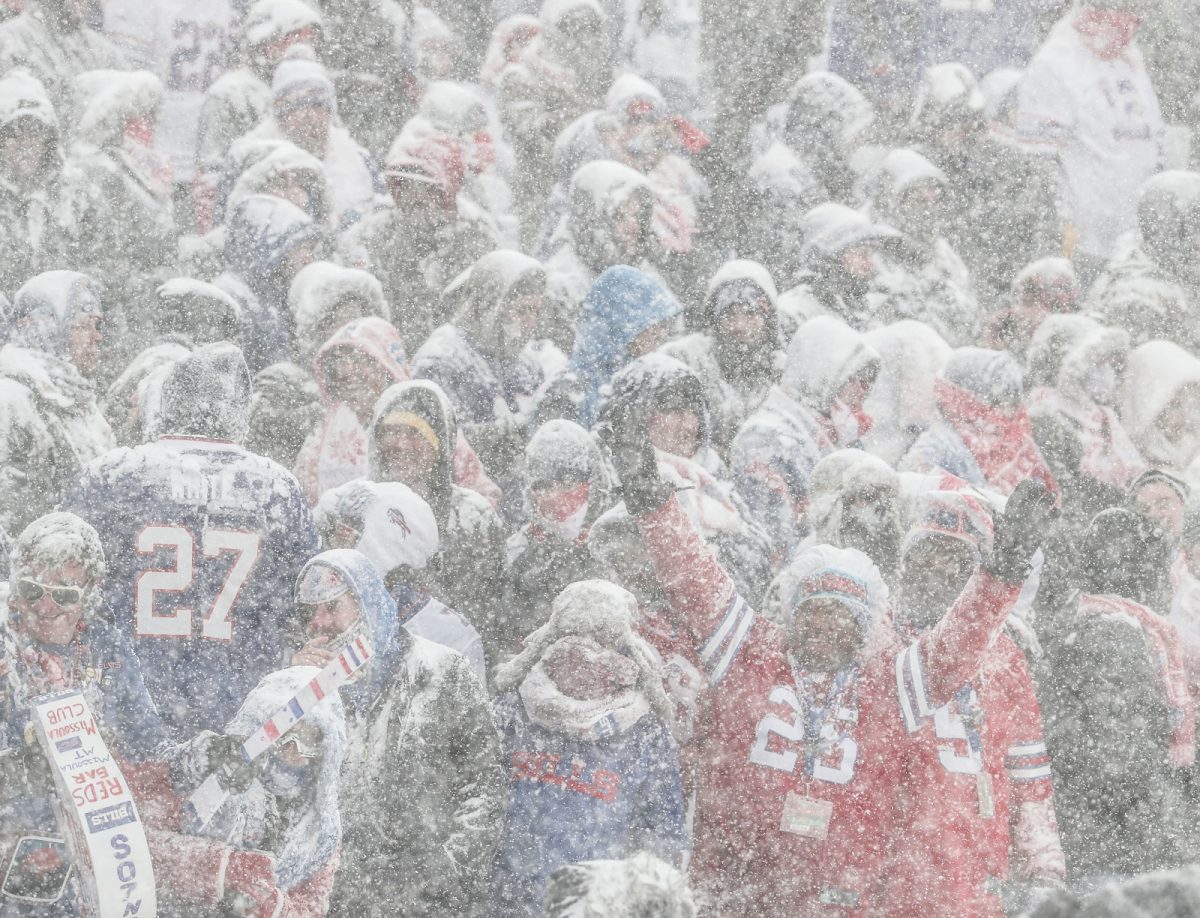 Fans at the "Snowvertime" game between the Bills and Colts. (James P. McCoy / Buffalo News)

The Brady Bunch: The greatest-ever quarterback led Western New York to its Greatest Ever Super Bowl rating since meters began measuring audience here. New England's 34-28 overtime victory over Atlanta in the 2017 Super Bowl led by quarterback Tom Brady had a 57.2 local rating during the game.

Call Him Lazarus: WGRZ-TV anchor Scott Levin decided to leave TV for the automobile business and lasted about three months before realizing "This Is Home" and coming back to Channel 2. At the end of his first 11 p.m. newscast, Levin told co-anchor Maryalice Demler: "Just call me Lazarus."

Sports Trade: Veteran Channel 2 sports director Adam Benigni appeared in line to be Levin's replacement after doing a good job as his temporary replacement. When "Lazarus" decided to come back, Benigni decided to stay in news as the co-host of 'Daybreak" after investigating his prospects elsewhere in the market.

Great Scott: Channel 2 reporter Scott Brown, a terrific storyteller, died after a battle with cancer. I once wrote Brown was "one of the station's best," which led to some good-natured kidding between Brown and Levin. "I always reminded him jokingly that he was just 'one of the best, not THE Best," Levin wrote in a text.

The "one of the best" line might have shortchanged Brown. Brown was one of the two best reporters at the station. (Everyone else at the station can think they are the other one).

Hometown Slight: The owner of Channel 4 and WNLO-TV (Channel 23), announced that it is starting a new 6:30 p.m. weeknight newscast in January co-anchored by Dave Greber and Christy Kern will compete with Glor's national newscast.

Stations are looking to produce more local programming because they can sell more ads on shows they own. That's one reason Channel 7 has begun carrying "The Now."

MVP: Former Dallas Cowboys quarterback Tony Romo replaced Phil Simms as CBS' top NFL analyst and immediately made television look easy. On the other hand, Rex Ryan, who was considered a TV natural, has proven to be anything but.

Oh, My! Sportscaster Dick Enberg died a few days before Irv. He was as big a national TV legend as Weinstein was a local one.

The Long Goodbye: Channel 2's John Beard really, really plans to leave "Daybreak" in January after changing his mind a few times in the past. A political career or a radio talk show career may follow.

When Channel 4 sportscaster Tom Martin left for a job in Kansas City, Filipowski was hired by Channel 4, where he seems to have improved significantly.

Titanic Changes: Channel 7 is rearranging its weather team, moving Andy Parker to the evenings, chief meteorologist Aaron Mentkowski to the morning show and Autumn Lewandowski to another of Mentkowski's former assignments, the 7 p.m. weeknight program "The Now." The moves may have been made because Parker has more personality and is livelier than Mentkowski.

Morning News: Popular WIVB-TV (Channel 4) "Wake Up!" anchor Brittni Smallwood left the station shortly before having a baby and shortly after the station hired Melanie Orlins to be the permanent co-anchor alongside Jordan Williams. So far, the switch hasn't worked. 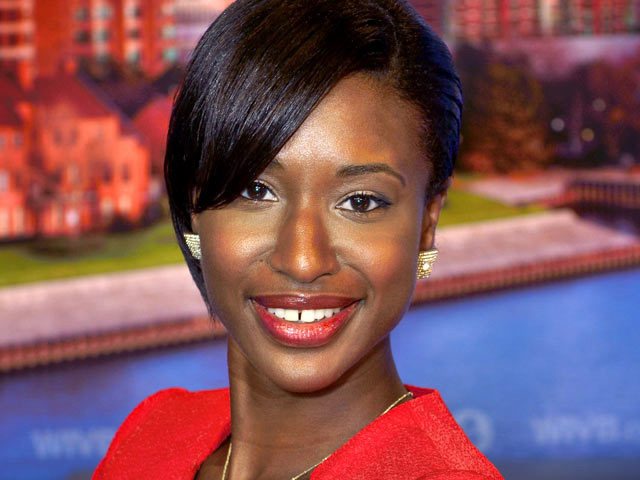 Former channel 4 reporter Brittni Smallwood left the station in 2017 and took a job with Roswell Park.

The Voices: Channel 4 is trying the ears of viewers with the nails on blackboard voices of relatively new hires  Kern, Orlins, meteorologist Kaylee Wendt and sportscaster Shannon Shepherd.

Election Winner: Greber performed so well on election night and in an extended stay as a substitute for the ailing Postles that he got a permanent anchor slot.

Olympic Move: Channel 2 sportscaster Jonah Javad accepted a job at a Dallas station and is leaving after NBC's coverage of the Olympics ends in late February.

"The Good Doctor": ABC scored a hit with a drama featuring a brilliant autistic doctor that had a very strong and emotional pilot and since has had hit-or-miss episodes.

Disappointment of the Year: It is a ratings hit, but "Young Sheldon," the CBS' comedy spinoff of "The Big Bang Theory," has gotten awfully old awfully fast and provides very few laughs. 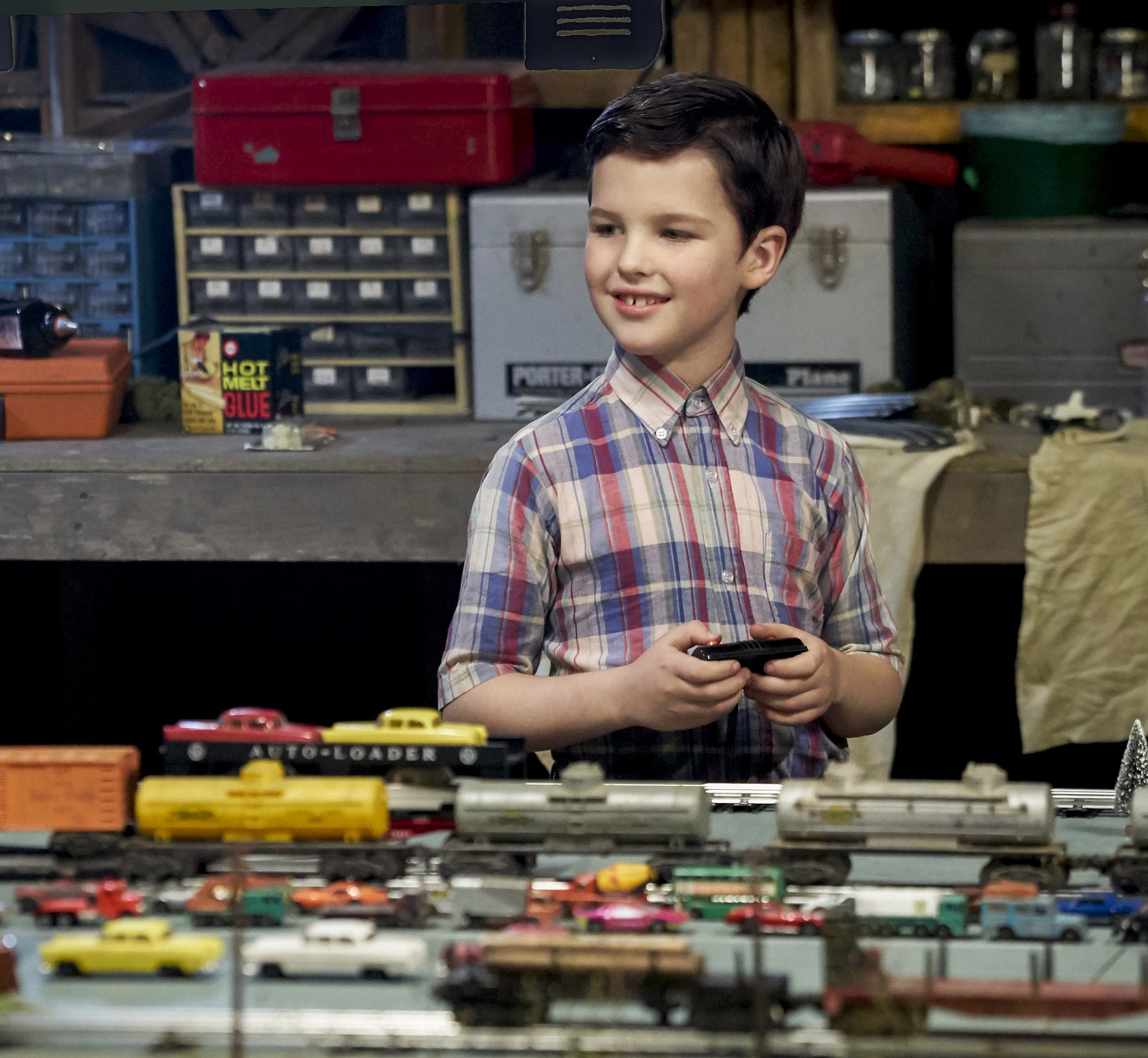 Iain Armitage plays the young Sheldon Cooper in the CBS spin-off of "The Big Bang Theory." In "Young Sheldon" he plays the 9-year-old Sheldon who is attending high school. (Robert Voets/CBS ENTERTAINMENT)

Everybody Loves a Parade: The Buffalo market had the highest-rating for NBC's coverage of Macy's Thanksgiving Parade.

Gronked: New England Patriots tight end Rob Gronkowski appeared in pigtails in one comical ad and with his brothers in an episode of "Shark Tank." But he may have endangered his commercial value by delivering a cheap shot to the head of Bills cornerback Tre' Davious White.

Tearjerker of the Year: NBC's family drama, "This Is Us," explored several dark themes and delivered a boatload of tears. My favorite moment of the fall: The speech by a judge – overwhelmed by the despair he constantly sees – to Randall's father before giving him a break.

The Funeral: Whether the tragic accidental death of Buffalo Police Officer Craig Lehner received more media attention than warranted may have been debated inside newsrooms, but TV viewers voted no. The combined rating of 15.6 on the three local news stations was higher than all but a few prime time programs get on the same day they air.

War is a Helluva Story: PBS documentary filmmaker Ken Burns exploration of "The Vietnam War" – which featured war footage, tapes of presidential recordings, poignant letters from and interviews with American veterans, government officials and award-winning journalists, as well as subtitled interviews with Viet Cong and North Vietnamese veterans – led to a debate over whether it was Burns' best work ever.

Fake News: Channel 2 ran one of its silly unscientific viewer polls asking viewers if the NFL player protests changed the likelihood that would attend or watch a NFL game. At one point, 72 percent of the voters said the protests would make them less likely to attend or watch. If the Bills get a big number for Sunday's regular season finale, they could almost match the 2016 season average here.

Award Winner: NBC late-night host Jimmy Fallon had a much better night hosting the Golden Globes than CBS late night host Stephen Colbert did hosting the Emmys in 2017. But Colbert had a better year overall, thanks to his constant attacks on President Trump.

Polarizing Moment: Former White House press secretary Sean Spicer. Spicer came on near the end of Colbert's Emmy opening to laughably declare the Emmy audience would be the largest in the world, playing off what he said on the day of Trump's inauguration. In our polarized world, that funny joke sparked some Twitter outrage by people offended that Spicer would make fun of misleading the country to soothe the ego of his boss.

Bleeping Problems: One of Colbert's devastating monologue attacks of President Trump included a crude word that was bleeped out. When the word was later revealed it led to suggestions that Colbert was being homophobic and calls for him to be fired. He gave a Trump-like, non-apology the next night, saying that he'd do the monologue again but would have changed "a few words that were cruder than they needed to be."

Big Brother Is Watching: Grand Island's Mark Jansen made it to the final nine of the CBS reality show "Big Brother." 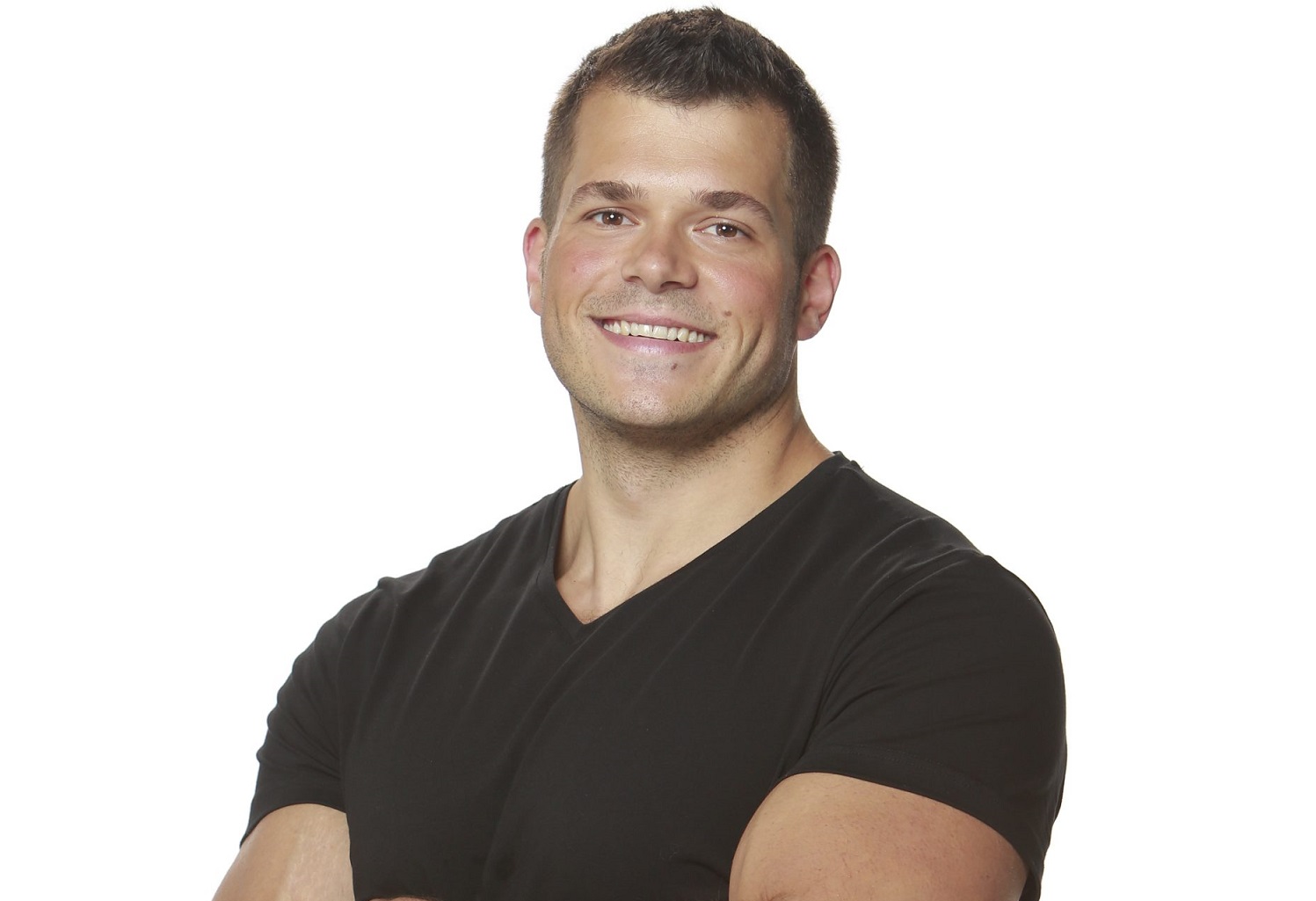 Political Event of the Year: The testimony of former FBI director James Comey in a Senate hearing detailing his uncomfortable and awkward dealings with President Donald Trump had a 14.8 local household rating that would have made it the No. 2 2 program locally in prime time during the May sweeps.

Unwarranted Fears: Channel 4 staffers were concerned when they heard cost-conscious Nexstar was buying the station but those fears have become unwarranted. Dominic Mancuso, the new general manager, has hired many staffers, changed the management culture into a positive and returned a traditional sportscast to the 6 p.m. news.

"Moonlight" Confusion: The Oscar telecast hosted by ABC's Jimmy Kimmel had one of the biggest snafus in history when "La La Land" was initially and wrongly declared the winner of best picture over the real winner, "Moonlight."

These Shows Were Marvelous: I apologize if your favorite show isn't on the list because I can't see – or remember -- everything. I was prone to watching more streaming shows than broadcast network shows: My list of favorites include "The Marvelous Mrs. Maisel, "13 Reasons Why," "GLOW," "This Is Us," "Master of None," "Saturday Night Live," "The Americans," "Jimmy Kimmel Live," "Last Week Tonight with John Oliver," "Big Little Lies," "Blue Bloods" and "The Late Show with Stephen Colbert."