Buffalo's warming shelters for the homeless are packed, and the bitter cold temperatures appear to be with us for some time.

The temperature is expected to remain in the single digits to below zero and made worse by a dangerously low wind chill. The National Weather Service predicts similar conditions continuing without much of a let up in sight.

That's Code Blue weather, setting off the city's emergency weather safety plan for the homeless. Warming centers have been caring for 130 to 150 people a night, offering warm food, haircuts, a shower and laundry, dry socks and links to social services.

"The challenge is really great," said Jean Bennett, chairwoman of the Code Blue Collaborative, an organization of about 30 members that formed to provide warming centers to the homeless. "We're very organized and have well-trained people, but it's an elaborate process to prepare all the services with repeated nights like this."

Two warming centers operate in the city from 8 p.m. to 8 a.m. daily when temperatures hit 32 degrees or below, including wind chill. They are located at the Matt Urban Hope Center , 385 Paderewski St., and St. Luke’s Mission of Mercy, 325 Walden Ave. Matt Urban's capacity is 70 people, and St. Luke's is 40.

Restoration Society's Harbor House, 241 Genesee St., operates a daytime warming center from 8 a.m. to 8 p.m., and has been handling 50 to 75 homeless individuals a day.

When the temperature decreases to 15 degrees or below, again taking wind chill into account, Harbor House extends its hours from 8 p.m. to 8 a.m. to handle overnight stays. The facility contains 20 cots, but has been taking in about 50 people a night, said Bennett, who is director of homeless and housing services at Restoration Society Inc.

Prolonged exposure to cold temperatures can cause serious or life-threatening health problems. These include hypothermia, when the body’s core temperature drops below normal, and frostbite, which can cause loss of feeling and permanent damage to the fingers, toes, ears and nose. 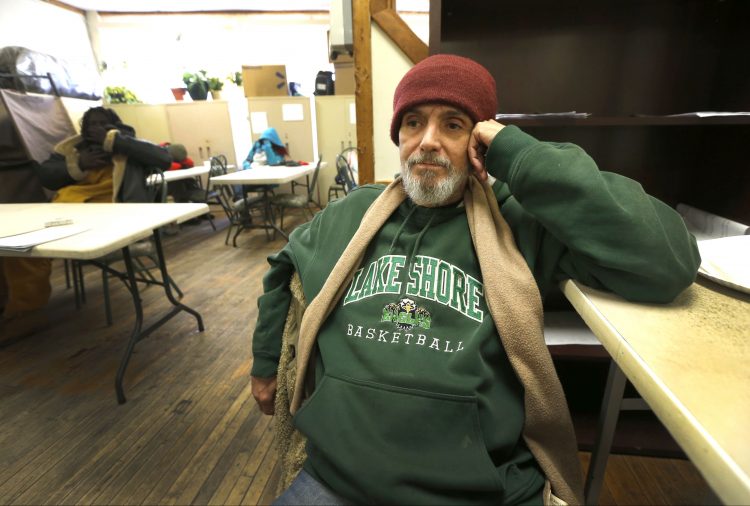 Homeless and no place to turn, Mitchell Gaffy, 53, originally of Angola waits out the freezing temperatures at the Harbor House at 241 Genesee St. that opened its doors during our recent cold snap and Code Blue status for those on the streets. (Robert Kirkham/Buffalo News)

The homeless initiative also offers a link to basic medical care through UB Heals, a program conducted by medical students and faculty from the University at Buffalo Jacobs School of Medicine and Biomedical Sciences.

Last year, when the shelters served more than 600 individuals, was one of the first in recent memory in the city without a weather-related fatality, Bennett said. That's not a simple accomplishment, even with the centers, because some homeless people are unwilling or unable to use the centers.

"For a variety of reasons, there are individuals who remain reluctant to come in. They will stay under a bridge, in a park or in an abandoned building," she said.

That's why the initiative also includes an outreach effort, with a van donated by Rich Products that follows a two-hour route each night finding homeless individuals and steering them to the shelters.

The Code Blue initiative, which receives $55,000 annually from the city, operates from mid-November to early spring. Individuals can also call 211 to obtain help for someone who needs warm shelter in cold weather.

"This is a costly and time-consuming service, and it's difficult to put together ," she said.

The Homeless Alliance of Western New York counted 8,272 homeless individuals in its 2016 annual report on the state of homelessness in the region, with more than 70 percent of them in Erie County.

The American Red Cross at times opens temporary shelters, but does this after crises, such as the electrical power failure Wednesday in the city's Kaisertown neighborhood.

As for the weather, it's going to stay bitterly cold. There is a brief warmup, of sorts, forecast for late next week, with temperatures rising into the 20s. But the temperature looks like it will dive down once again.

Here's what to expect in the next 36 hours – and beyond:

The morning hours will bring a light, scattered snow to the area with new accumulation of less than 1 inch.

But in the Southtowns and Chautauqua and Cattaraugus counties, there's the possibility of another lake-effect event.

There is a winter storm watch for Southern Erie County and Chautauqua counties through Sunday morning. Amounts could exceed a foot near the shoreline, with the heaviest snow expected through Saturday and potentially creating snowy conditions at the USA vs. Canada outdoor game in the World Junior Championship scheduled for 3 p.m. Friday at New Era Field in Orchard Park.

A high of 18 is expected, along with some widespread snow in the Buffalo metro area and possible lake-effect snow in the Southtowns and Southern Tier. The low will be around 4.

It's going to be partly sunny, with a small chance of snow showers, and especially cold outside., with a high near 7 and a low around 0 when the ball drops at the Electric Tower at midnight. The record is 0 and was set in 1970.

Mostly cloudy and cold, with a chance of snow showers and a high near 10.

The Lake Erie temperature has dropped to 33 degrees, which could produce a lake freeze by the
end of December. If that happens, it would be the first time the lake has frozen over in December since
the year 2000, when the lake froze on Dec. 31, according to the National Weather Service.

How to avoid common weather woes in bitter cold temperatures

What to expect in the next 36 hours: Deep freeze lingers, possible lake-effect snow Friday