A groundbreaking documentary about the role of indigenous people in rock music took international awards. A pair of amateur archaeologists drew closer to solving some of the mysteries of an opulent abandoned estate on Lake Ontario. A dynamic new director at the Niagara Falls Public Library faced the challenge of  budget cuts as she began to expand services.

And Niagara Park Police officers continued the painstaking work of identifying the bodies of people who were discovered in the Niagara River and Lake Ontario, with some success.

Here's a look back at some of the most significant and popular stories of 2017.

"Rumble: The Indians Who Rocked the World"

Tim Johnson of North Tonawanda, executive producer of "Rumble: The Indians Who Rocked the World," looked back on the documentary's successes in 2017, starting with a prestigious award and ending with a showing at the Shaw Festival.

"The film had a great run," Johnson said.

Over the summer, the film was the inspiration for two live concerts. The first was staged in Oakes Garden Theatre, with Niagara Falls as the backdrop; the second, the Rumble Unity All-Star Jam Session, was held at the FirstOntario Performing Arts Centre in St. Catharines. Kenny Lee Lewis of the Steve Miller Band and Derek Miller, a two-time JUNO award winner, were co-leads. Based on the success of these two performances, Johnson said a touring concert is being considered to launch in Ontario, then across Canada and the United States.

The documentary will be shown starting at 6 p.m. on Jan. 19 in the Shaw Festival Theatre as part of the Shaw Film Series. After the film, Shaw Artistic Director Tim Carroll and Johnson will host a discussion with Derek Miller. Johnson noted that Miller "is bringing along his guitar."

A fascinating story of decaying opulence and splendor emerged from the brush, weeds and trees in Golden Hill State Park in Somerset between 2016 and 2017.

Mike and Cheryl Wertman of Medina, who first visited the long-abandoned lakefront estate as part of a 2015 park cleanup, discovered many remnants of a luxurious estate on the site when they began to clear away brush and weeds. 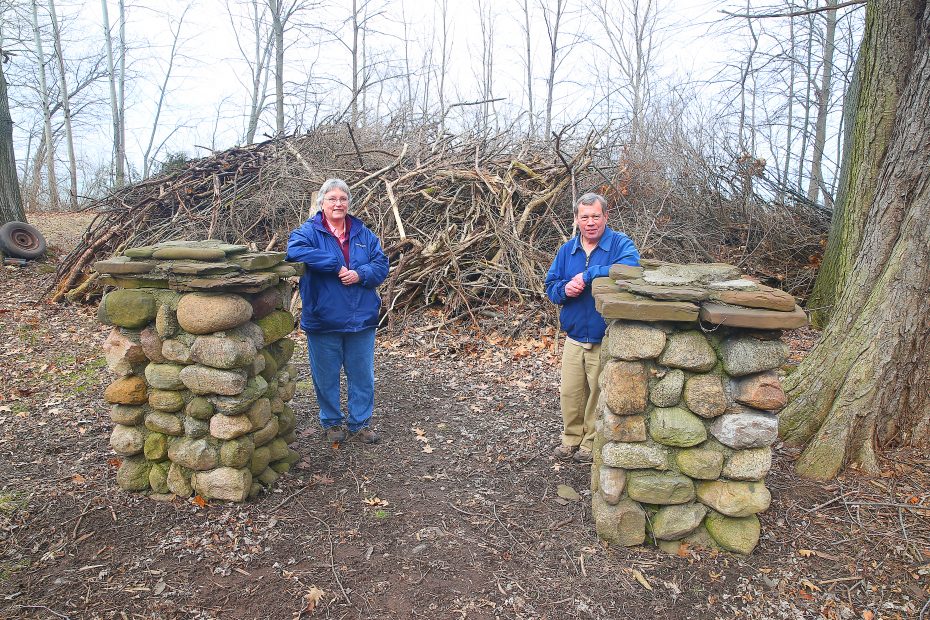 Cheryl and Mike Wertman stand by two pillars made of river or lake stones that wre hidden in the brush of the abandoned and bulldozed Twin Locust Lodge. Behind they is one of the many brush piles they have built. (John Hickey/Buffalo News file photo)

They found stucco-faced walls, a herringbone brick patio, whimsically tiled walls, and a rose garden, outdoor tea room and fish pond.  After the first story appeared about the estate, research revealed that it was once called "Twin Locust Lodge."

As the couple continued to clear brush, dig out a 50-foot-long stone pathway and document their findings, the New York State Bureau of Historic Sites and Parks Service assigned a conservator to the site, said Cheryl Wertman.  "In 2018, that person will come to access the site and make recommendations on the next phase for the project," she said.

The Wertmans and Park Manager Renee Campbell had appealed for photos of the estate in its heyday, before the state bulldozed structures on the site in 1962. 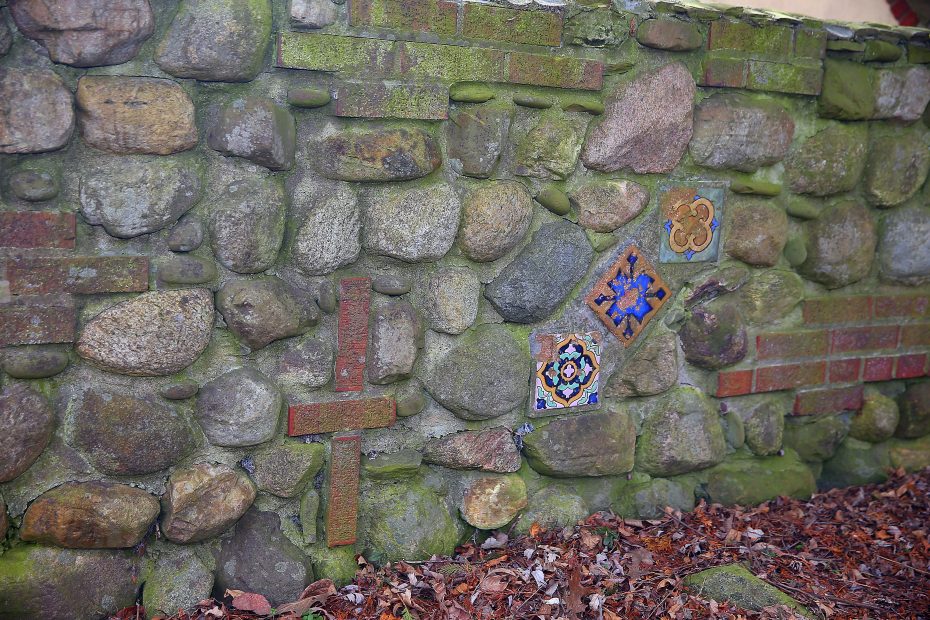 This stone wall is dotted with mosaic tiles and a cross shape in bricks. It is among the many quirky and opulent features at the Twin Locust Lodge site in Golden Hill State Park in Somerset. (John Hickey/Buffalo News file photo)

After the stories were published in the spring of 2017, the Wertmans were able to meet with descendants of the final three owners of the estate -- Harry Parker, who owned it from 1935 to 1945; the Rev. Ralph White, whose Bethesda Tabernacle Church ran a summer camp there from 1945 to 1959, and the Konczakowski family, from whom the state bought the property to add to Golden Hill State Park in 1962.

The Wertmans toured the ruins with descendants and received copies of photos from them, some of which solved the mysteries of foundations and other features they had unearthed.

The couple spent most of the summer mowing and chopping weeds, Cheryl Wertman said. After Thanksgiving they  resumed cutting brush and uncovered five concrete piers, "which we are certain served as part of the foundation to help hold up the dining hall which the White relatives confirm was located at that spot," she said.

In July, Sarah Potwin, a native of Cornwall, Ont., took over as director of the Niagara Falls Public Library. She was soon faced with a challenge from the city budget that cut $92,000 from the library's funding.

Potwin plans to "minimize the cuts in services to our patrons"  while increasing services at the library, a key refuge and resource in a poor city.

In October, Potwin increased hours at the Local History Department, which had been open to the public for just nine hours a week. Since then, all contacts -- visits, emails and phone calls -- have increased substantially, said Local History Librarian Courtney Geerhart,.

Geerhart counted an 86.49 percent increase in use from October to December of 2016 and the same period in 2017. The increased hours, said Potwin, "are taking off and people seem to be loving it. Every time I pop up there, we have visitors conducting research." 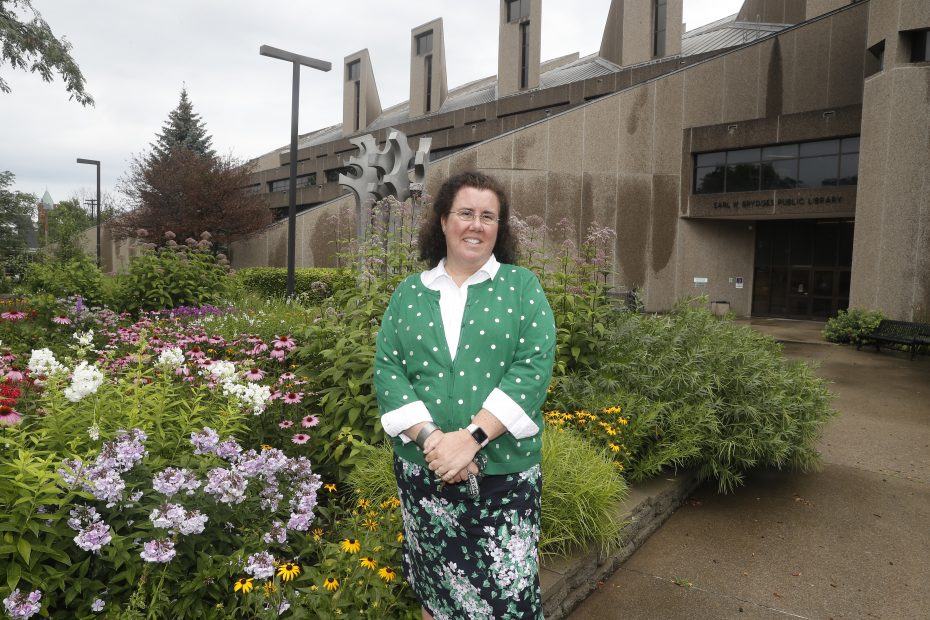 Potwin ticked off some innovations at the library. Staffers are working with the Western New York Literacy Foundation to secure grant money to fund a Literacy Drop in Center at the library. The library hosts a monthly Social Security Administration information day and welcomes state Health Navigators, who help people sign up for medical insurance. VITA volunteers will help people with tax returns starting this month.

Most staff members have been trained by the Department of State to be passport acceptance officers, and the library intends to offer passport services by the beginning of February at the latest, she said.

Food for the body and mind

Singer Farm Naturals, a 35-acre organic farm on Lake Road in Appleton that is known for growing more than 60 varieties of garlic, had a good growing season and harvest, said  Tom Szulist, who has operated the farm with his wife, Vivianne Singer Szulist, since 2007.

"The crop seems to improve each year," said Tom Szulist. "This year, the plant health, especially root structure, dramatically increased. The work we have done with improving the soil bacteria through the use of worm castings has made a difference." 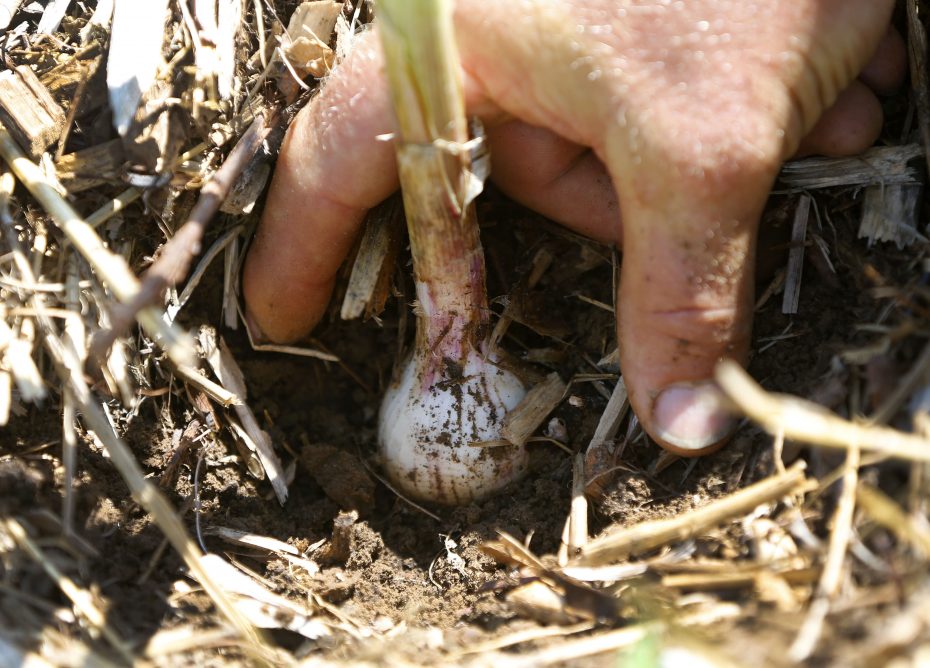 Tom Szulist pushes the soft, fertile soil away from a growing garlic bulb, one of more than 60 varieties of garlic he and his wife, Vivianne, grow at Singer Farm Naturals in Appleton. (Mark Mulville/Buffalo News file photo)

The weather was beneficial for the crop this year, he said, although he did note that "winds are becoming stronger and more often."

The farm's biggest success of the year, he said, was reaching more people "in our community and beyond with our message."

Then he shared a bit of the message: "What nature is teaching us is that the tiny bacteria and fungi in the soil allow plants to express their DNA in the form of amazing and powerfully healing foods."

'Our bacteria are the key to human health," he said. "The research about gut bacteria health and human body health is amazing." The key to health, he said, is "getting the bacterial balance in the body first and then feeding them high-quality food."

So the couple's goal for 2018, he said, "is to grow trillions of bacteria and fungi, some for the soil and some for human consumption. We plan on teaching people in our community about the world they can't see as we continue to explore nature. We are producing fermented foods and teaching classes on how to do it yourself. As a grateful farmer I have learned that what we don't see in our world, micro-organisms, are what give us life itself. Our passion is to learn more and pass it on."

At another business, the Book Corner on Main Street in Niagara Falls, Jeffrey Scott Morrow, who owns the business with his wife, Tereza, reported a good holiday season.

Customers appreciated the store-wrapped books, each with a recognizable hand-tied bow that has been placed on each package since Morrow's father operated the store. Others depended on the Book Corner's home delivery or prompt mailing.

Next year, said Morrow, he hopes to have a kiosk at the Underground Railroad Heritage Center, just a short distance away on Main Street.

Local police continued to use the FBI's Violent Criminal Apprehension Program (ViCAP),  the National Missing and Unidentified Persons System (NamUs) and other resources in both Canada and the United States to try to identify the bodies found in Niagara County, most in Lake Ontario and the Niagara River. 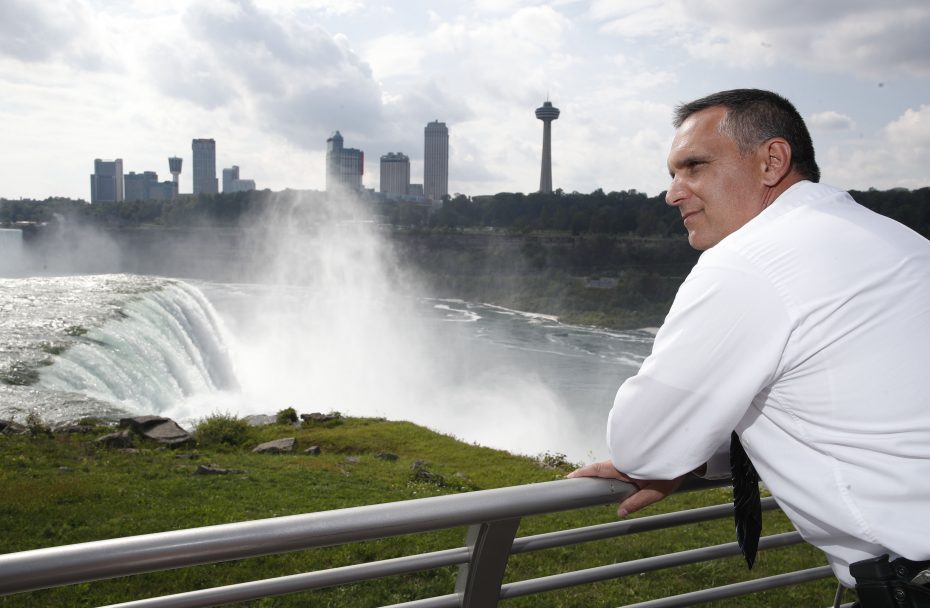 In 2017, the State Park Police helped identify a man whose body was found in the river near Joseph Davis State Park in 1994. Almost 23 years after the man, an Army veteran with mental health challenges, was found, a new FBI fingerprint check identified him.

His mother and sister in Ohio, who had never reported him missing because they believed he was just living in another state, were told of his death. They visited the Falls to see where he had spent his final moments, and walked around the state park with Park Police officers.

The Park Police are still investigating 15 cases opened since 2012 that pose the opposite problem of unidentified bodies. These are missing persons who are believed to have gone into the Niagara River, but whose bodies have not been recovered.

Working with the Ontario Resolve Initiative, Park Police Detective Sgt. Brian Nisbet said, "We resolved one case and are in the process of resolving another. Both cases match up with unidentified remains in Canada. The current case we are resolving involves an unidentified from Toronto."

So, he said, "We are getting some results."

Nisbet said he also spent some time trying to identify a man found by duck hunters on the shore of Fort Niagara State Park in Lewiston two days after Christmas in 2008. The man was estimated to be about 5-foot-5, 128 pounds, older than 50, and had a surgical scar. His dental records and DNA are on file.

On this case, "I have no new leads," Nisbet said. But especially after the long-unknown Ohio man was identified after 23 years, he and others who work on the cases of the unknown and the missing will not give up hope.