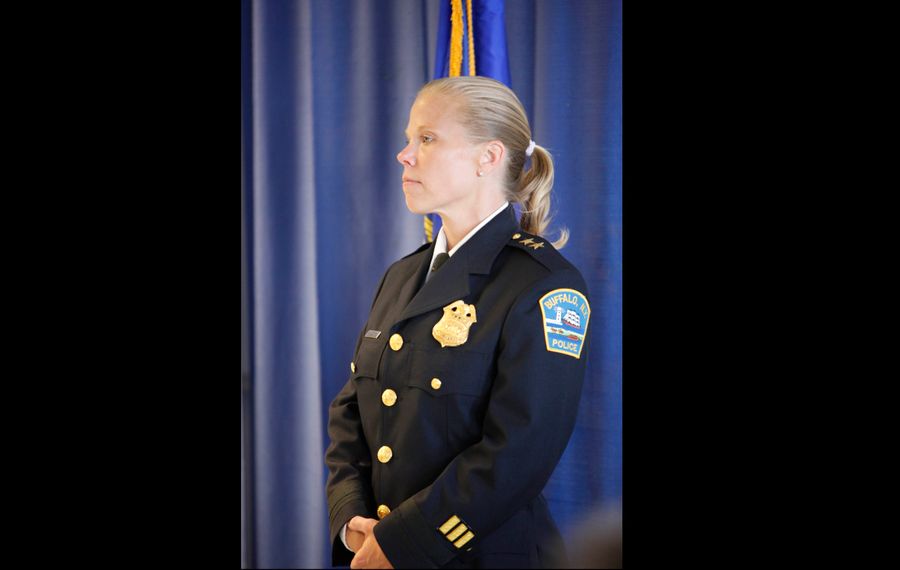 It intrigued her to see the women locking up the bad guys.

"I never thought I could become a police officer being a petite female," said Kubala, who "on a good day" stands 5 feet 3 inches tall.

But she found a spot in the Buffalo Police Department, arrested hundreds of criminals and helped take down a drug ring during her outspoken climb through the ranks.

Now, sidelined by a persistent on-the-job injury, the 46-year-old lieutenant has retired. She says she leaves satisfied, after achieving her dream of working as a police officer.

College opened the door to her career. She said she enrolled in SUNY Buffalo State as a business major on orders "from my mother." But when she took a criminal justice course and heard a guest speaker, she changed her career plan.

"An FBI agent told us police departments were highly recruiting females and minorities. That gave me hope," she said.

Exerting her trademark independent spirit, Kubala informed her mother she was changing her major to criminal justice. Her mother expressed dismay, but Kubala stood firm. In January 1997, she joined the Buffalo Police and was soon on patrol with Officer Laura Starkey. They arrested all kinds of criminals from bank robbers to violent individuals.

"On television, they solve crimes in 45 minutes. In real life, it can take weeks or months," Kubala said.

One of her most interesting investigations happened early in her career. Because of her youthful appearance, she was recruited to work undercover making drug buys from a ring of dealers operating in Black Rock and Riverside.

"I'd go to secondhand clothing stores and buy raggedy looking clothes. When I met with dealers, I'd act strung out," she said. "Dealers would want me to smoke crack cocaine with them. I would just make up an excuse that, 'My man would get upset if I smoked without him.' The dealers bought it."

"I was locked inside a drug house with a confidential informant who started using with the drug dealer. I was scared. They wanted me to use with them. I went to the door and it had like six locks on it and I started saying, 'Listen, man, I gotta go.' "

If she did not exit the house within a set period of time, Kubala explained, a team of detectives would come crashing in. The dealer finally relented and the cavalry was unnecessary. The investigation resulted in 15 convictions, with most of the dealers going to prison.

During her tenure as chief, drug dealers, prostitutes and squatters claimed an empty Sobieski Street house and tore it apart. Police repeatedly raided it, but the illegal inhabitants kept returning.

Kubala wanted it demolished or at least boarded up. When nothing happened, she publicly criticized city housing officials. In time, the house was repaired.

"I know no one was too happy with me about that," she said. "The city hates being called out."

Kubala eventually lost her appointment as a chief and returned to her civil service rank of lieutenant.

When she returned to patrol lieutenant, she was disappointed, yet happy to be back on the streets supervising officers and training the new ones.

But police work also took a physical toll. During her years apprehending suspects, she injured her shoulder several times. She re-injured it last year. The department placed her on light duty and submitted paperwork for a disability pension.

"That could have taken two years, and I decided to retire on a regular pension and free up a lieutenant's position so someone could be promoted," Kubala said.

Next month, she and her husband, Michael Bousquet, begin life as snowbirds in Florida. But, her thoughts will be with Buffalo's finest.

"My whole life was police work, and it just flew by," she said. "My fellow officers were my family. I spent more time with them than my actual family. You depend on them for your livelihood and your safety."