It wasn't the voice of legendary WKBW-TV Irv Weinstein that I will remember most -- even though it was distinctive.

It wasn't the ratings dominance he had for three decades on a team with sportscaster Rick Azar and weatherman Tom Jolls.

It wasn't the tears in his final Channel 7 newscast in 1998 when he thanked viewers for making "all my dreams come true."

It was a smile and a cough I witnessed almost a year ago.

WKBW-TV (Channel 7) anchor Keith Radford, a longtime friend of Weinstein who co-anchored with him for a few years before replacing him in the anchor seat, supplied the perfect quote Tuesday: "We all knew it was coming, but it's still a real shock. I'm just so glad I went out to see him in California when he was diagnosed and we could still talk and joke around. He was an original, never will be another. I was blessed to be close to him."

After Weinstein's death was announced, numerous journalists posted pictures on Facebook that they had taken with him and wrote about how he mentored them or his influence on their decisions to work in the media. It was a poignant display of Weinstein's legacy.

I got a poignant display of Weinstein's courage almost a year ago.

Like Radford, I was glad I visited Irv in his assistance living facility. That's where the smile and the cough come in. The visit was a happy and a sad occasion at the same time.

It was sad because Irv, his family and I knew that he was facing a difficult battle. ALS, which gradually and cruelly robs people of their bodies and voices while keeping the mind intact, is devastating.

But there was Irv in a wheelchair last January with his wife Elaine and daughter Beth Krom at his side. And he was smiling as he we talked about the past, with his once powerful voice laboring to be heard clearly.

It was a happy occasion because Irv made it that way. When I tried to crack some jokes, he began laughing.

It led to some coughing related to his illness, which made me to realize I better not continue trying to be Jerry Seinfeld. Laughter can be the best medicine, except when it hurts too much to laugh. And Irv was practically hurting with every laugh.

The smile and the coughs made me admire Weinstein more than I had even in his days as the king of local TV news in Buffalo who inspired Canadian comedian Mike Myers to invent a drinking game in which players had to take a sip of Molson's every time Weinstein said one of his trademark lines about fires and murders. 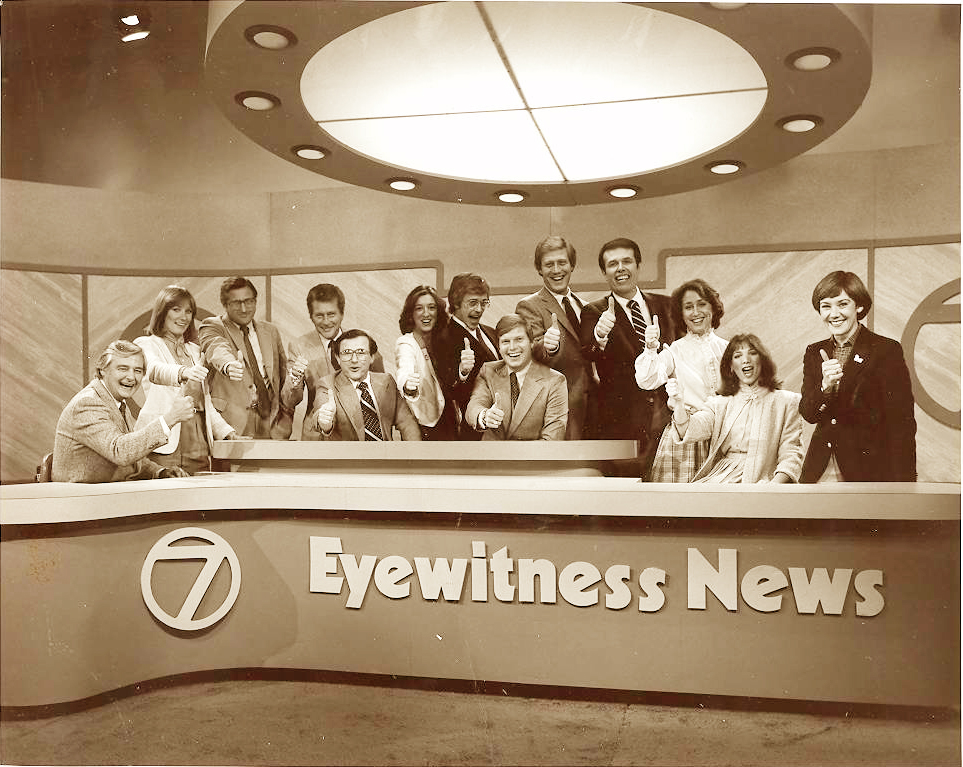 Irv Weinstein, fifth from left, and other members of the Eyewitness News team during the glory days of the early 1980s.

I can't imagine anyone handling the terrible disease with more grace and dignity than Weinstein was handling it while trying to make sure no one felt sorry for him.

His ability to smile and laugh was as impressive -- or even more impressive -- than all of his on-air success. And that is saying something.

It also showed you that the TV Weinstein and the private Weinstein could be different at times.

The same guy who headlined a newscast asking "It's 11 o'clock. Do you know where your children are?" had a playfulness about him that belied the serious journalist he exhibited on television.

John DiSciullo, the former Channel 7 promotions guru who now is at WBBZ-TV, said there was another example of there being two Irvs.

"As strong and tough Irv was in demanding the news presentation be the best that it can be ... he was also a softie!" wrote DiSciullo. "He was very touched by the children and families the Variety Telethon helped. He openly wept on television, not as an act to get people to donate, but because he was truly touched."

I pretty much knew my California visit would be the last time I would see Weinstein or at least the Weinstein I knew who loved to talk about movies as much as he talked about anything.

When he revealed his diagnosis to me months earlier, the film aficionado said his immediate reaction was to think of one of his favorite films, the 1942 classic about Gehrig, "Pride of the Yankees."

A classic line became an example of Weinstein's classic wit.

In my final hour with Irv a year ago, we also reminisced about Western New York food, including one of his proudest achievements: Having the Irv Special on the menu at Chef’s restaurant.

As the hour of laughter with the Weinstein family neared its end, I decided to leave Irv with a laugh by telling one of my late father’s favorite jokes.

Before I could deliver the punch line, Irv beat me to it, smiled and laughed.

I prefer to think of that smile as my lasting memory of Irv because it reminds me of how much he loved life.

I also think one of my favorite lines used by my father applies to Irv. Holding back tears, Radford used practically the same line, too, in his moving tribute to Irv on Tuesday night's Channel 7 telecasts.

If my father were alive today, I'm sure he would say "There was only one Irv Weinstein." And he'd have an Irv Special in his honor – along with several sips of Molson's.