"You're an inspiration," Democratic Minority Leader Thomas Loughran said as he prepared to read a Legislature proclamation in her honor.

Grant has come a long way from her small-town Tennessee roots. She and her husband run a city deli on East Ferry Street. And since 1999, she has been a public figure whose service in city and county government, education and civic activism has garnered her respect from all corners.

Legislators praised Grant's track record of accomplishment and tireless dedication to her constituents. Grant's leadership has also been marked by a quality not all elected officials share — dignity. Grandstanding and political deceit aren't qualities associated with a woman who started out political life by talking with the customers who came through her neighborhood store.

She was always reminded that her power came from the people, she said. As customers shared their troubles, Grant said she found herself doing more and more work to find ways to help them, often connecting them to government services. She eventually entered politics as the campaign manager for Beverly Gray, who was elected as an at-large Common Council member in 1995.

"I didn't do it for financial gain," Grant said of entering politics. "I think I'm more poor now than when I first ran for office."

Wins and a near-miss

After one failed try, Grant won election as the University District representative to the Common Council in 1999, disproving the naysayers who said she didn't have the money or political backing she needed to win.

During her Legislature recognition ceremony, Grant shared how she had been initially discouraged from running for office by people who rattled off her shortcomings, including the assertion that she was an unbacked nobody who spoke with a funny accent.

Looking back, she said, she achieved her political career's best accomplishments during her two terms as a city Council member. She successfully pressed to clean up a toxic waste site and create three Economic Empowerment Zones that drew new businesses along blocks of Bailey Avenue, Kensington Avenue and Main Street, she said.

After she lost her re-election bid to the council, Grant joined the Buffalo School Board in 2004. She won election to the Legislature in 2007 and was re-elected to her seat four times. She was unanimously named chairwoman in 2012, a position she held until the Republican-supported majority took over in 2015.

She shocked political observers by almost beating heavily-favored Tim Kennedy for a New York State Senate seat in 2012. She lost the Democratic primary by only 139 votes despite being outspent by hundreds of thousands of dollars.

The key to her near victory was staying closely connected with the people she was elected to represent and deliberately running an under-the-radar campaign, she said.

She waged a Democratic primary campaign this year for mayor. She knew that was a long shot. But she still hoped.

Even though she lost, she likes to think the points she made during the campaign — particularly about the need for greater city investment in the East Side — plays a role in the East Side initiatives pursued by Mayor Byron Brown since his re-election. Grant acknowledged that she and Mayor Brown have grown apart over the years, but said she thinks they've come to a good understanding.

Grant has undergone a hip replacement and two knee replacement surgeries the past two years. She said she's recovered well and is not leaving elected office at age 67 for health reasons.

"Sometimes, you have to recognize you have done all you can do in a position, and it's time for someone else to hold the position," she said. 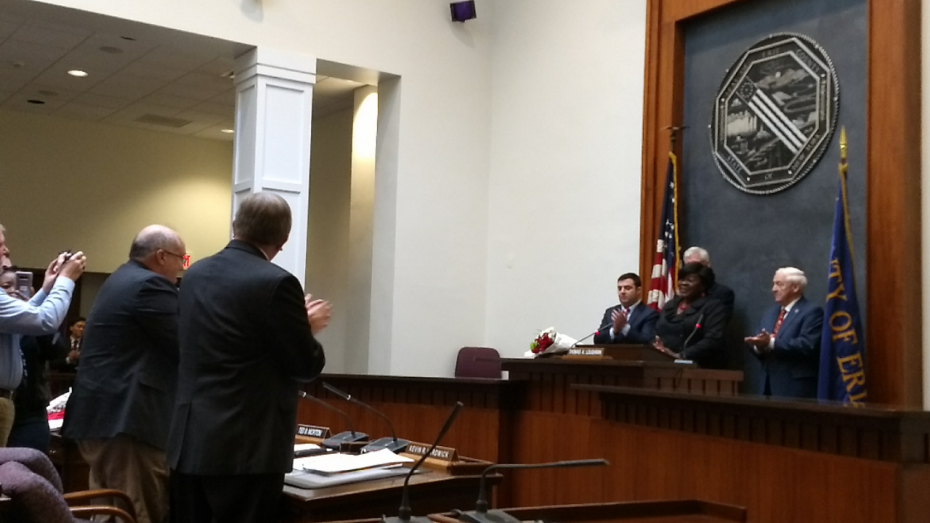 But Grant is not entirely retiring from public life.

Grant's community activism outside of elected office has always been important and will remain so, she said. Grant founded the We Are Women Warriors community empowerment group and remains active in numerous community organizations.

Also, Grant remains two years shy of having 20 years in the New York State pension system. She has been offered a job at the Board of Elections so that she can reach that milestone. Board of Elections Commissioner Jeremy Zellner, who also heads the Erie County Democratic Party, confirmed Friday that she will be given a part-time position.

Zellner said Grant's work will revolve around community outreach to voters, voter registration and bolstering the number of local election inspectors. He also said the job offer was not part of any orchestrated attempt to encourage her to leave office.

"She's got particular expertise in the community being a leader, and we need someone to focus on engaging the community," he said. "It's hard to find someone of her caliber, who is so entrenched in the community. People need to be involved in this democracy if it's going to work, and I can't think of a better person than Betty Jean Grant to make that happen."

As part of Legislature proclamation honoring Grant, which was read in turns by Chairman John Mills, Lorigo and Loughran, Grant was lauded for championing city issues while still maintaining "her trademark smile and good nature."

"She's a hard-working lady," Mills said. "I really respect her. She's loved in her district, too. She's just a nice person."

Grant said the one thing she takes away from her time as an elected leader is the same belief she entered office with: Power comes from the people you serve. The best way to shake off the corrupting influence of power is to remember that, she said.

She added, "I remain loyal to the people who elected me, and I remain committed to making sure their needs are met."