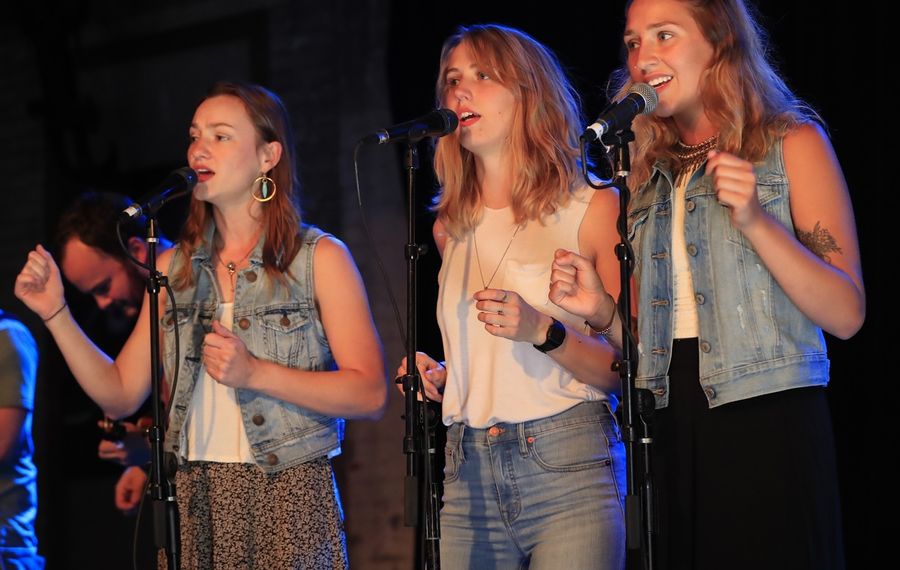 One of the standout acts from the inaugural run of Cobblestone Live was Upstate Rubdown, a harmony-rich Americana act from the Hudson Valley area.

Armed with a trio of powerhouse singers that sound like if Dirty Projectors went full measure folk, the act took the stage to deliver a modestly attended mid-day set. Song after song, though, saw the room quickly fill up as the weaving vocals made their way on to Illinois St. By the time the seven piece band finished final song, Iron Works was packed to the brim and begging for more.

Fast forward to today and the road-friendly outfit is set to make a much welcomed return to Buffalo with another performance at the Cobblestone venue to cap off its successful year.

The band currently only has one album to its name, 2015's "A Remedy," but a quick internet search will find a collection of sessions and live clips that truly showcase the special something, an infectious mix of gospel, bluegrass, soul, pop and jazz, that Upstate Rubdown possesses.

Rochester-based folk group A Girl Named Genny will be opening the show. The new-to-the-scene act released its self-titled debut EP last April; a proper full-length is set to be shared next spring.

Normally I try to stay as far away from jam music as possible, but Aqueous has an intriguing trick up its sleeve for its New Years Eve gig at the Theatre District music venue.

The groove rock unit will be performing two sets. The first, for those so inclined, will be collection of Aqueous originals, tracks that the band has long road tested while seeing its profile continue to climb.

Part two, however, is where things get pretty interesting as the four-piece will perform a tribute set to Gorillaz, the cartoon, genre-torching side project of Blur front man Damon Albarn and artist Jamie Hewlett.

Albarn and crew released its latest album, the 26 track, guest-heavy "Humanz," back in April, so expect the Aqueous guys to have a number of hits and deep cuts at its disposal from an influential catalog that stretches all of the way back to 2001.

Getting the night going will experimental rock unit Lazlo Hollyfeld. The long-running group will be putting a cap on its fantastic fall run after selling out Mohawk Place with its Halloween weekend Arcade Fire tribute and turning the normally laid back Bidwell Parkway bar McGarret's into lively, all-nighter with its annual Talking Heads Thanksgiving Eve show.

A pair of night long dance parties will force you into a pretty tough decision on New Year's Eve.

Outside of its signature Cure vs. Smiths throw down, the Transmission crew tends to go all out for its annual NYE bash as its events become more and more rare as the years go by.

From post-punk artists like Joy Division and the Stone Roses to more modern acts including Daft Punk and Le Tigre, expect DJs Bill Page and Jason Draper to mine nearly four decades of indie dance music to usher in 2018.

Back over in Allentown, the Transmission-indebted series Dance Yrself Clean will be helping the rowdy back room ring in the new year.

After getting its feet wet for about a year over at Milkie's on Elmwood, with a quick detour to Marble & Rye along the way, the young dance party seems to have settled in quite nicely on Allen Street as of late.

If it's your first DYC party, expect cuts from acts like LCD Soundsystem, Jamie xx., Grimes, Hot Chip and many more.