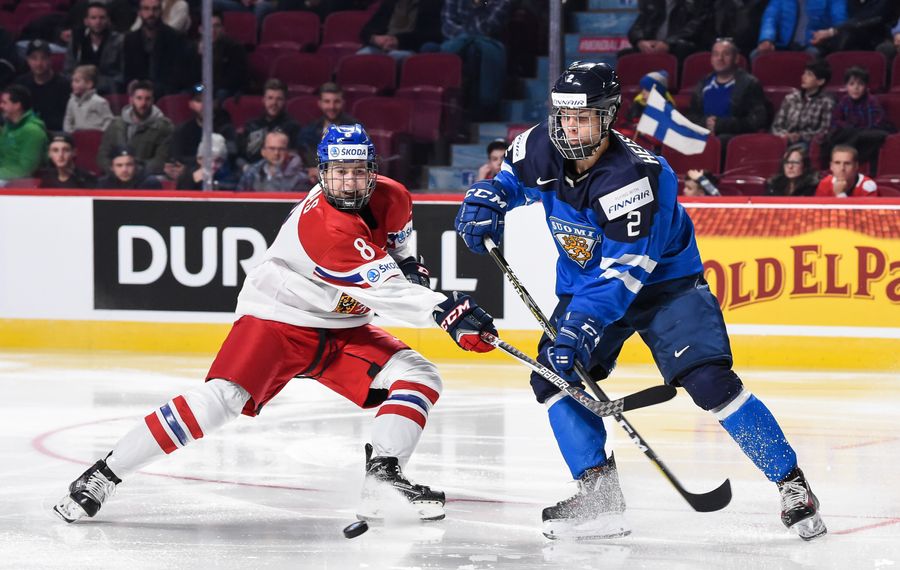 World Juniors history: Canada is the winningest country in World Juniors history with 30 medals. Canada has 16 golds, nine silvers, and five bronze. Last year's silver medal was a sting as Canada lost to the U.S., 5-4, in a shootout on home soil. Canada's last gold was in 2015.

Key players: Canada returns seven players from last year's silver medal team, including Jake Bean, potentially the best defenseman at the tournament. He was the 13th overall selection of the Carolina Hurricanes in 2016 and has a penchant for scoring with 27 points in 25 games (five goals, 22 assists) for the Calgary Hitmen of the Western Hockey League this year. Bean will lead a strong blueline for Canada along with returning defensemen Kale Clague and Dante Fabbro. All three have the ability to create offense from the blue line.

Clague was a second round pick of the L.A. Kings in 2016 and is an alternate captain for the Brandon Wheat Kings of the Western Hockey League with 47 points in 28 games (10 goals, 37 assists).

Fabbro was picked 17th overall by the Nashville Predators in 2016. In his sophomore season at Boston University he has 12 points (four goals, eight assists) in 18 games.

Carter Hart looks to get the nod in goal for Canada. He played in four games at last year's tournament, including the shootout loss in the gold medal game.

What to expect: Canada is not a favorite to win the gold, but there's certainly motivation after last year's loss to the U.S. in Toronto. They will certainly be in the medal round and their goaltending and blue line could propel them back into the winner's circle.

World Juniors history: This will be the fourth straight appearance for Denmark in the World Juniors after two years playing in Division I. Since 2001, Denmark has been in the World Juniors just five times (this year marks the sixth appearance). Last year was their best finish, fifth overall. They advanced to the quarterfinals where they were shutout by Russia, 4-0.

Key players: There are some forwards with skill and size on the roster. Nikolaj Krag-Christensen is playing his third and final World Juniors for Denmark giving him plenty of experience on his 6-3, 201-pound frame. A seventh-round (209th overall) pick by the St. Louis Blues in 2016, he had two goals and five assists for Denmark at last year's tournament.

Joachim Blichfeld went right behind Krag-Christensen in the 2016 draft – 210th overall in the seventh round to the San Jose Sharks. The 6-2 winger is in his third season of North American hockey with the Portland Winterhawks of the Western Hockey League. This season he has 30 points in 26 games (13 goals, 17 assists). He had three goals and one assist for Denmark at last year's World Juniors.

Denmark returns defenseman Oliver Joakim-Larsen, who turns 19 on Christmas Day. He is a steady blueline force and had one assist in last year's tournament. Also watch for Malte Setkov on the blueline. The 6-6 defender was a fourth-round pick (100th overall) by the Detroit Red Wings in 2017.

What to expect: Denmark doesn’t have the history, but it does have recent success. There are some interesting players and the Danes certainly have tons of size which could make them a difficult matchup. Maybe not a medal, but Denmark could give other teams fits.

World Junior Championship: Everything you need to know

World Juniors history: After winning gold in 2016, Finland had a disastrous 2017, ending up in the relegation game against Latvia. Wins of 2-1 and 4-1 over Latvia win kept them from being sent down. Finland also won gold in 2014 and overall has  14 medals – four gold, four silver, six bronze.

Key players: Buffalo Sabres goalie prospect Ukko-Pekka Luukkonen will compete for time in net. He played last year for Finland's U18 team with a 3.63 goals against average and an .890 save percentage in 13 international appearances. Playing this season in the second-tier Finnish league, he has a 2.82 goals against average and a .914 save percentage in 17 games.

Janne Kuokkanen can provide plenty of offense. A second-round pick of the Carolina Hurricanes in 2015, he had 62 points in 60 games last season for the London Knights in the OHL. He has four NHL games with the Hurricanes this season with three goals and nine assists in 16 games for their AHL affiliate in Charlotte.

Also returning is Eeli Tolvanen, Nashville's first-round pick in 2017. Last year he scored 30 goals with 54 points in 52 games for the Sioux City Musketeers in the OHL. This year he plays in the KHL, leading Jokerit with 17 goals and 14 assists in 38 games.

On the blue line will be Miro Heiskanen, the third overall pick at the 2017 draft by Dallas. Playing in Finland's top league, he has nine goals and four assists this season.

What to expect: The gold is a slim chance, but Finland has an opportunity to contend for a medal. If nothing else, they will be motivated to erase the bad taste of playing in last year's regulation-round.

Mike Harrington: As we learned seven years ago at World Juniors, get ready for a wild time

World Juniors history: There is not an illustrious history for Slovakia at the World Juniors but the country does have two bronze medals to its name, finishing in third place in 1999 and 2015. Last year, Slovakia lost to Sweden, 8-3, in the quarterfinals and placed eighth overall.

Key players: Goaltender David Hrenak is putting together a heck of a freshman season for St. Cloud State. The 19-year-old has a 5-1-0 record, as the Huskies backup goaltender. St. Cloud went into the semester break as the top-ranked team in Division I college hockey. Hrenak has a 1.82 goals against average and a .947 save percentage in his six games. Expect him to be the starting goalie for Slovakia.

Among the players in front of him will be Martin Bodak. The 19-year-old defenseman is playing his first season of North American hockey with the Kootenay Ice of the Western Hockey League. In 30 games for the Ice he has one goal and 11 assists. Bodak was on the Slovakian World Juniors team last year notching one goal in five games.

Forward Adam Ruzicka is likely the team's best offensive threat. The 18-year old was a fourth-round pick (109th overall) of the Calgary Flames in 2017. In his second season with the Sarnia Sting of the Ontario Hockey League he has 39 points in 34 games with 20 goals and 19 assists. He also is returning from last year's World Juniors team where he had a goal in five games.

What to expect: It's not looking like a medal-round year but if there's a dark horse in Group A, it's probably Slovakia. Offense may be the team's weaker link, but defense and goaltending look to be solid. Expect them to finish higher than last year's eight-place finish.

World Juniors: Previewing the teams in Group B

World Juniors history: The defending gold medalist, the U.S. won last year with a 5-4 shootout win over Canada. It was the fourth gold medal for the U.S. at the event. They have 10 overall medals with one silver and five bronze.

Key players: Seven players return from last year's gold medal team, led by forward and team captain Joey Anderson. Anderson is dynamic and can play in all situations for Team USA. Watch for him to be a leader for the U.S. both in his play and in rallying the team as needed.

Of key interest to Buffalo fans is forward Casey Mittelstadt, chosen eighth overall by the Sabres in the 2017 entry draft. Having one of the best freshman seasons in college hockey for the University of Minnesota, Mittelstadt figures to play a prominent role in Team USA's offense.

The U.S. lineup is stacked with talent. Other players to keep an eye on included forward Brady Tkachuk. The freshman at Boston University is draft eligible in 2018. Forward Max Jones (first round by Anaheim in 2016) should play a key role as well.

What to expect: The U.S. is deep and poised for a return run to gold. It won't be easy. No gold medal ever is. But the U.S. should challenge for a medal and has an excellent chance of being the first country to repeat since Canada won five straight golds from 2005-09.