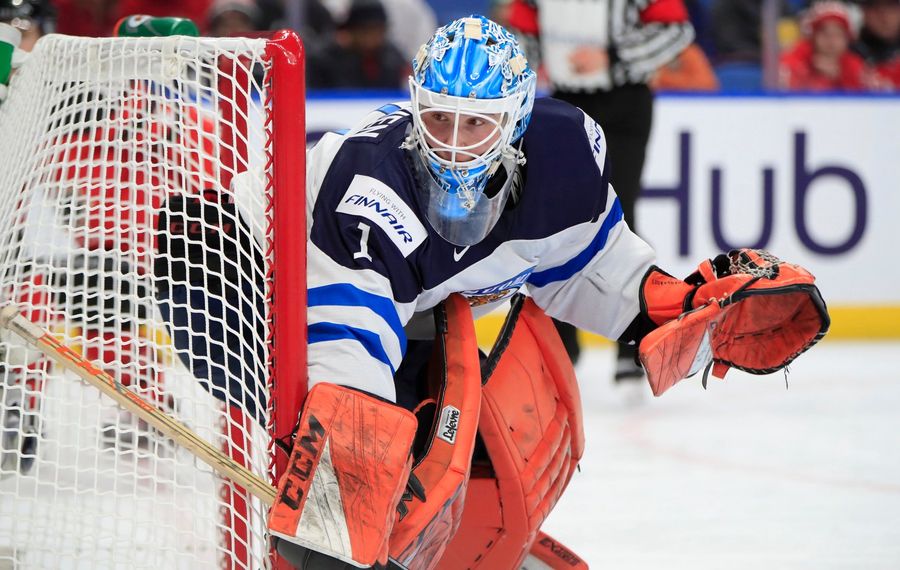 It was an uneven start to the World Junior Championship for Ukko-Pekka Luukkonen.

Finland's No. 1 goaltender  is thrilled to be back in Buffalo, where  he impressed fans at development camp in July after the Sabres drafted him in the second round in June in Chicago.  Wearing his trademark orange gloves and pads we saw over  the summer, he would have liked  to have put on  a better showing  in  Canada's 4-2 win Tuesday in KeyBank  Center.

There wasn't much Luukkonen could do on any of Canada's three first-period goals. The 18-year-old was crashed into by Boris Katchouk on a controversial breakaway on the first tally that was upheld by video review and gave up tap-ins to Sam Steel and Drake Batherson.

Replays clearly showed Katchouk knocking the net off its mooring before the puck sneaked  over the goal  line but the play was called  a goal  on the ice  and stood on review.

UPL on Canada's disputed goal: "It was different but I can't complain about it. Juries and referees make the decisions and everybody makes mistakes. That's hockey. There's contact. Referees make their decisions." #Sabres #WorldJuniors pic.twitter.com/DiDdyJOUin

The lone iffy goal he gave up was by Taylor Raddysh with  7:13 left  in the second period and Canada clinging to a 3-2 lead.  It was  an unscreened  laser from about 40 feet out that appeared to dip under his blocker.

"Maybe there was a little bit of dipping there," he said. "Maybe.  But that's why there's a goalie. I
have to save it."

Luukkonen has a 2.78 goals-against average and  .914 save percentage this season  for Leki in the  second tier of  Finnish hockey. He said he's feeling  no  added  pressure  to play in what could  be his future professional home.

"It's a big thing to be here in Buffalo to play for Finland," he said.  "The start tonight wasn't the best but you have to move forward. The Sabres have kept an eye on me for the whole year. It's no different for me with that. It's just great to play here for the fans of the Buffalo team."

Defenseman Dante Fabbro was in the lineup for Canada after being cleared to play Tuesday morning. Fabbro, a first-round pick of the Nashville Predators in 2016 and one of seven returning players for  Canada, suffered a lower-body injury during a selection camp game. He returned to skating with the team on Saturday.

That meant Canada released Joshua Mahura on Tuesday. Mahura, a 2016 third-round pick of the Anaheim Ducks, was one of Canada's final cuts when the team named its roster on Dec. 15. He was recalled two days later when Fabbro's status was unclear.

Mahura, 19, was returned to the Regina Pats in the Western Hockey League where he has 29 points (11 goals) in 28 games.

"Josh was incredible through the entire process," said Shawn Bullock, Canada's senior manager of hockey operations. "It was a difficult situation, but he is a team player, was professional through it all, and was committed to the team on and off the ice since his return."

Switzerland and Slovakia will make their debuts at this year's tournament in the only two games on Wednesday's schedule. Switzerland plays Belarus at 3 p.m. and Slovakia plays Canada at 7 p.m. Both games are in KeyBank Center.

The Swiss gave the U.S. a strong game in last year's quarterfinal round. They won the bronze in 1998 but haven't placed higher than fourth since then.