About 550 miles separate the crime-ridden streets of Englewood in southside Chicago, where Jalin Cooper was born, from the YMCA in Medina, where Cooper ascended from a homeless, uncoordinated boy to a beloved local superstar.

Tucked conveniently just a few blocks from downtown Medina, right past the family-owned Rudy’s diner, is the YMCA. Covered in famous, local sandstone, with castle-like towers and big oak doors, it looks more like a building designed for medieval war than the place you'd go for early-morning water aerobics.

Well, it sort of was designed for war.

Long before it was a place where budding basketball players like Cooper could put up shots and clear their heads, the building was a U.S. Armory for the National Guard and was commissioned in World War II.

The government closed the armory in 1977 and it sat empty for quite some time before the community came together to save the historic building and repurpose it for other use.

And years later, the YMCA has been a home away from home for many locals, including Cooper, who would dribble down village sidewalks to the Y when home life forced him to grow up sooner than most kids his age.

It's why basketball always will have a special place in his heart.

But soon enough, Cooper’s basketball career will come to an end. He has one last hurrah with the Mustangs before he heads off to Toledo on a football scholarship.

“It’s going to be sad when it’s over because basketball was my first love,” said Cooper, whose family moved to Medina from Chicago when he was in sixth grade. “Basketball is what I wanted to play in college. That’s what I would do to clear my head when a bunch of stuff was going on throughout my house. I fell in love with it from that point on.

"Right now, I'm just trying to enjoy this joyride of my last year," he said.

Basketball has always been Cooper’s release from a complicated childhood. His way of escaping the fact that his family home in Medina burned down. His way of forgetting that his biological father, Roscoe Chambers, is serving a 30-year prison sentence on federal drug charges.

Basketball is also the reason he met the Hellwigs.

Eric Hellwig, now Jalin’s legal guardian, met him when Jalin was playing junior varsity basketball. Hellwig, the JV coach, kept seventh-grade Cooper on the team as a favor to varsity coach Tom Forrestel, who made a connection with him in the middle school and wanted him to stick around no matter how raw he was as a player.

“He wasn’t a polished player by any means – he had a lot to learn,” Hellwig said. “But he was a hard worker, he was a great kid you never had to worry about.”

The following year, Hellwig’s son Jason, Jalin’s friend and quarterback, asked his parents if Jalin could start living with the Hellwigs after his family decided to nearby Lockport.

“When he came in, he was immediately family,” Eric Hellwig said.

And once Cooper developed his basketball skills, he was battling with Jason and Jason's brother Adam, on the family hoop in the driveway.

“There were a couple of times where there were some tears shed and some foul language being tossed around,” Eric Hellwig joked.”That’s the case with any brothers – and that’s exactly what these three are.”

The Hellwigs treated Jalin like their third son and afforded him all the same opportunities and financial support that Adam and Jason received.

So off Cooper went to area basketball camps and clinics, and eventually, playing on an AAU basketball team with players such as Health Sciences' Davonte Gaines, who has verbally committed to Tennessee, and Jeenathan Williams, a four-star recruit from Rochester headed to the University at Buffalo.

It was at those high-level AAU tournaments that Cooper realized that while he was a good basketball player, he was just another fish in a big pond.

“It got time for me to start facing reality,” Cooper said. “There are a bunch of 6-4 guards out there, but being a 6-4 receiver is special. That kind of jump-started me to start looking at football more.” 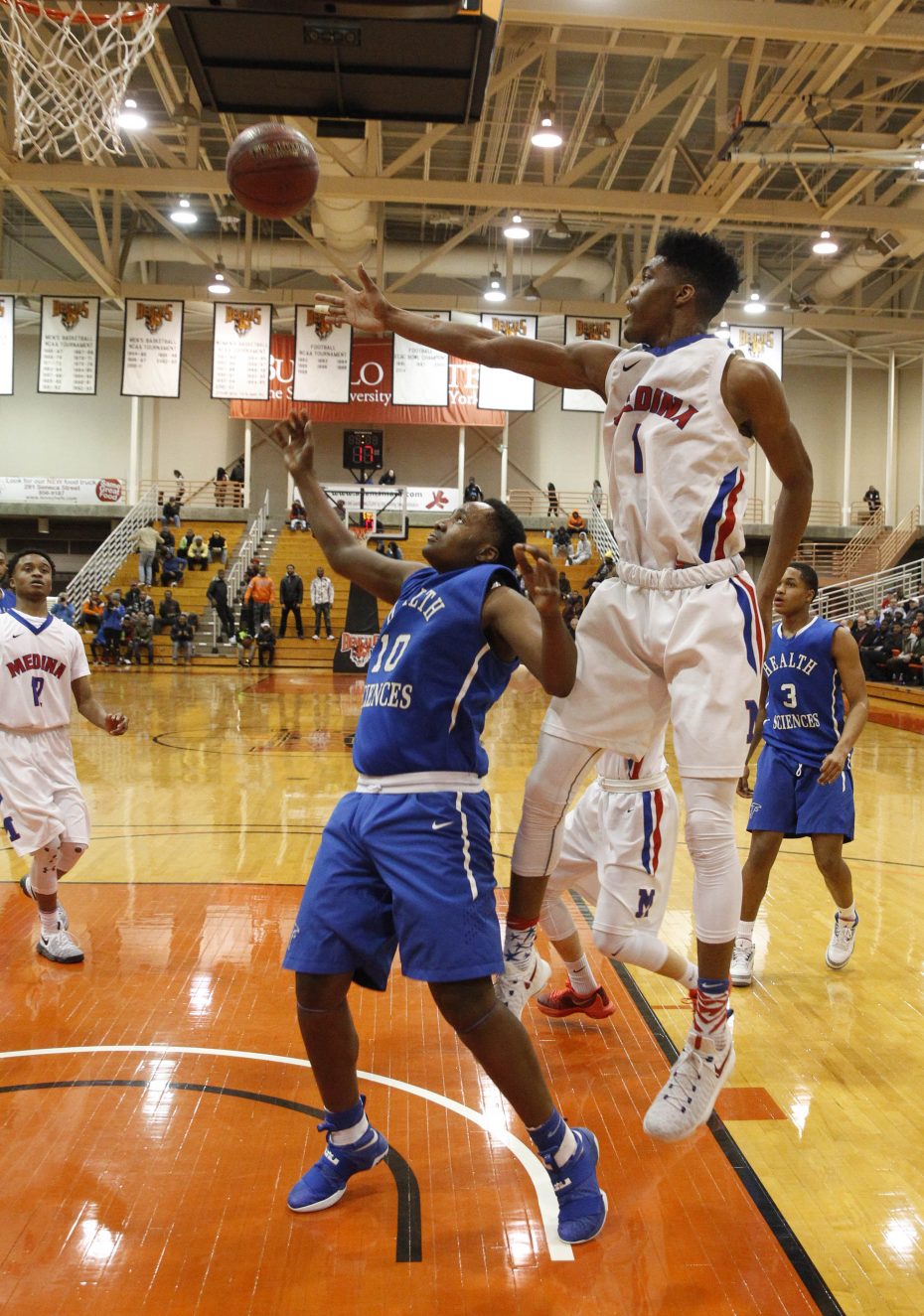 Jalin Cooper of Medina goes up for a shot during game action in the Boys Class B-2 semifinal between Medina and Health Sciences at Buffalo State College, Thursday, March 2, 2017. Defending is Shakir Ellington-Cook of Health Sciences. (Sharon Cantillon/Buffalo News)

He didn’t have to do much digging – colleges came to him.

UB, Syracuse, Washington State and Rutgers were among the 11 schools to offer Cooper a football scholarship before he ended up picking Toledo, which ranked among the highest-scoring teams in the nation this season.

Late in the recruiting process, UB offered Cooper a football scholarship and a spot on the basketball team as a walk-on, but Cooper had his mind set on Toledo.

He officially signed his letter of intent during the new early signing period.

To make sure that he can watch Cooper play at Toledo and Jason play at Brockport, Eric Hellwig has decided to step down from coaching at Medina this year after 28 years of working with multiple sports in the district, including football, basketball and baseball.

"I'm going to miss it, but the opportunity to watch my sons play in college won't last for very long and want to take full advantage of it," Hellwig said.

For now, Hellwig is soaking up watching Cooper in basketball as he gets back to 100 percent. Cooper is still recovering from knee surgery that he had after tearing his meniscus at the end of the football season. He hasn’t missed any games, but he’s still recovering and his minutes have been limited because of it.

The injury has thrown an added wrinkle into Cooper’s chase of Medina’s all-time scoring record held by Levi Pace, who played at Utah State for a short time and then at Brockport. Cooper entered this season with 915 points, 365 away from Pace’s record of 1,280.

“It really depends on how explosive he is when he gets back to 100 percent,” Forrestel said of on Cooper’s chance at the record. “I’m hoping that his knee responds as quickly as possible with the current therapy that he’s been doing. I want him to have a great senior and want us to have a great year through him.”

For Cooper, the record is second – he’s mainly focused on leading a fairly young team to a third consecutive divisional title and eventually over the hump at the Section VI championships at Buffalo State.

He certainly has some work to do.

Medina lost two players to transfer, including 6-foot-3 Johnny Salone, who was a first team Niagara-Orleans selection last season. Two freshmen have been forced into action.

Forrestel calls Cooper’s leadership “one of his biggest strengths” and having him around to nature a young team is “as good as it gets.”

“It’s innate in him – he loves to help people and I think that comes from being helped,” Forrestel said. “It’s crystal clear in his mind what this community has done for him and that motivates him to kind of pay that forward.”

In Forrestel's 18 years of coaching varsity, it’s fair to say one of his best decisions was asking Coach Hellwig to simply do him a favor.

“To watch it come to a head, it’s special,” Forrestel said. “Jalin’s a special player, he’s a special person, it’s a special situation. Of course, it’s bittersweet – filling his shoes will be nearly impossible.”