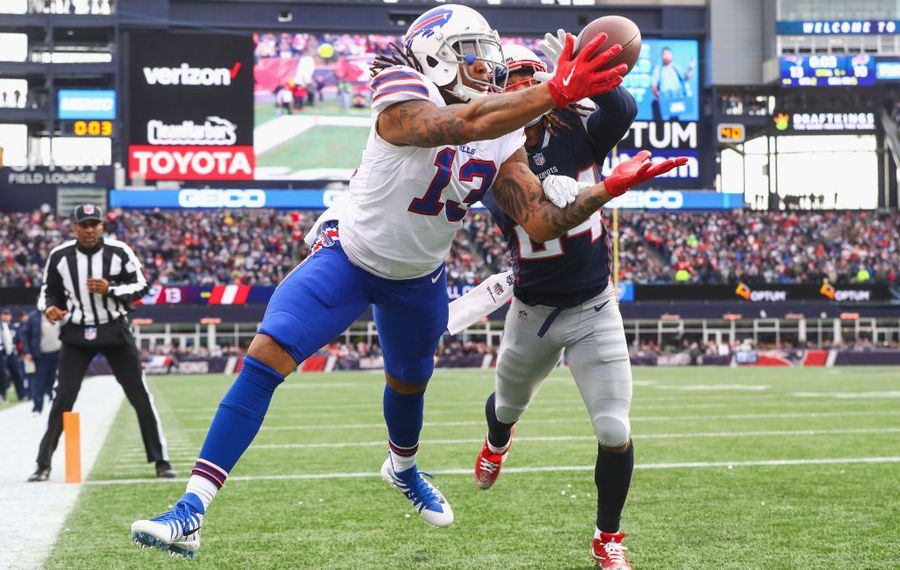 You could practically hear fans screaming across Western New York when the call on the field was reversed Sunday, growing louder in defeat and regaining momentum while families huddled around their Christmas trees. Kelvin Benjamin should have been awarded a touchdown Sunday against the Patriots.

The Bills did what they do against the Patriots — lose — and their fans did what they do when replay goes against Buffalo — whine. It included Bills co-owner Terry Pegula, who railed on the radio Monday about replay while ignoring the number of times his team fell apart this season and again Sunday.

Sure enough, incessant complaining about flying pellets and possession morphed into discussions about the NFL favoring the Patriots and conspiring against everyone else, in this case the Bills.

Here's a little question: While fans cried over officiating, how many also mentioned Charles Clay? On the previous play, the tight end dropped a 6-yard touchdown pass that Santa Claus could have caught with his eyes closed. It was conveniently lost in the hysteria over Benjamin getting a bum deal.

Indeed, it was a terrible call. No argument here.

Let's not forget Sean McDermott sending kicker Stephen Hauschka onto the field for a 50-yard attempt on fourth-and-1 from the New England 32-yard line. Never mind that Hauschka has been terrific all season from long distance and had already kicked three field goals in the game.

The Bills should have gone for the touchdown because that's how you beat the Patriots. Buffalo needed a measly yard to extend the drive. Run the ball. The Patriots were 29th in yards allowed but sixth in points allowed. Even if the Bills made the first down, a TD was hardly guaranteed.

At the time, McDermott hoped to draw within, 23-19, with 13:13 remaining in the fourth quarter, enough time to score a touchdown and possibly take the lead. His plan evaporated when Hauschka missed the kick. The Patriots marched down the field, grabbed a 30-16 lead and never looked back.

Bills owner Terry Pegula: 'We have to fix' replay in the NFL

It was a poor decision. No argument here.

If you want to take out your frustration on the officials or the fact that McDermott made a few missteps this season — such as the decision to start Nathan Peterman against the Chargers, as if they would have won with Tyrod Taylor — feel free. Just know that playoff teams persevere while others do not.

You usually can't fool Buffalo fans, so it's sad when they start kidding themselves. Too many make excuses and apologize for their teams' shortcomings, rationalizing that some external force was the cause of the Bills or Sabres' demise when, really, the answer is right in front of them.

Eighteen years later, people are still moaning about No Goal. If the Sabres played better in regulation, if they capitalized on numerous scoring chances, if Dominik Hasek didn't allow a soft goal early, Game Six against the Stars never would have been placed in the hands of the officials. Brett Hull's left skate is a non-issue.

The Bills have nobody to blame but themselves for their current predicament — needing a win Sunday and help from other teams to reach the playoffs — for the simplest of reasons: They didn't play well enough through the first 15 games this season to secure their own spot.

McDermott is certain to face criticism if the Bills A) fail to beat the Dolphins or B) they win in Miami but don't get the help needed from other teams. McDermott is the head coach. He made mistakes during his rookie year. He's ultimately responsible. He even takes ownership in the 17-year playoff drought.

However, the Bills could have been worse, much worse, if McDermott wasn't coaching. He's a major upgrade over Rex Ryan, a phony who never should have been hired by the Bills. Most predicted the Bills would win six games or fewer under McDermott. I had them finishing 5-11. They're 8-7.

In my book, they overachieved. You could revisit numerous individual plays and various stretches of the season that contributed to the Bills' record going into the regular-season finale against Miami. If you looked hard enough, you wonder why they aren't 10-5. Just as easily, they could be 5-10.

Taylor failed to connect with an open Zay Jones late in the game in a 9-3 loss to Carolina. Buffalo failed to capitalize on a 40-yard punt return against Cincinnati, failing to score from the 12-yard line and settling for a field goal in a game the Bills lost by four points.

The Bills gave up 81 points and allowed 492 yards rushing in blowout losses to the Jets and Saints before McDermott took a flier on Peterman against the Chargers. Buffalo was tied with New England at halftime before allowing 133 yards rushing while getting outscored, 24-3, in the final two quarters Sunday.

Fans forget how poor officiating benefited the Bills, too. Tre'Davious White scooped up an incomplete pass that was ruled a fumble before running for a touchdown in a 23-16 win over Atlanta. The Bills extended a drive late in a 26-16 win over Denver after Von Miller was called for a bogus unsportsmanlike conduct penalty.

Buffalo had a borderline offensive-interference on a two-point conversion by Indianapolis before winning in overtime in the snow. McDermott made a dubious decision to punt late in overtime. The penalty against the Colts was quickly forgotten and McDermott's decision was quickly forgiven in victory.

It's funny how that works.

If the Bills fail to make the playoffs, it's not going to be because the officials conspired against them or their coach made a poor decision Sunday. It will be for the same reasons people suspected before the season began. They had mediocre quarterback play, an inconsistent run defense and a lack of talent and depth at receiver.

Let's not overthink what happened this season. Ultimately, teams miss the playoffs because they weren't good enough for one reason or another. People need to stop blaming the officials, stop making excuses and take an honest look at their teams. Almost always it end begins and ends with players.