“MERRIE CHRISTMAS,” read one of the headlines across the top of The Buffalo Evening News on Dec. 24, 1881, in one of the first years of the newspaper’s publication.

“The Christmas festival will cover two days this year,” the text under the headline reads. “The legal holiday to be observed by the banks, public offices and probably by most business houses, will not occur till Monday, but Christmas day proper, falling on Sunday, will be celebrated with more than usual spirit and display of greenery and fine music. All the ritual churches have made elaborate preparations, and in several of them the decorations are extremely rich and beautiful.”

That was the News’ second Christmas – the newspaper began publishing Oct. 11, 1880. In both of those first years, the News did not publish an edition on Christmas Day, according to a survey of the newspaper’s archives this week.

Many things have changed since then, including the newspaper’s price: a copy of the News in those days sold for 1 cent.

A negative image of the Christmas Eve edition from 1880 shows the newspaper commemorating the holiday with a religious tone not commonly seen in present-day news copy: 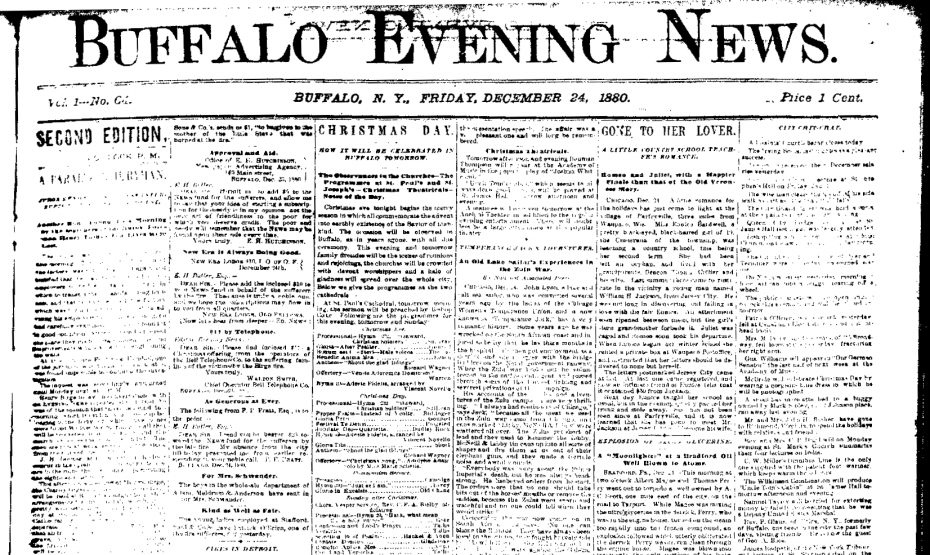 Christmas eve tonight begins the merry season in which all commemorate the advent into earthly existence of the Savior of mankind. The occasion will be observed in Buffalo, as in years agone [sic], with all due ceremony. This evening and tomorrow family firesides will be the scenes of reunions and rejoicings, the churches will be crowded with devout worshippers [sic] and a halo of gladness will spread over the whole city.

The archives provide an interesting glimpse into the presentation of news in the 19th century. One Christmas-themed item from the 1881 edition was headlined “Not a Merry Christmas for Him”:

About noon today as Foreman Rath, of W.H. Glenny’s warehouse on Pearl street, was preparing a crate of crockery to be lowered into the cellar from the first floor, he lost his footing and fell headlong into the basement. He struck the floor with great violence. The crate fell with him but struck the floor, rebounding and dropping upon Mr. Rath. When he was picked up he was in great pain, and it is feared his leg is broken and that he is injured internally.

The next sentence is the article’s last: “He was sent to the hospital.”

Another item from 1881 was topped by an all-caps headline that screamed, “FLANIGAN’S CHRISTMAS: HOW THE CONDEMNED MAN SPENT THE JOYOUS HOLIDAY: Lonely and Gloomy in the Prospect of Death – Orrin Thomas Carves for the Festive Prisoners at the Jail and Does it Like an Expert”:

The Christmas dinner, with the fat turkey, or the lean turkey, or the large chicken, goose, duck, or other fowl, which the law-abiding citizen enjoyed yesterday with the usual accessories was perhaps not more palatable than the twenty-pound turkey which the prisoners of the jail, twenty in number, disposed of with as good an appetite as their more fortunate fellows of the outside world. … Orrin Thomas, who is an expert carver, occupied that highly important position, and performed the duties with the skill of an expert. …

Poor Martin Flanigan, who is to die on the gallows three weeks from next Friday, ate his Christmas dinner alone [in] his cell upstairs.

There was other, non-holiday news to report, as well. One of the top headlines in the 1881 Christmas Eve edition read, “A PISTOL SHOT: It Was Fired Through a Window at Mrs. Meisel.”

“SHE THINKS HER HUSBAND FIRED IT.” 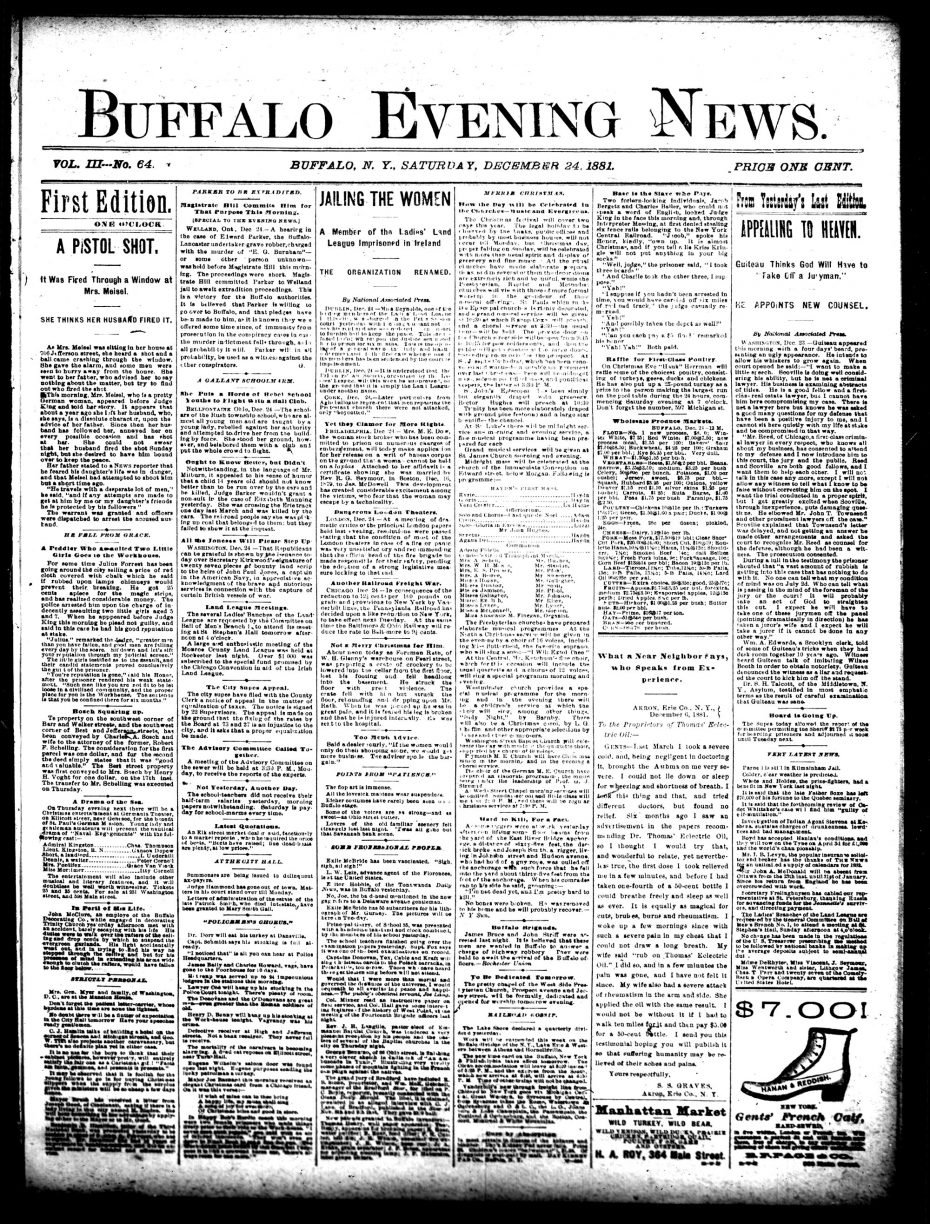