This is the surprise. You'd think the Rev. Roy Herberger would nurse a burning desire to see the Holy Land. His passion is gathering nativity scenes, mangers, from around the world. Viewing his collection has become a Christmas tradition in Buffalo, these nativities made of bottle caps or old auto parts or polished coal, each one interpreting the saga of a child born in utter humility.

While the Biblical story they invoke happened in Bethlehem, Herberger never daydreams about going there. His reasoning is laid out on table after table in a hall at SS. Columba-Brigid Church on Hickory Street, where 607 nativities remain on display each weekend until Jan. 7, one day after the Epiphany.

"What these are," Herberger said, "is a concrete expression of how people will take whatever they have, wherever they are, as a way to show what has deep meaning to them, as a way toward comfort and peace."

He has no doubt that visiting Bethlehem would powerful.

Yet he has learned, sometimes in the most searing of ways, that Christmas is often where you least expect to find it.

He discovered that truth during his Williamsville childhood, when his mother would set out small figures of the Magi, the three wise men, on one side of the living room, then move them a little closer each day until they reached the manger on the Epiphany.

He witnessed it during a career as a Catholic priest that began more than 40 years ago, a career often spent with "the downtrodden, the forgotten, the dispossessed."

Herberger said his faith in the season is renewed, rather than shaken, at moments of trial and loss.

His sister Judy died last month from bone marrow cancer. Her suffering was intense, and he tries to see her death as a blessing, a release into a place where the pain finally stopped.

Herberger and Sister Karen Klimczak, his closest friend, were co-founders of Bissonette House, a halfway house in Buffalo for former inmates. Klimczak was murdered there in 2006. Investigators said Craig Lynch, a resident of the house, set out to steal Klimczak's cellphone. He attacked her when she walked in on him during the theft. 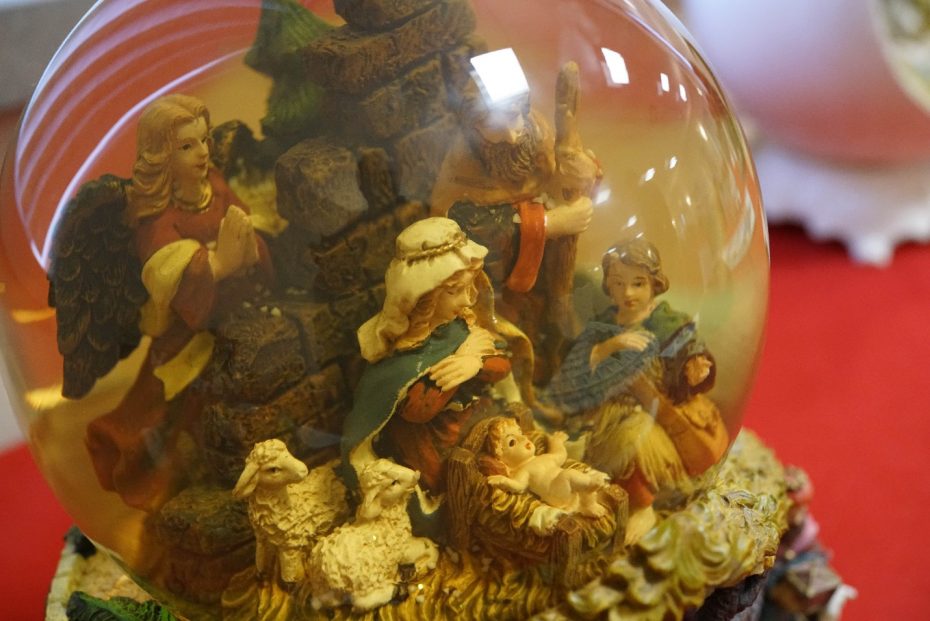 A nativity scene in a snow globe, part of the collection of the Rev. Roy Herberger. (Derek Gee/Buffalo News)

It is hard to find any Christmas in that story, but Herberger turns to his nativity scenes and points out several that came to him from Klimczak, including a set in which one of the Magi is a woman.

"Of course," said Herberger, "that would be from Karen."

It was both a gift and a statement, much like her life. Herberger talked about Klimczak's sense of humor, how she took part in a "clown ministry" and often wore the costume of a clown that she called "Bounce." He spoke of her selflessness, her dedication to the community, how she always chose to work with the castoffs and the wounded.

In her journey, he sees plenty of Christmas.

It all returns to his central point, the entire idea at the heart of the yuletide. The nativity, he said, is often "sugarcoated" with scenes of starry skies and gentle cattle and gleaming kings out of the East.

Consider the actual tale, Herberger said. A husband and wife were so destitute they could not find decent lodging. Mary gave birth to her child amid the straw used by animals in a barn. Their homeland was occupied by the Romans, and they fled to Egypt to elude a homicidal despot guilty of slaying children.

"Those were dark times," Herberger said. 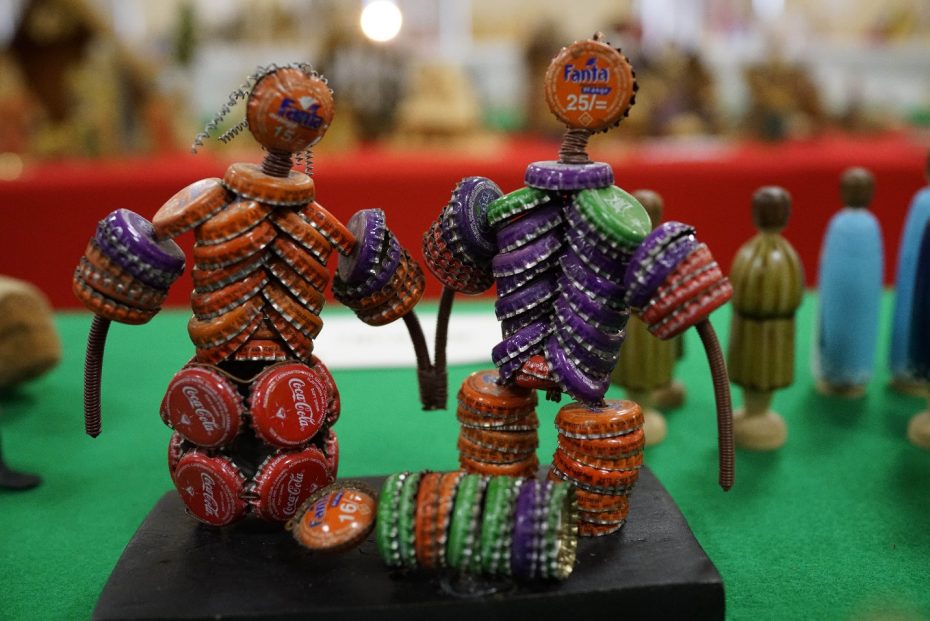 A nativity scene made of bottle caps, part of the collection of the Rev. Roy Herberger. (Derek Gee/Buffalo News)

The lasting power of the nativity, to him, is the vision of a ray of light piercing sorrow and despair.

Klimczak, he said, always felt that solace for the grieving is "the entire point of this."

In that sense, again, he finds Bethlehem at home.

His first and favorite nativity scene was one he bought in Baltimore, about 30 years ago. It depicts the holy family in ebony, with African features. That was a moment of awakening for him, the idea that everyone has their own image and path to the divine.

He bought the set and began his collection. Before long, friends were sending him unusual nativity scenes from around the world. He had been a prison chaplain, a priest drawn to the streets, but those sets found a lasting home when he became pastor at SS. Columba-Brigid.

While Herberger officially retired last summer, he waggles his fingers, as quotation marks, when he hears the word "retire." He sees it as another phase of his priesthood, a time for ministry and counseling and — beyond all else — listening, free of the business of running a parish. 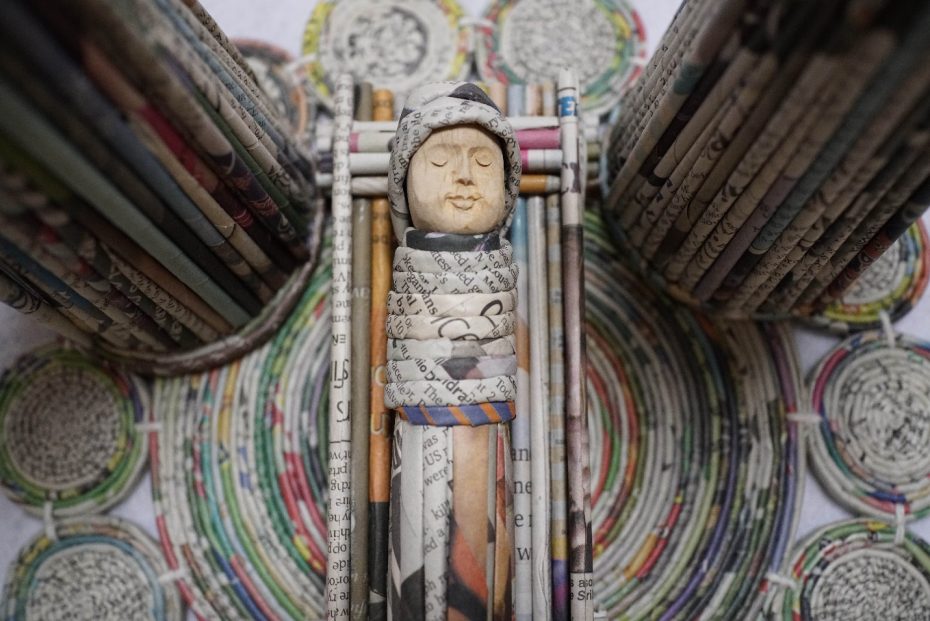 A nativity scene made of newspaper from the Philippines, part of the collection of the Rev. Roy Herberger. (Derek Gee/Buffalo News)

Still, retirement meant he had to find a long-term home for his collection. The answer came from the Rev. Jud Weiksnar, new pastor at SS. Columba-Brigid, who offered space in an old parish school building, at least through 2018.

Weiksnar sees the nativities as an appropriate tribute to Herberger, who was pastor when the old SS. Columba-Brigid was lost to fire about 13 years ago.

"When the church burned down, it was because of Father Herberger's vision — and because of the parishioners' love for him — that a new church was built and the parish lives on," Weiksnar said.

The decision is a relief to Herberger. He hopes artists and schoolchildren will spend time with the collection. He wants people to enjoy the display, even if it also serves a larger purpose.

His nativities go to all extremes. He has a giant inflatable Mary, Joseph and baby Jesus, and another scene in which each figure is a tiny grain of rice. He has nativities that rise toward works of art, sculpted passion evident on the faces of Mary and Joseph, and he has others with themes that are downright comical, such as a Harry Potter set or one with a Star Wars theme.

Some of his nativities are crafted from fine stone. Others are made from such materials as newspaper.

What he seeks, in the end, is one overall reaction.

"Christmas," he said, "still has that same meaning. It was the day when God took flesh and gave us hope."

Beyond the door, on the East Side, he takes that faith to Bethlehem.