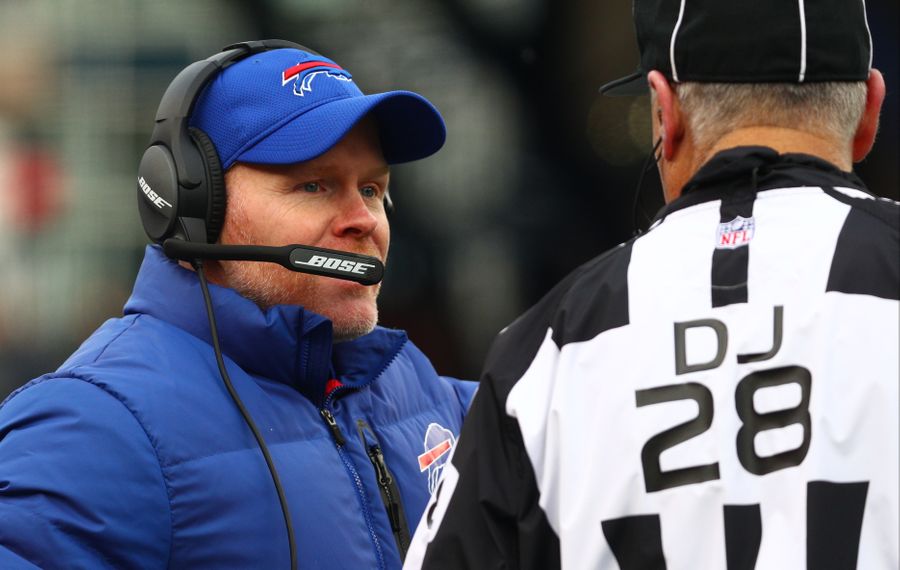 Upon further review, the controversial call to overturn a Kelvin Benjamin touchdown wasn't the only reason for the Bills' loss Sunday in New England. But it was the one players most wanted to talk about afterwards. "They felt that the Patriots were handed a big, fat Christmas gift at their expense," Vic Carucci writes.

"Somebody in Boston got the refs," Jerry Hughes was overheard saying as he walked into the locker room. "It’s crazy, man," LeSean McCoy said, "because you put so much into it and then to get robbed like that.” The Bills had similar conversations amongst themselves at halftime, Carucci reports, until Eric Wood stood up and declared, "just move past it." In the second half Sunday, they were unable to do that.

FWIW, here are explanations from the NFL and referee Craig Wrolstad.

Playoff picture: Despite the loss, the Bills can still end their 17-year playoff drought with a win on New Year's Eve in Miami. They'll just need some help to do it. Nick Veronica explains. Related: Next week's finale has been flexed to a 4:25 p.m. kickoff.

Jerry Sullivan: Sean McDermott disappoints with a very drought-like decision to punt on fourth-and-1, and the Bills are still in the hunt despite a troubling loss.

Tim Graham: Replay mess is another reason the NFL is losing my interest.

Bucky Gleason: Tony Romo's suggestion that Tyrod Taylor could return to the Bills next season is little more than a rumor.

Notebook: Tre'Davious White and the Bills defense didn't try to get retribution on Rob Gronkowski, the Bills were terrible in the red zone, E.J. Gaines didn't play, and Travaris Cadet broke his ankle.

Gronk apologizes: Not to White this time, but to the Bills themselves. "Sorry to them for that," Rob Gronkowski told the Boston Globe. "I don't know, it's just cool when you're hometown team passed on you twice in that draft, and you kind of remember it still."

Take a look: Photo gallery from the lens of James P. McCoy.

What They Said: McDermott on the overturned touchdown: "I am at a loss for how a play like that can be overturned." Full postgame transcripts.

Frustrated fans: The most painful Twitter reactions to the Bills' loss.