Members of the Bills and Sabres have been giving back to the community this holiday season.

Earlier this week, the Eric Wood Fund through Stone's Buddies — a program to help families of chronically ill children — helped take 50 kids who have spent significant time in the hospital this year to dinner and on a shopping spree with $300 to spend at Walmart.

We asked some of those invited to describe their experiences (have the tissues nearby).

Here is a thank-you note to Wood from Julian, a 10-year-old with epilepsy. He was diagnosed in the third grade and now is in the fifth grade.

The "P.S." referred to photos of Julian and Wood that he sent along.

Here is what his mom, Colette, wrote:

For my son, it made him feel comfortable with himself. He looks perfectly fine, but deep inside I think he feels different. He plays soccer (goalie) so we have never made him feel like this illness defines him. Being with Eric and the rest of the players who attended the event made Julian feel very special.

Julian happened to spend most of the time with Dion Dawkins. Julian has met him on a few other occasions, and every time they are together it is like a big brother/little brother situation.

As for Eric Wood, he is extremely humble, kind and generous. My son was on top of the world. He came with a list of family members and stuck to the list before he even thought about himself.

It is a wonderful foundation and we are grateful to be involved. 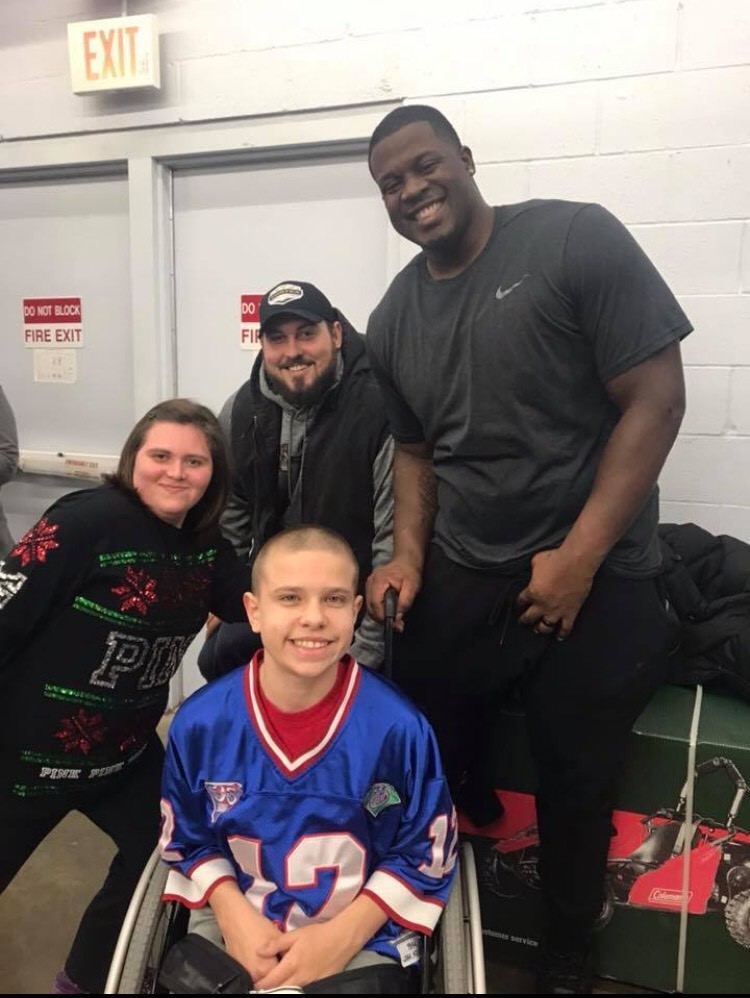 That was what was happening at the Hamburg Walmart on Monday night. That and Eric Wood making memories that will last a lifetime and dim some of the bad ones that these kids have gone through.

As a parent you are always aware of how your child "looks," how they are acting and if that shoe is going to drop. You watch them breathe when they are sleeping. To be able to hear Francesca's laughter from aisles away catches in my heart. Monday was a chance for our kids to be just that ... kids. It was also, I think, for some pretty awesome football players to be Basketball Stars! But they also had the chance to be normal and act like kids, too.

There are so many things that Eric and Leslie have done for Stone's Buddies, things that as a parent of a chronically ill child we could never give or do for her. I think Francesca said it best as she was drifting off to sleep that night: "Mom, I had the best night of my life."

I can say without a doubt that the experiences with Eric Wood and the Bills have been life-altering for our child. Sofia is a 10-year-old without a properly working immune system. As a child she was often sick and missed parties, play dates and more.

For an adult, we understand that sometimes you miss an activity when you are sick; for child it can be devastating. She has learned that her life is not like other kids and often responds with "it could always be worse, but it could always be better."

Moments like Monday night take the sting out of lost opportunities with friends and family. You have to see Eric Wood interact with the children to understand how incredible the entire experience is. Each child feels valued and appreciated. There are not enough words to express our appreciation for Eric Wood and the entire Buffalo Bills organization.

Many know Eric as a tough center of our beloved Buffalo Bills. What they may not know about is his tremendous soft spot for kids dealing with illnesses and the families that support them. We've met Eric on several occasions; he's always a genuine guy willing to give freely of his time. Our three children have spent more days than I can count inside the walls of Children's Hospital. Having athletes like Eric show support and compassion is part of the silver lining we do our best to focus on.

Monday night was special. Yes, Eric afforded them an opportunity like no other, but it was more than that for us. The shopping was very much appreciated, but my youngest will take with him the memory of Eric and his teammates playing basketball in the aisles of Walmart, cheering him on. He became so engrossed in the game that he forgot about the shopping. The next great memory came as I sat in the garden center of Walmart with my other son. I've never actually sat in Walmart and relaxed, but that we did, for just a moment. It was as if no one else was around despite the onlookers trying to figure out what we were up to. Eric ate pizza and chatted with my son about sports and sticking with your goals even when it's difficult. A life lesson sure to stick with him now and in the future.

We couldn't be more grateful to have spent time with Eric, his wife, adorable daughter and the teammates who took time out of their own busy lives to spend it with us. The world needs more people as accepting and willing to share as Eric and his family.

My daughters have been members of Stone's Buddies for many years. We were blessed with the opportunity to attend the party this past Monday, hosted by Eric Wood. This was actually our first time meeting Eric, and we found him to be so genuine and caring. He so generously gave the children the opportunity to shop for their families and friends, yet Eric seemed to be the one getting the most enjoyment out of the evening. The other members of the Bills that joined the party were very supportive of the families as well.

A few things that made the night special:

1) The children were encouraged to shop for gifts for their families. I found this so refreshing because often these events give gifts TO the children, but Eric used this as a teachable moment to help the children understand that “it is more blessed to give than to receive.” Through his generous example, the emphasis was placed on giving to others, which can sometimes be a rarity for society in general and children in particular.  While this is a lesson that we, as parents, try to teach our children often, having a role model such as a pro athlete reinforce the lesson really made it unforgettable.

2) One of my children had quite an extensive list of family and friends that she wanted to give gifts to. Although I complimented her generous desires, I had instructed her to scale it back a little, trying to teach her those difficult "mature" lessons of budgeting and living within her means. She prayed that somehow she would be able to give to all on her list, and then we received the invitation to Eric’s party. After receiving her gift card to go shopping, she happily filled the cart with items for everyone on her list, and even added in goodies for the pets! She keeps telling us how excited she is to give out gifts on Christmas and was so thrilled to have the opportunity to fulfill her list. When I asked her why this was so special and important, she said that she just really enjoyed the atmosphere surrounding Christmas, where everyone is happy and thinking of others, and wanted to be a part of that.

3) Our family had the opportunity to sit and visit with some of our "hospital buddies" in a relaxed and comfortable place. Sometimes the only time we get to visit each other is at the hospital, so having a chance to visit when everyone is healthy and enjoying their time was a true blessing indeed!

Overall, this was an amazing event and we were so overwhelmed to be a part of it. I hope my words can convey a little bit of how much it meant to us. 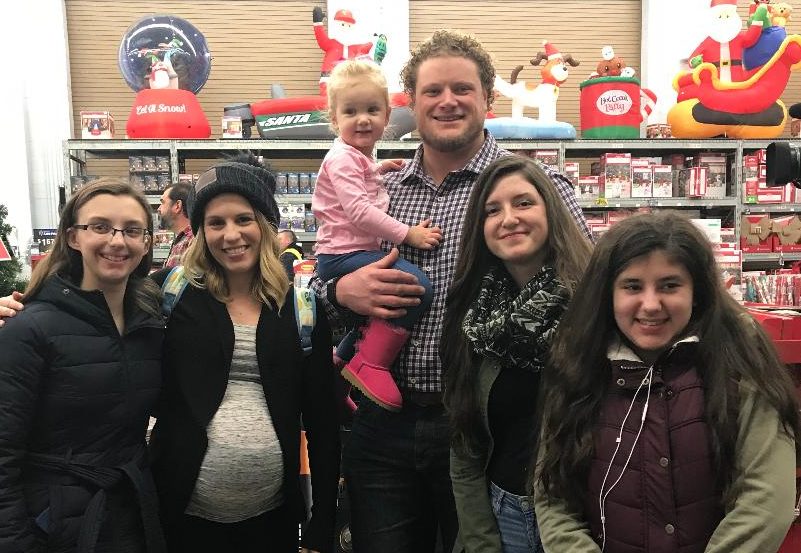 I would like to send a HUGE thank-you to Eric Wood and his family for sponsoring such an awesome event! The generosity of Eric and his foundation is overwhelming.  My daughter, Zoey, suffers from a chronic illness, Crohn’s Disease.  Being a teen is challenging enough; now add the mental and physical aspects of a chronic illness. ….  Being sick and dealing with all those added emotions on top of trying to manage the normal “teenager” aspect of life is quite the ordeal.

Through Stone's Buddies, Zoey made two close friends, Mary Teresa and Amanda, who also suffer with IBD.  They can lean on each other and talk to each other when nobody else can truly understand.

Events like “Operation Big Santa” are such a welcomed distraction.  For those few hours the kids and their families get to be just that, a family.  There’s no poking or prodding, there’s no doctors or machines — there’s just smiles!  The experience and encouragement that we receive for those few hours really makes a difference in our lives.

We had the pleasure to talk to Mr. Wood for a few minutes.  You could tell immediately how passionate he is about what he is doing.  That he wants to make an impact on these families and kids.  The big smile on his face confirmed his passion.  He stated that he knew what it was like to grow up with a sick sibling.  I could feel the tremendous compassion he had towards the families and what they were going through.

Thanks again to Mr. Wood.  Thank you for giving us an evening to just be ourselves.