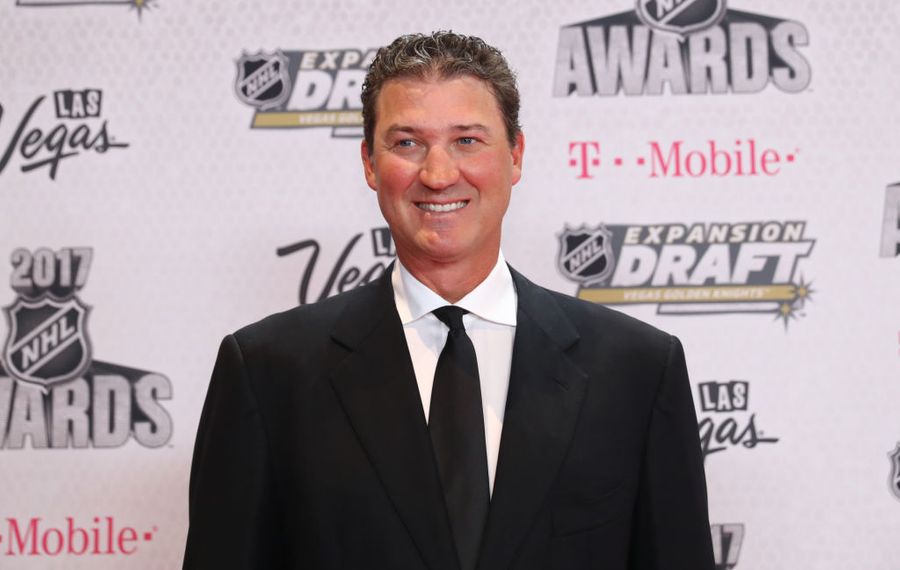 As part of the NHL's 100-year anniversary, the league sponsored an online vote for the greatest moment of its first century of play and the bracket-style "tournament" was an interesting process to follow.

Just think of all the things that got notice. Bobby Orr's flying-through-the-air goal that won the 1970 Stanley Cup. Wayne Gretzky's 50 goals in 39 games. Or his 77th goal of the 1981-82 season, which came at Memorial Auditorium. The Fog Game at the Aud. Dynasties of teams like the Canadiens and Islanders. Patrick Kane's Cup-winning goal in 2010 that snapped the Blackhawks' 49-year drought.

The winner was announced at last weekend's NHL100 Classic in Ottawa and it was Mario Lemieux's five goals/five ways game against New Jersey at old Mellon Arena in Pittsburgh on New Year's Eve, 1988. It struck a particular chord to this corner.

Just by sheer chance, I was there.

Regular readers of this space know I have long had a huge interest in visiting arenas and stadiums and it dates back many years. Nearly 30 years ago, a college friend and I were talking about the barn affectionately known in Pittsburgh as "the Igloo" and what it would be like to check out a game there. 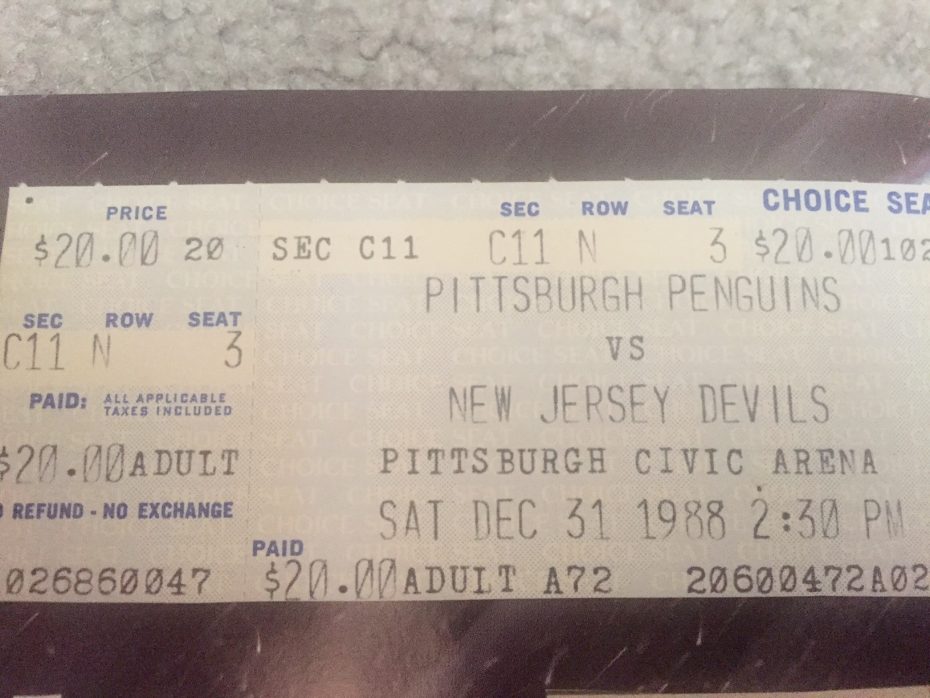 Scheduling for a couple years never worked to see the Sabres but the '88-89 schedule included an unusual quirk: A Saturday matinee on New Year's Eve against the New Jersey Devils. A quick Ticketmaster call a couple weeks earlier got a couple tickets and off we went.

History wrote the rest. Lemieux had five goals and three assists in an 8-6 win over the Devils. He had three goals in the first 11 minutes, one at even-strength, the second on a superhuman short-handed tally and the third on a power play. In the second period, the building was up for grabs when Lemieux scored on a penalty shot and he added an empty-net goal just before the horn to cap his day.

It was the first time — and remains the only time — a player has scored five goals in five different ways. Back then, of course, you knew you had seen something special with a five-goal game. It's only been done 60 times in NHL history, last by Detroit's Johan Franzen in 2011, and only once in Sabres history (by Dave Andreychuk at Boston in 1986).

But in the pre-internet days, news didn't travel as fast. We left the game thinking we saw something cool. It might have been a week, maybe even two, before references started coming out that it was downright historic. Lemieux was already a superstar, still just 23 years old, and hit 100 points on the season that day -- on New Year's Eve in Game 36 of the season. Unthinkable now.

He would finish that season with astounding career highs in goals (85), assists (114) and points (199). But the Penguins had yet to make the playoffs, let alone with any Stanley Cups, with No. 66 in charge. They finally went that season, getting to the second round, and won their first Cup in 1991.

Lemieux's goals that day were scored with a wooden stick and I've looked at it a few times during trips to PPG Paints Arena. It's in Suite 66, a gathering place for high roller fans on the ice level that allows them to watch the Pens enter and exit the ice from behind glass.

Lemieux was presented his award last week by Canadiens legend Guy LaFleur during a timeout in the Habs-Senators outdoor game and given a commissioned painting to mark the achievement. How fitting: That was a game that certainly qualifies as a work of art.

It will be interesting to watch the attendance numbers in KeyBank Center this week when the World Junior Championship gets underway. As we learned seven years ago, interest and sales will pick up as the tournament begins but the rumblings for this event have not been good in recent days.

Frankly, the International Ice Hockey Federation should be stepping in and doing more to rein in the pricing of one of its marquee events. Does it want revenue and people in the stands or does it want acres of empty seats?

USA Hockey and the Sabres went for high-priced, multi-game ticket package sales for the last year and it was clear they were hoping to rope in all those wacky Canadian fans like they did seven years ago. Except for the fact that the tourney has been in the Toronto area now twice in the last three years and the secondary ticket market has exploded, allowing customers to pick and choose and not be committed to lots of games they don't want to see.

It's a flawed strategy.

Hockey Canada made the same mistake two years ago when the tournament was co-hosted by Montreal and Toronto. Big packages, big prices. Things were generally OK in Toronto but Montreal's Bell Centre, with a capacity of more than 21,000, proved to be a much harder sell.

No less an authority than longtime IIHF president Rene Fasel criticized the arrangement when he said, "If you would do this pricing in Europe, you would have nobody in the arena."

This is a tournament that thrived in places like Saskatoon and Grand Forks, N.D. At least when it's in North America, the movement has been away from that, to big cities and NHL arenas where you can ostensibly charge big prices. I don't doubt there will be plenty of people in the seats downtown the next couple weeks when Canada is on the ice. But let's see about anybody else — including Team USA.

What happened to the alums?

Why is there no Sabres-Rangers alumni game in Citi Field as a prelude to the Winter Classic?  Multiple sources say it appears the league has moved on from the idea after staging the contests for a few years. It is a heavy lift to run huge crowds through a stadium for two straight days in the winter, especially at baseball stadiums that are generally winterized and have to be "reopened" for the NHL.

But more important, the league has annual concerns about being able to maintain good ice for the actual game because of the heavy use the rink gets on Dec. 31 with team practices also on the schedule.

Early forecast for Jan. 1 in New York City: High of 24 degrees, 20 percent chance of snow, winds at 12 mph. That would make for some optimal ice conditions.

During a conference call last week, the folks from NBC put on a happy face about having the last-place Sabres in their Winter Classic, with analysts Mike Milbury and Pierre McGuire hoping (insisting?) that the national stage in Citi Field will inspire them to play at a higher level than they've been at most of the season.

"They’re just a franchise that’s transitioning," said McGuire. "This game should be a launching point for Jack Eichel, Ryan O’Reilly and for Rasmus Ristolainen. Those are the three young players — along with Sammy Reinhart. I should say four young players — on that team that need to be the catalyst to engineer this rebuild. I think they’re going to be challenged by their coach as an organization to show that on a national stage."

The Sabres are in the game because it's the 10th anniversary of the iconic 2008 contest in the snow at Ralph Wilson Stadium. While teams now battle for the right to play in the game, that wasn't the case 10 years ago. Former owner Tom Golisano and managing partner Larry Quinn stepped forward and made it clear the Sabres were willing to take a big chance as the first host. NHL and NBC officials have not forgotten about that gesture.

"The Sabres deserve this," said longtime NBC executive producer Sam Flood. "They were the ones that took the risk and said they were ready to host that first Winter Classic because (NBC Sports President) Jon Miller had been looking for an opportunity to do this outdoor game. The Sabres were the club that stepped up and took the risk and turned it into a must-see TV moment. I think it changed the way hockey was viewed. It made events for the regular season."

* Sabres winger Kyle Okposo on his old team, the New York Islanders, coming back to Nassau County with a proposed new arena by Belmont Park: "That's awesome for them. That's where they deserve to be and that's where they should be. Everything has been said about Brooklyn and what's going on there and I'm so happy for those guys that they got that done."

* Game of the year so far has to be Vegas' thriller over Tampa Bay on Tuesday night, as defenseman Shea Theodore capped a four-point night by scoring the game-winning goal with 2.3 seconds left to give the Golden Knights a 4-3 win.

"It felt like a playoff game," said Tampa Bay coach Jon Cooper. "Felt like that game could have been played in May, not December."

Two nights earlier, Cooper got a sneak peak of the Golden Knights and T-Mobile Arena during Vegas' game against Florida. Cooper was blown away by what he saw inside and outside the league's rollicking new facility.

"Without even looking at the product on the ice, the product outside and the venue was spectacular," Cooper told the Tampa Bay Times. "I just thought right away, ‘What a coup for the NHL to open up shop here.’ They’ve done an unbelievable job. The band up top. The chants, right into the goal song. Really well done."

* On the ice, it's time for everyone to stop saying the Golden Knights are a fluke and will come back to the pack as they try to sneak into the playoffs. They entered the weekend leading the Western Conference in points percentage and were two points out of the West lead -- with three games in hand over pace-setting Los Angeles.

"It’s pretty remarkable what’s going on," Cooper said. "You’re looking for holes on that team, and you just don’t see them. They roll four lines at you, six ‘D.’ They’ve played four or five goalies and continue to win, because their team is really good. It was pretty impressive to watch."

* Hard to Figure Department: The Capitals entered the weekend second in the East while the Flyers hit town Friday with a 7-1 record in their last eight. But each team has now lost to both the Sabres and Coyotes, the cellar dwellers in the respective conferences.

Arizona rookie Clayton Keller scored the overtime winner for the Coyotes Friday against the Caps, a few hours after the Yotes' official feed tweeted a picture of a 12-year-old Keller with Caps star Alex Ovechkin in 2010.

When you beat your 12-year-old idol.