First impressions matter in health care, a part of the thinking behind plans for a new entrance at Erie County Medical Center.

The medical center released artist renderings of the proposed entrance, a project included in $100 million worth of planned construction and improvements at the Grider Street hospital, including a new emergency/trauma center.

The entrance features a large open area and will be named the Russell J. Salvatore Atrium following the restaurateur's $1 million donation toward the work.

ECMC has raised $7 million so far in a public fundraising campaign for renovations that also will see the medical center get new boilers, chillers and windows. The bulk of the financing will come through a borrowing deal with Erie County.

"As we've grown, the current entrance is no longer adequate for people waiting for loved ones getting care or for transportation. We're also trying to improve the image of the hospital, and the first impression people get is when they enter the building," said Thomas J. Quatroche Jr., president and chief executive officer.

Construction on the entrance, which adds about 4,000 square feet of additional space to the lobby, will begin in the spring and take about 15 months to complete, he said. Site preparation for the new emergency/trauma department, which accounts for $55 million of the total costs, has begun. That part of the project is expected to be completed by the end of 2019.

"I know personally what a remarkable hospital ECMC is, with the most talented and dedicated doctors, nurses and support staff. This new entrance to the hospital, which I am very proud to support, will provide an inspiring and welcoming environment to everyone who enters. As our community’s regional hospital, providing quality, life-saving care to all, the new Russell J. Salvatore Atrium will contribute positively to each patient’s experience at ECMC,” Salvatore said in a statement. 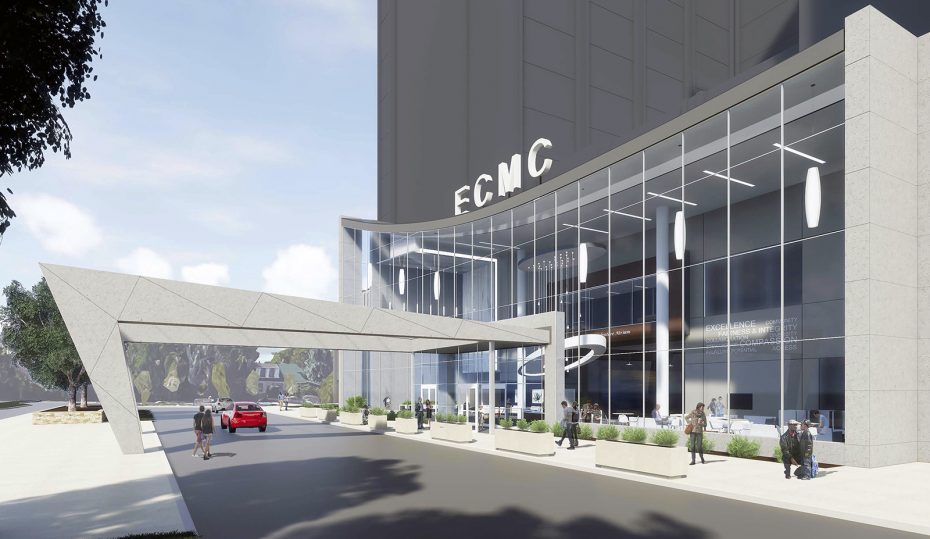 An architectural rendering of the exterior of the Russell J. Salvatore Atrium at ECMC. (Rendering by Clark Patterson Lee)

ECMC recorded nearly 70,000 visits to the emergency department in 2016, roughly double the number since the last time the emergency room space received a substantial renovation, in the late 1990s, according to the hospital. Plans call for a 54,000-square-foot facility on the west side of the medical center with 54 treatment stations – including four dedicated trauma rooms, two behavioral health safe rooms, two isolation rooms and four medical resuscitation rooms. That’s compared to the current 34 rooms in 26,000 square feet.

The 69,290 visits in 2016 included 12,247 patients that got routed to the hospital’s adjacent Comprehensive Psychiatric Emergency Program, the only program of its kind in the region. ECMC also operates the region’s adult Level 1 trauma center, an area of the emergency department staffed to treat the most extreme injuries, such as from car crashes, major burns and gunshot wounds.