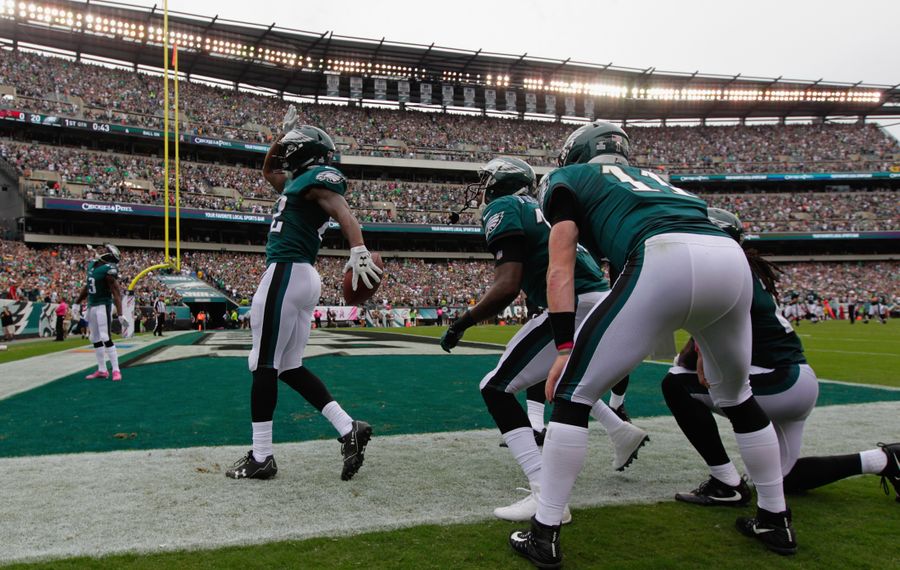 A fair amount of what will be remembered most from the 2017 NFL season falls under the heading of items the league would prefer to forget.

Well, here's something else for which the '17 season will be remembered: the year that fun returned to the No Fun League.

The NFL's relaxation of its celebration rules opened the door to players showing a great deal of creativity after scoring touchdowns. And they've taken full advantage of it with choreographed skits that are a huge hit with fans and the subject of many a viral video.

The Philadelphia Eagles have been the most innovative, with players gathering for a baseball sketch that includes a pitcher, batter, catcher and umpire. They've also pretended to be falling bowling pins, and their defense got together to perform the "Electric Slide."

And, in the lone highlight of the Bills' Thursday night blowout loss against the New York Jets, you saw rookie receiver Zay Jones celebrate a touchdown by acting out a "Star Wars" jedi lightsaber duel with fellow receiver Andre Holmes, ending with Jones putting a "force choke" on Holmes.

"There are a lot of rules I don't like about the NFL, but this has to be one of the rules I do like," Hall of Fame wide receiver Tim Brown said by phone. "I do think this is good for the NFL, I think it's good for the teams, it's good for the players. Guys have been really creative in what they're doing, but I don't think it's taunting or making the guy look bad, making the team look bad because all the antics I've seen have been things not having to do with the other team. If we ever saw a group get together in some kind of way mimicking the other team, then I think it would be in bad taste.

"But I think right now what everybody's doing is fun. You almost look forward to seeing what the Philadelphia Eagles are going to come up with because they've been pretty creative."

Besides creativity, the other thing the celebrations have in common is they go well beyond an individual looking to intensify the spotlight already trained on him for scoring. Most, if not all, of the other members of the offense join in, turning the end zone into a stage and reinforcing the concept that more than one player has a role in scoring.

"I think that's the best part about it," Hall of Fame receiver Cris Carter, who usually celebrated touchdowns by kneeling and saying a prayer, said by phone. "It's helped the team come together. If they spend more time practicing these things and doing different things, I think the kid part of the game comes out in them. When you first saw they changed the rule, you thought, 'OK, we're getting ready see the wide receivers really become more of the focal point.' But I think what it's done to teams and the overall impact on the team has been very, very positive."

For the longest time, the NFL frowned on such demonstrations because of their emphasis on an individual and their tendency to go over the top with trying to embarrass the opponent. Players drew penalties for "excessive" celebrating. If a "prop" was used (such as the football, which served as the bat in the Eagles' baseball routine), that would result in a penalty.

"We did go through a period where things got a little raunchy and things like that, and they had to correct it," Carter said. "But they overcorrected it."

Former Rams receiving standout Torry Holt remembers when group celebrations, such as the ones that have been often seen this season, were especially frowned upon. He knows, because he and the rest of what was called the "Greatest Show on Turf" not only made frequent visits to the end zone, but also made a point to celebrate them with multiple players.

"So I'm glad that the league is allowing players and teams to now celebrate in their accomplishment of scoring a touchdown, because it is hard to score touchdowns. And guys put in a lot of work during the course of the offseason, training camp and the regular season. I think it's only right to allow them to express themselves or reward themselves with a celebratory celebration after a touchdown. I think it's a good for teams and camaraderie. And I think it's a good sign to the young folks, too, that watch our game to know that, 'Hey, they're grown men and they're professionals, but there's still fun in the game.'"

The fact players were upset by the anti-celebrating stance didn't seem to make all that much of a difference to league executives and club owners. But when fans, especially younger ones, consistently voiced their disapproval, the NFL started listening.

In studying what was hurting its efforts to keep and/or attract young fans, the league determined that discouraging celebrations was high on the list. The act of reaching the end zone did need an exclamation point, something that is a significant part of the popularity of playing "Madden NFL."

"People forget, it's hard to score in the National Football League," Jones said. "A lot of time from coaches, a lot of time from players go into this, so when something works, you should be able to be like, 'We did it!' and not it be just some down-played, 'Oh, whatever.' If it was easy, everybody would be out there scoring. I like it this way, I think it's fun this way. I think it keeps everything light and fun and it reminds people of the gift of playing football."

Given Sean McDermott's button-down, all-business persona, one might assume he would have issues with celebrations. On the contrary.

Although McDermott constantly preaches the importance of having a team-first approach, he agrees with the premise that players should enjoy themselves and recognizes that scoring a touchdown should be treated as a joyous occasion.

"I think it's good for the game," McDermott said. "There's a lot of energy around it, I'd say, at the player level. And I think our players have a platform and can be great examples to the youth in America and the world, really, for doing things the right way. And what it appears is they've stayed within that window. This is a game, at the end of the day, that's meant to be played and to have fun with. The juice that's come from it has been pretty cool. On Sunday nights, when you watch the highlights, you'll see a play or two or a team or two that has a pretty unique celebration, which is fun to watch."

That's the NFL's theory. Find more ways to make the game fun to watch, and that, presumably, will help attract more eyeballs.

"I'm sure it has some effect," Carter said. "We're in the entertainment business. I think the fans, overall, will be happy because it hasn't slowed down the game. And it's provided us with a lot of good clips during the week.

"I mean, man, life is suffocating. I think for people to be able to take a break and be able to see that grown men are still having fun playing the game like kids, yes, I think it helps the product."