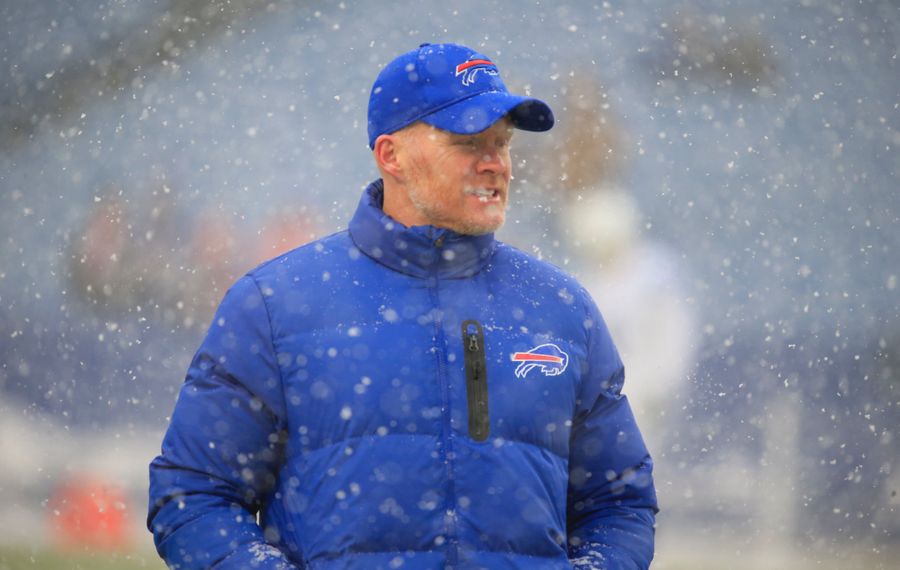 The last time the Buffalo Bills faced the New England Patriots, the Bills' run defense was a lowlight of a defensive effort that otherwise did plenty to frustrate Tom Brady and the rest of the Pats' passing game.

The Bills allowed the Patriots to rush for 191 yards and average 5.5 yards per carry in the 23-3 victory on Dec. 3 at New Era Field.

The struggles of Buffalo's run defense were hardly an aberration. The Bills rank 25th in the NFL against the run.

So what do you do, Sean McDermott, as your team gets ready for a Patriots rematch at Foxborough, Mass., Sunday? Throw your hands in the air and surrender to the fact that your defense simply isn't as strong as it needs to be, especially for a team still contending for a playoff spot?

"We're a work in progress as a football team, collectively, all three phases, which is somewhat to be expected in the first year as we continue to build this thing," McDermott said Friday. "And building alignment is key, in terms of coaches understanding what I want, how we do things and then also with the players and, in this case, how you become a good run-oriented defense. The understanding and also the habits that go along with that — the techniques, the fundamentals.

"That's where the building part comes in, also, and the vision of that growth mindset of how we've got to continue to improve every week. That's what makes it fun and exciting, to see how players really embrace that every week, where we're going and how we're trying to get there."

The mother of Bills running back LeSean McCoy is featured along with several other NFL moms in a feature on ESPN's "Sunday NFL Countdown," which starts at 10 a.m. Sunday.

According to an ESPN release, McCoy's mother will be on another "NFL Moms Roundtable" led by Annie Apple, the mother of New York Giants cornerback Eli Apple.

Wide receiver Andre Holmes has been ruled out of Sunday's game with a neck injury.

Running back LeSean McCoy was given a day off from practice Friday to rest and also take some stress off of a knee injury. Benjamin, Williams, Gaines, Miller, O'Leary, and tight end Charles Clay (knee) were limited in the session.

The Patriots list running back Rex Burkhead (knee) and defensive lineman Alan Branch (knee) as out for the game.