To get to the Festival of Lights at Our Lady of Fatima Shrine, follow the star.

The star shines in Lewiston, at the corner of Swann and Creek Roads. Turn when you see it, head down Swann, and drive for a little bit. There is no missing it, trust me. When I made the trip, on a Monday at around 6 p.m., it was dark, and snow was swirling. I worried I'd missed it, when --

"You have reached your destination," announced the robotic voice of my GPS.

Pulling over, I sat staring. 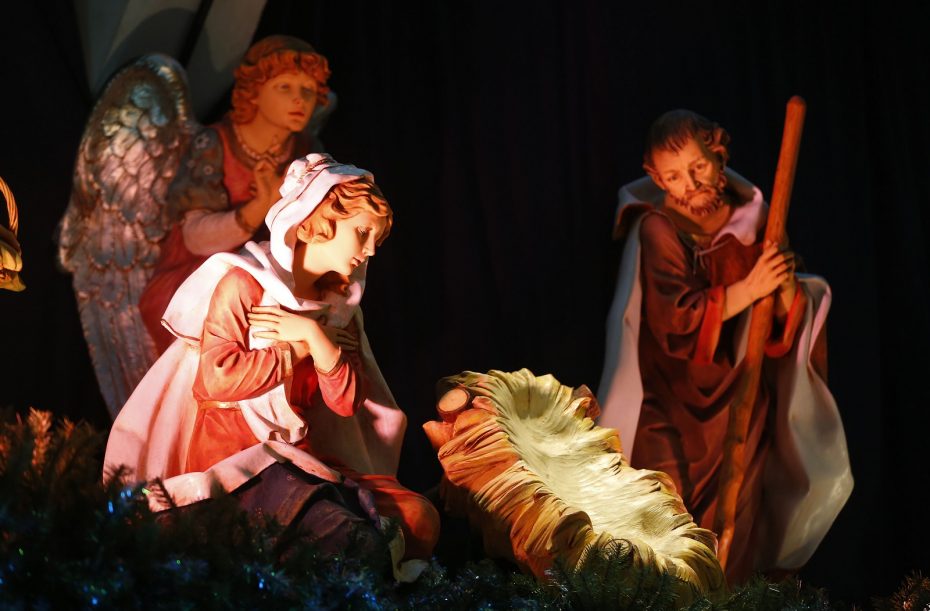 The sanctuary has a large nativity scene above the altar for the Festival of Lights at the National Shrine Basilica of Our Lady of Fatima. (Mark Mulville/Buffalo News)

The place was a kingdom of light.

Its official name is the Basilica of the National Shrine of Our Lady of Fatima. And it lived up to it. Lights, all colors, twinkled and sparkled in patterns that began at the roadside and reached far into the distance.

Over it rose an illuminated dome that seemed to glow, like something not of this world. Looking around for an entrance, I perceived a long, wide path lined with lights. It looked like the road to Oz, or Narnia. 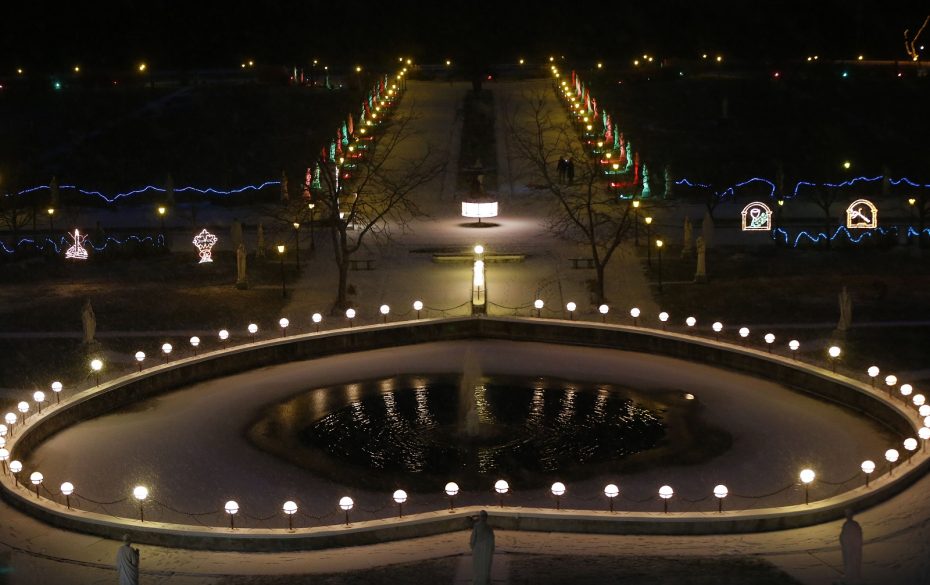 People walk the grounds for the Festival of Lights at the National Shrine Basilica of Our Lady of Fatima. (Mark Mulville/Buffalo News)

You feel humble, turning your car into such a promenade. But no sign said not to. And so I drove in, into this land of snow and lights. I parked alone in the corner of a vast parking lot.

The big gift shop was open, but otherwise, the place was deserted. By all accounts, that's unusual. The shrine, run by the Barnabite Fathers, is a tourist destination. Its 16 acres were donated in 1954 by a couple who had been healed by the intercession of Mary, the mother of God. Buses come down constantly from Toronto, I have learned. Pilgrims flock to the shrine, said to be the site of cures and miracles.

The Festival of Lights is a kind of miracle in itself. The Rev. Julio Ciavaglia, the rector of the shrine, began it in 1990 because he was dismayed by the secular nature of most holiday light displays. He decided to design his own.

He started small, with a nine-foot tall Nativity scene, with a 14-foot-tall camel and an angel hovering 20 feet above the Holy Family. But as a clerk in the gift shop explained, "Every year, he adds something." 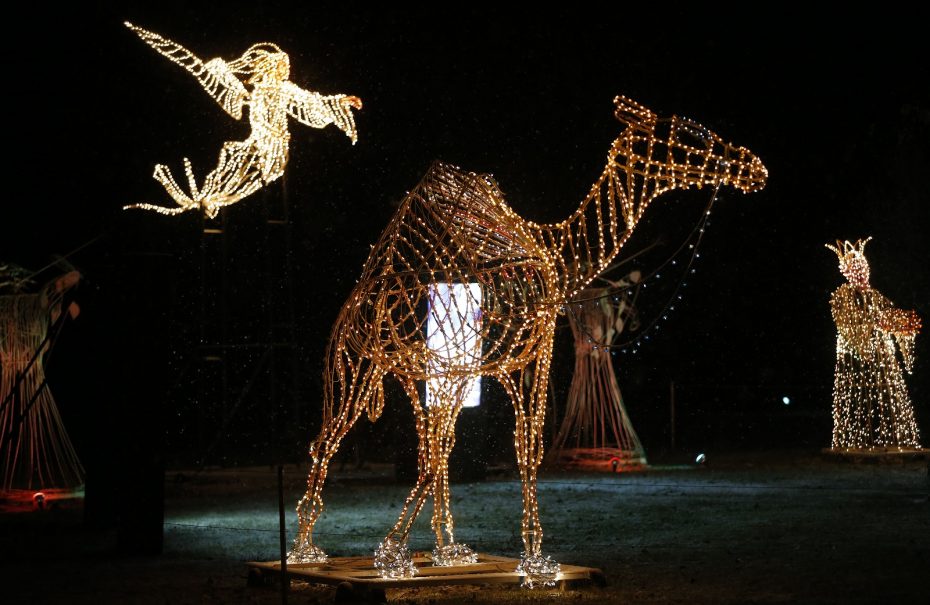 Part of the shrine's nativity scene shows a camel and an angel for the Festival of Lights in Youngstown. (Mark Mulville/Buffalo News)

By now, the display fills all the acreage and is likely visible from outer space.

You approach the Basilica via the Avenue of the Saints. Marble statues, life-sized and lighted up in red and green, lined the walk. There are over 100 of them, and as the shrine's literature points out, they represent saints from every race and walk of life. Nearby is the Rosary Pool -- chilly in the winter, but strangely beautiful. 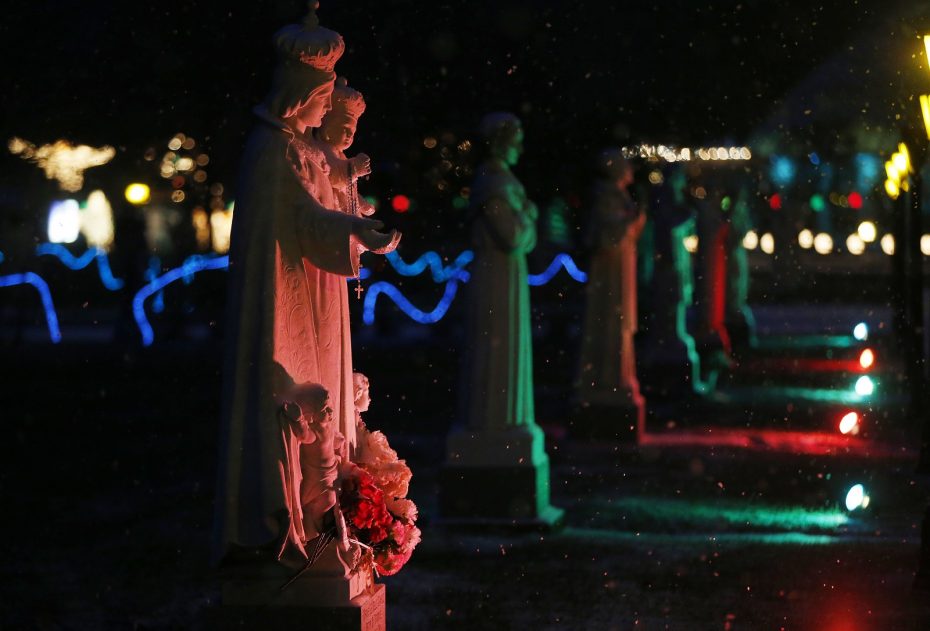 Statues are illuminated in the falling snow for the Festival of Lights at the National Shrine Basilica of Our Lady of Fatima. (Mark Mulville/Buffalo News)

Golden lights outlined a flock of seven doves, suspended in mid-air. I passed by St. Joachim, St. Denis and St. Nicholas with the children. Iridescent panels explored the Mysteries of the Rosary. There was no sound except for the splashing of the Rosary Pool and faint Gregorian chant, emanating from heaven knows where.

The Basilica itself, open daily for Mass and confessions, was deserted. How strange that not a soul was here. Emerging, I saw in the swirling snow something I hadn't noticed before -- a flight of stairs. I began to climb them.

High above me, I could make out the tall stone figure of a woman, her back to me. Up I walked, through the snow, toward her. It felt like a dream.

Reaching the top, I walked around the statue, looked up, and beheld Our Lady of Fatima. I have since learned that the figure, carved from Vermont granite, is 13 feet high and weighs 10 tons. At the time, I wasn't thinking of statistics. I just looked up and saw her gazing down at me, with a smile that seemed to reflect a kind of sympathy and, I have to say it, humor.

What are you doing here? she seemed to be asking. On this snowy night? By yourself?

For I don't know how long, both of us simply stood there. Then I heard voices. Two young women had joined me at the foot of the statue. They were from the area, as it turned out, and more familiar with this place than I was. 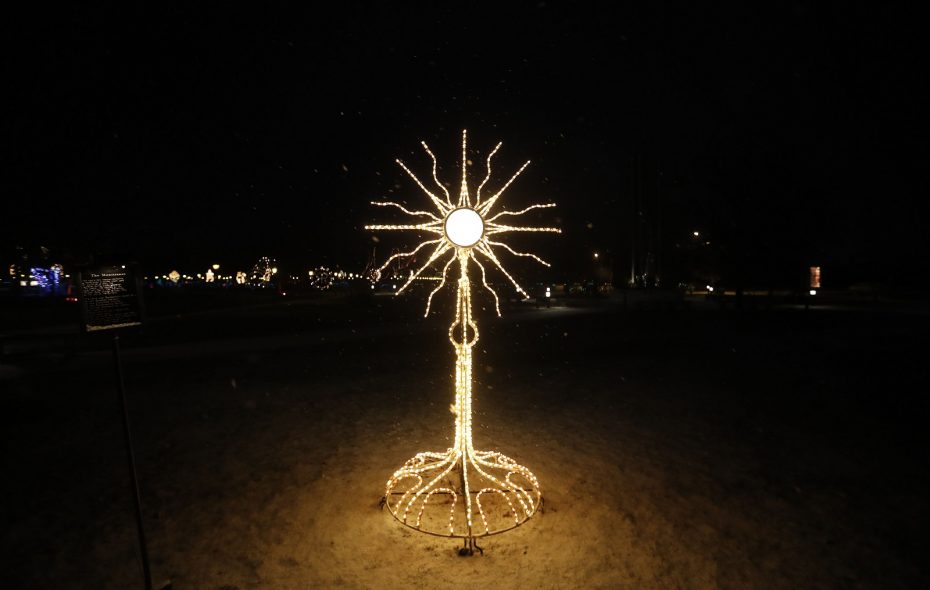 The Monstrance is a sacred vessel used by Catholics to show the Eucharist during public adoration is lit for the Festival of Lights at the National Shrine Basilica of Our Lady of Fatima. (Mark Mulville/Buffalo News)

"It feels peaceful," said one of them, Amber Dutton. "It feels as if everything in your head goes away. It makes you think of others instead of yourself."

She hadn't come here to be interviewed, and God love her for trying to describe the indescribable. I thought I could see what she meant. Atop the dome, looking down on this metropolis of light, you have the feeling you are right where you should be. Here, where all is calm.

And all is bright. 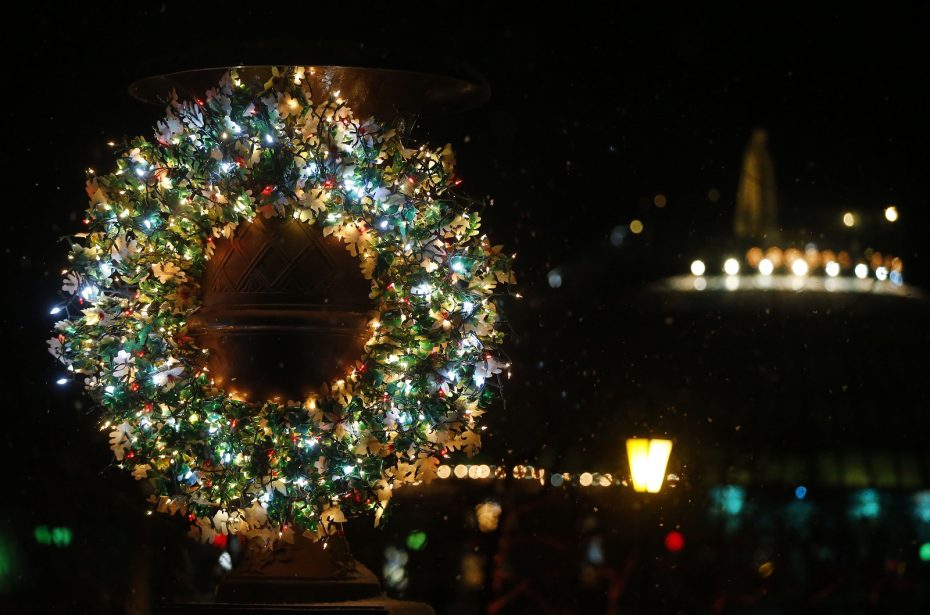 A lit wreath in the falling snow for the Festival of Lights at the National Shrine Basilica of Our Lady of Fatima. (Mark Mulville/Buffalo News)

100-Plus Things: The beauty of the Ellicott Square Building