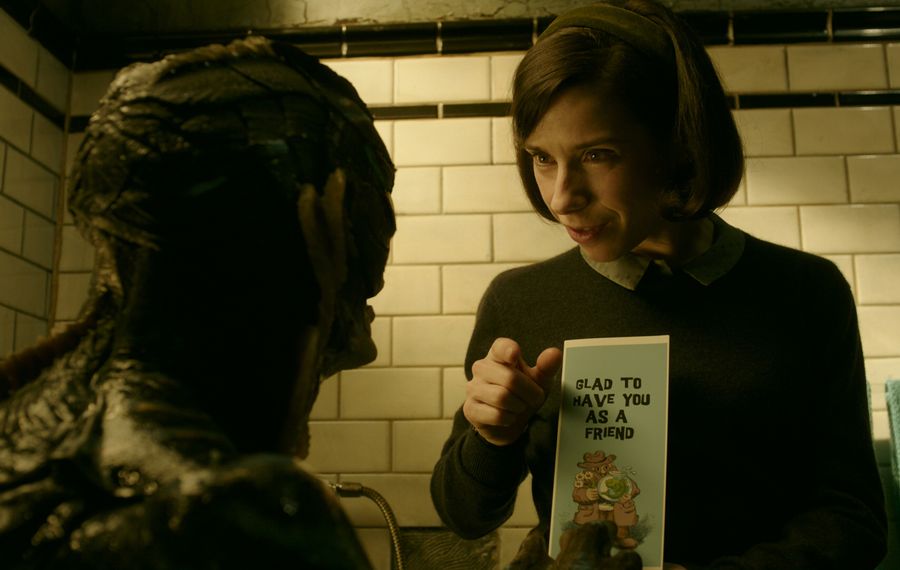 It was one of the secretly sublime moments in all of 1950s movies. The movie was Jack Arnold's 1954 monster classic "The Creature from The Black Lagoon," a B-movie in which only a fool could have predicted it would have a moment of the sublime. But there it was: in a scene upriver where the ugly Gill-Man has been hiding, the movie's beauteous, long-limbed star Julie Adams decides to have a consummately graceful afternoon swim.

What the camera shows us simultaneously underwater is the river's secret reptilian swimmer, lovingly duplicating in his monstrous way the movements of the woman above who doesn't know he's there.

The stunt man in the water sequences for the Gill-Man was Ricou Browning with an air tank inside his rubber suit. (Ben Chapman played the creature out of water).

The creature is obviously thunderstruck by the beauty of the human creature on top of the water. As we watch the two of them in the same immortal film shot, they do a kind of mirroring ballet  in the water to signify the monster's enchantment.

Fast forward 63 years to "The Shape of Water" where the wonderfully movie-besotted Mexican filmmaker Guillermo del Toro finally had the glorious chutzpah to imagine onscreen what Arnold could only suggest in 1954 - an actual love affair between the beauty and the beast.

There is, to be sure, nothing remotely new about the story of the beauty and the beast. The original fairy tale was published in 1740 by Gabrielle Suzanne de Villeneuve. Carefully note the author's gender. But such infatuations are common whether we're talking about women and beasts or men and mermaids. Nevertheless it took audacity and nerves of steel to go all the way with it, which is what del Toro does.

The great Mexican master is an easy filmmaker to love--a tireless imaginer who refuses to get hung up on the status of his projects. He's in, no matter what it is, if he likes it, whether it's a big, zillion-dollar sci-fi creature feature like "Pacific Rim" or a beautiful little art movie like "Pan's Labyrinth," or a terrific TV show for kids like "Trollhunters."

In "The Shape of Water," he gives us a screenful of people to be drawn to--a couple of lovable cleaning women at a secret government laboratory (Sally Hawkins as a mute and Octavia Spencer as her protector) and the great Richard Jenkins as a sensitive, sympathetic artist who lives next door to Hawkins. When we first see this movie's Gill-Man he's about as close to Arnold's creature in his 1954 classic as he could be without actually violating copyright law.

But the poor creature is trapped in a hugely dysfunctional '60s relationship with male brutality: his government keeper is played by the great Michael Shannon, the consummate villain and tortured soul of our current movies. He treats the amphibian government experiment wretchedly. Torture with a cattle prod is commonplace. In return, the creature returns the favor by biting off two of his keeper's less-used fingers.

And then, near the creature's tank, comes the lab's lovely and mute cleaning lady, who somehow gets it into her head that a violent, angry man/reptile could be mollified by a few hard-boiled eggs and some music played on a portable record player.

Which, of course, is instantly demonstrably true. And when her portable TV plays a film of Bill "Bojangles" Robinson dancing with Shirley Temple for their mutual trans-creature delight, the movie suddenly turns so sweetly and completely daft that no matter how peevish something else might make you, you may be ready to  forgive it everything.

Ahead is a bathtub assignation between the amphibian and the cleaning woman, climaxing a relationship where her close friends became witnesses and enablers. At that point, the audience is gliding into an area where romance, hilarity, sci-fi, film scholarship and horror are all holding hands in a circle and merrily playing ring around the rosie.

The late Arnold, along with Browning and Julie Adams (both of whom are still with us in advanced years), would have difficulty not being delighted by what their old '50s B-classic hath wrought.

"THE SHAPE OF WATER"

Three and a half out of four stars