Jim Julian wrote the note after reading Wednesday's paper. He saw my column about the Electric Tower, a piece explaining how the owner, Paul Iskalo, just invested $100,000 in a new LED exterior lighting system for the downtown Buffalo landmark.

The column explained how the building went up in 1912 as a kind of commercial temple of electricity, how the original lighting system was designed by W. D'Arcy Ryan — considered an international illumination genius — and how the new system allows the building to retain its unique civic stature at the yuletide.

In Buffalo,  it is a symbol of Christmas.

Julian, 70, an investment counselor, said he enjoyed reading that chronology. Certainly, he agreed with the theme. To him, the Electric Tower – which he knew as a child as the Electric Building – was always the downtown centerpiece of the holidays. 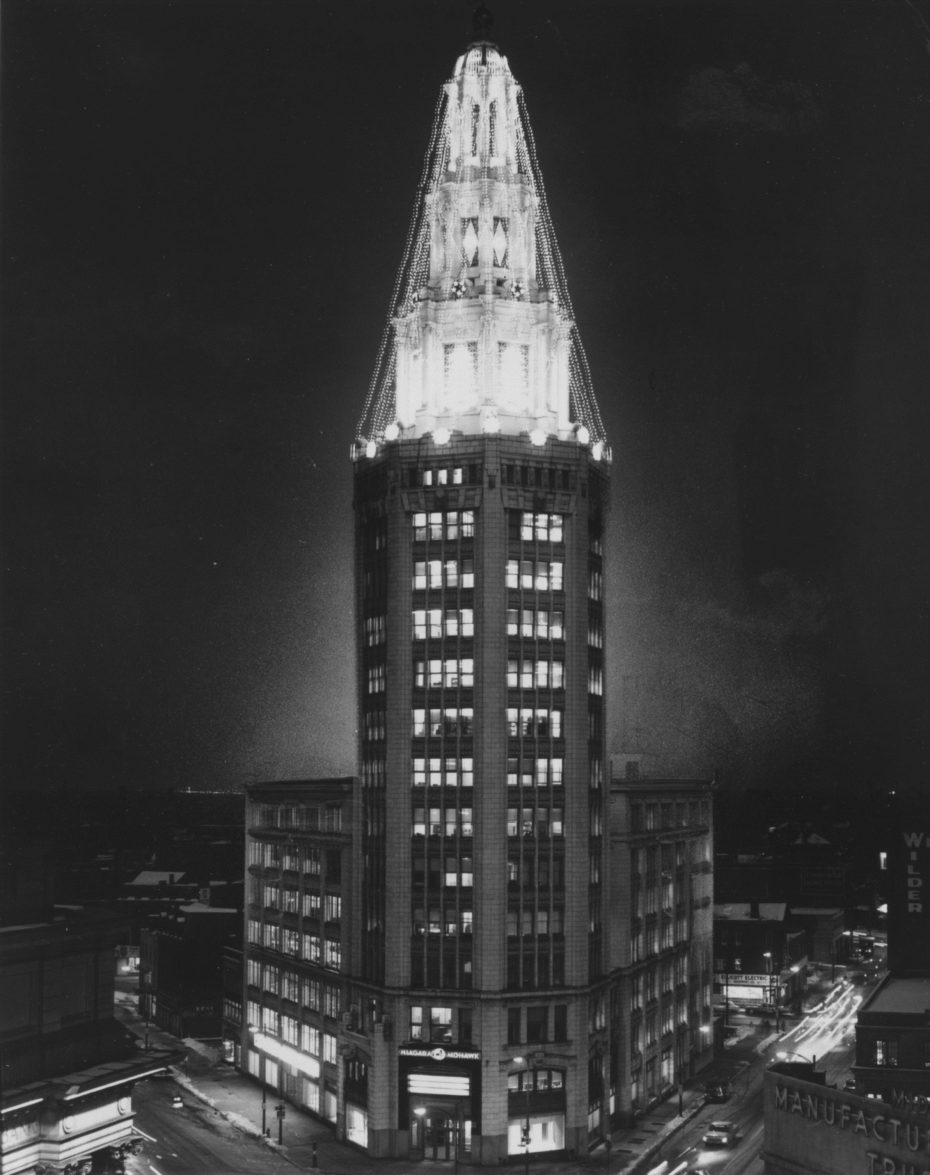 Another image of the Electric Tower, more than 60 years ago, at Christmas. (Courtesy Buffalo History Museum)

Yet the column didn't mention the Christmas lighting as he specifically remembers it from the 1950s and early '60s, during that postwar time known as "The Baby Boom." Julian understands that era resonates with thousands upon thousands of graying Western New Yorkers, and he is sure they share his holiday image of the tower.

It began with a West Side childhood, where  Italian-American parents raised him.

"Believe me," he said, "Christmas there was huge."

Julian remembers how his paternal grandparents kept barrels of homemade wine in the basement, wine they especially enjoyed at the holidays. He remembers the "Feast of the Seven Fishes" on Christmas Eve, when everyone stuffed themselves until 9 p.m., until they quit eating and fasted for three hours so they could receive communion at midnight Mass at Holy Cross.

The church, he said, was utterly packed, with a choir singing carols in Italian. You stood for a long time, unless you arrived early.

Families spilled out and headed home around 2 a.m., a magical chance for children to stay up late. Julian said neighborhood mothers promptly fried up eggs and Italian sausage. People got busy eating one more time, early on Christmas morning.

"That went on the same way, in house after house, on the West Side," Julian said.

Christmas also meant regular visits to downtown, where his father was a loyal customer of a barber named Phil Cascio on West Genesee Street. Sometimes father and son would get a haircut and then journey to the Knights of Columbus on Delaware Avenue for a swim or a shower, or both.

"In those days," Julian said, "downtown at Christmas was just humming." 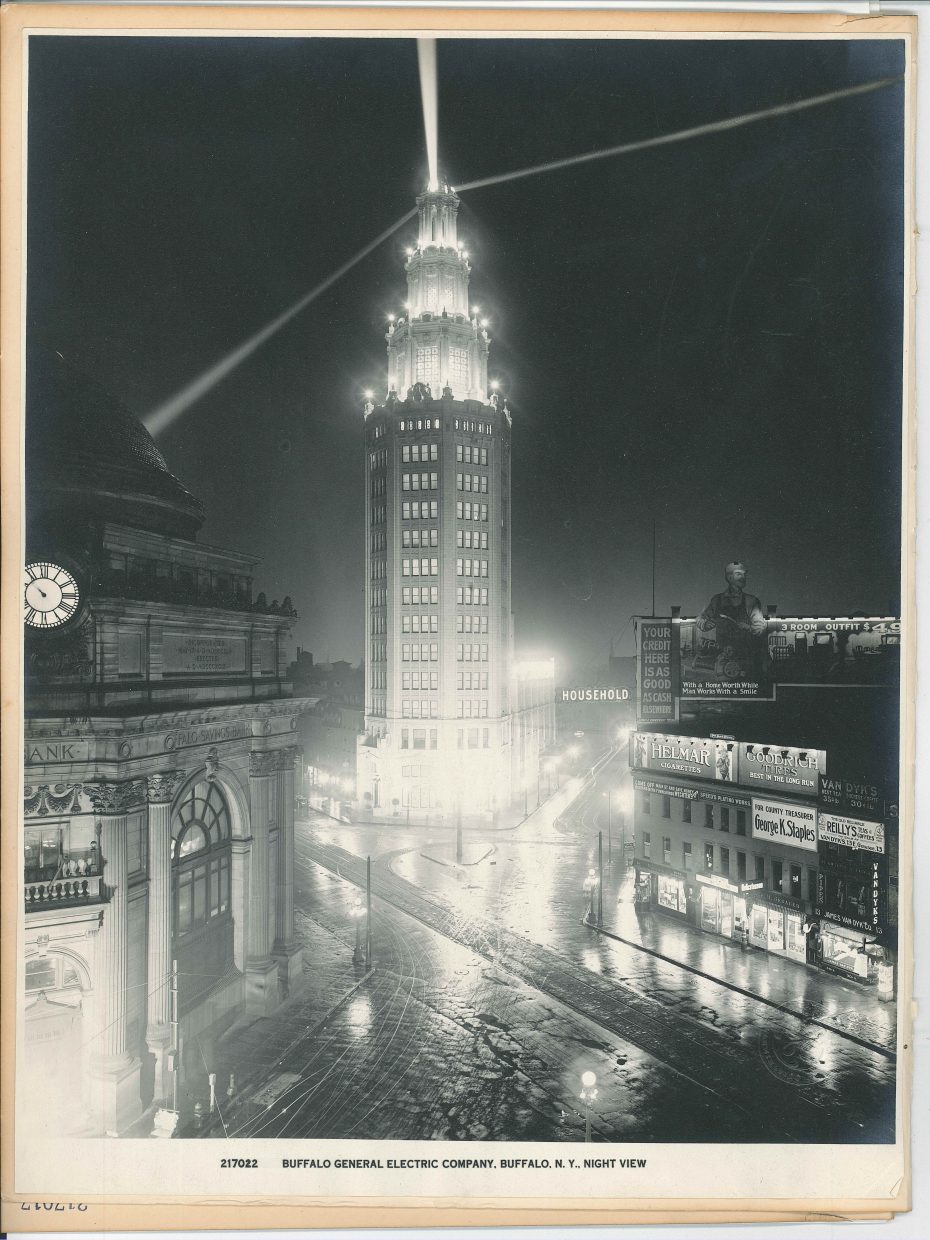 The Electric Tower, at its opening, 1912. (Image courtesy Museum of Innovation and Science, Schenectady)

His mother routinely handed him a $20 bill and sent him downtown to pay the telephone, gas and electricity bills. The last payment – the power bill - always took him to the Niagara Mohawk clerks, at a downstairs counter in the tower. The reward for accomplishing that chore was being allowed to keep whatever change was left over.

Julian would take it to a place called Mac Doel's at Main and Chippewa, where a kid could get a sundae, a sandwich or a soda.

As for Christmas, there was always a chance to see Santa Claus at the great department stores – for Julian, that was typically AM&A's or Hengerer's – and there were model trains rumbling around the grand interior of the Erie County Savings Bank. There were beautiful window displays along the sidewalks, he recalls, while snow fell past streetlights and thousands of people crowded the sidewalks, going from store to store or to the movies.

All that happened beneath the flashing lights of the Electric Tower.

Gloria Shepard, another caller, said her dad was part of the Niagara Mohawk crew that set up the lights. John Berney, born in Scotland, would climb ladders propped on overlooks on the exterior of the tower, more than 200 feet above the sidewalk. Berney worked for Willis Shoemaker, a supervisor he revered.

"He was 5-foot-5, and Mr. Shoemaker picked him because he was nimble," said Shepard, a retired schoolteacher.

She said the workers always waited for a calm day in November, but they often needed to go back up in snowy weather if any of the bulbs burned out over the holidays.

"My father used to talk about how scary it was," Shepard said, but he did it because of his respect for Shoemaker. Berney finally stopped, she said, when his knees went bad and he could no longer scale the ladder.

Even so, she still thinks about her father when she looks up at the tower.

Sean Kirst
'A Buffalo guy' lost to Covid-19: 'He deserved a better ending'
At ECMC, shaken doctor shares lessons from the 'Covid floor'
In time of Covid-19, cleaning people earn gratitude too long deferred
98-year-old, grandson lean on – and learn from – each other during trying times
More Stories

As for Julian, his dad was an engineer for 39 years at the old Worthington's company, until he had a heart attack at his desk and died at the hospital. Julian's mother worked part-time, on Saturdays, at Berger's department store. On weekend afternoons, the son would jump into the car with the father. They'd park downtown and wait until Jennie Julian got out of work, around 5:30 p.m.

By that time, it was dark. The moments in the car remain vivid in memory. The child could admire the Electric Tower, in all its glory, at peak rising 294 feet above the street.

The lighting display, he said, was different than the one we see today.

"I was just fascinated by the cascading stars," Julian said. "The top of that building is like a wedding cake, and each of the tiers of the cake were a different color — red, white and green. There'd be chains of lights from the bottom to the top, and there'd be stars and bells that would rock back and forth, and each cycle would last a minute, maybe 75 seconds."

He'd watch all that while seated in the car with his father, part of a familiar family routine. Julian knew his mother would walk outside in a few moments. He remembers the sense of absolute love, of warmth and security, as those lights put on a dazzling show, above the city.

Sixty years later, he can close his eyes and feel the moment.

It was Buffalo. It was downtown.

Beyond all else, it was Christmas.

Sean Kirst is a columnist with The Buffalo News who'd like to hear your memories of downtown Buffalo at the yuletide. Email Kirst at skirst@buffnews.com or leave a comment below.