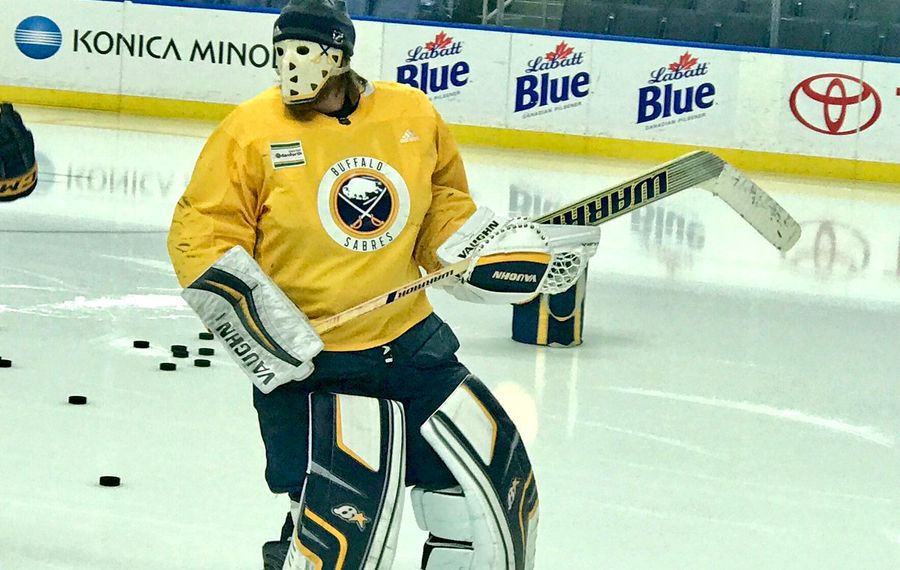 Just before practice started Thursday in KeyBank Center, Robin Lehner looked like something from the "Friday the 13th" series. He had on an old fiberglass mask worn by former NHL goalie Paul Harrison with the Toronto Maple Leafs in the late 70s and for six games during the 1981-82 season with the Sabres. Lehner was apparently pondering it for the Winter Classic and let goalie coach Andrew Allen take some shots on him.

It only took a couple shots for Lehner to get Allen to lob one up high. Experiment over.

"It was an old Buffalo mask. I tried it on and I have a lot of respect for them," Lehner said sheepishly. "I took one off the dome and it felt pretty good. We'll see if we can beef it up."

Lehner said he might consider wearing the mask for warmups when the Sabres and Rangers play Jan. 1 in Citi Field but it seems unlikely it would be his game gear. Lehner spent the rest of practice with a new design by Swedish mask maven Dave Gunnarsson and it featured the new secondary charging Buffalo logo created for the game plus tributes to Dominik Hasek.

"It turned out fine," Lehner said as he displayed it to reporters at his locker. "There's a nice look to it. Couple of Dominik Haseks on it both sides. I tell Dave what I want and he's a pretty creative guy who does what he wants." 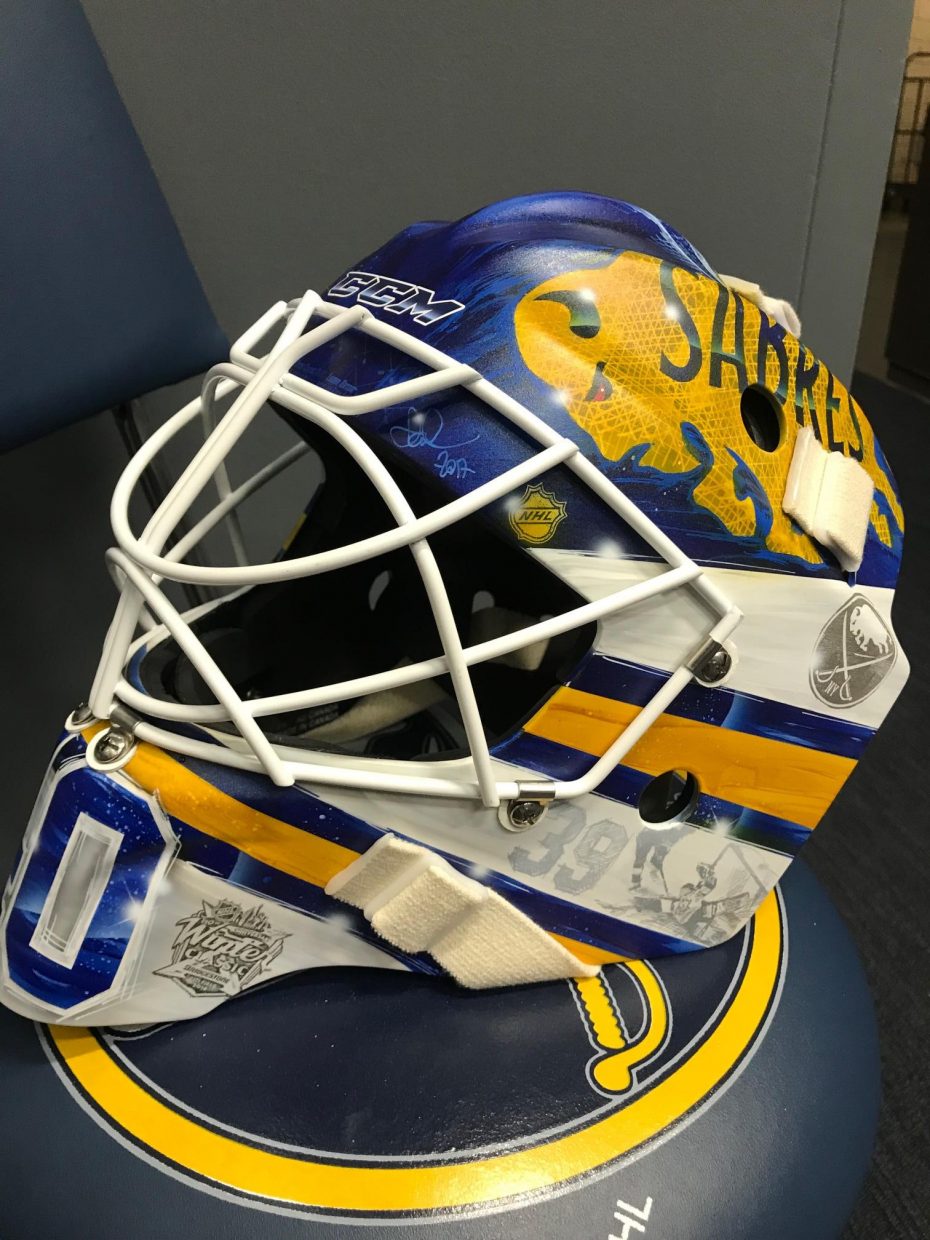 Lehner said he had not seen the new goalie pads unveiled Wednesday on Instagram by Rangers counterpart Henrik Lundqvist and that he may not have any new pads in the works.

"I'm deliberating on a few options," he said. "And we'll see what happens."

All the equipment talk shows how players can bring more personality to the outdoor game and get away from the monotony of just another regular season contest.

"We all look forward to it," Lehner said. "It's going to be a helluva experience, something we're
all going to remember for a while."

Lundqvist will be wearing pads that are a tribute to New York City and the Mets for the game. The "NY" logo the Rangers will wear on their jerseys dominates the pads, as it's set atop a bridge to honor what connects all the city's boroughs. The background is the Mets' famous skyline logo with the stitches of a baseball.

"Obviously we're there as guests," Lundqvist told New York reporters. "So it feels good to kind of pay the respect a bit and appreciate that we get this opportunity to play in their home field.

Lundqvist used pinstripe pads to pay homage to the Yankees when the Rangers played a pair of games in Yankee Stadium in 2014.

Coach Phil Housley said the Sabres were happy to provide Alexander Nylander a chance to leave Rochester and play for Sweden in next week's World Junior Championships here.

"All our prospects that are going to be able to go play this tournament, it gives them a chance to represent their country and get back with teammates they've played with before and are familiar with," Housley said. "We want to have him succeed. You can get a good boost of confidence if your country does well and that's what we're looking for from him: To continue to develop his game."

Nylander tied for the scoring lead in last year's tournament in Toronto and Montreal with 12 points in seven games and was named to the tourney's all-star team. Sweden lost to Russia, 2-1, in the bronze medal game. He finished sixth in scoring in the 2016 event in Finland with nine points.

The five players who were ahead of Nylander in 2016 have all become NHL regulars: They were the Finnish trio of Jesse Puljujarvi (Edmonton), Sebastian Aho (Carolina) and Patrik Laine (Winnipeg), and the American duo of Auston Matthews (Toronto) and Matthew Tkachuk (Calgary).

The NBC Sports Network "Road to the Winter Classic" crew was at practice again Thursday, scouring the locker room for thoughts on Lehner from players. Longtime assistant equipment manager and dressing room cut-up George Babcock also spoke about the goalie in rapid-fire fashion as he climbed Lehner's stall to rearrange the masks and gloves on the shelves.

Housley, who has been featured prominently in the first two episodes, said he watched the series premiere last week but had not yet caught the second installment. That one included his quick but sharp words to his team in the dressing room during and after last week's losses to Philadelphia and Carolina, as well as time at home in his Buffalo condo with his wife, Karin, discussing her bid for the vacant U.S. Senate seat in Minnesota.

"They do such a terrific job in editing and putting that together," Housley said of the show's traveling crew. "You have to thank the NHL and NBC for doing a great job and making me look good."

Philadelphia's Jakub Voracek entered Thursday's play leading the NHL in assists (34) and was tied for third in points (42) with John Tavares and Josh Bailey of the New York Islanders. The Flyers are 7-1 in their last eight games after snapping a 10-game losing streak that saw them go 0-5-5.