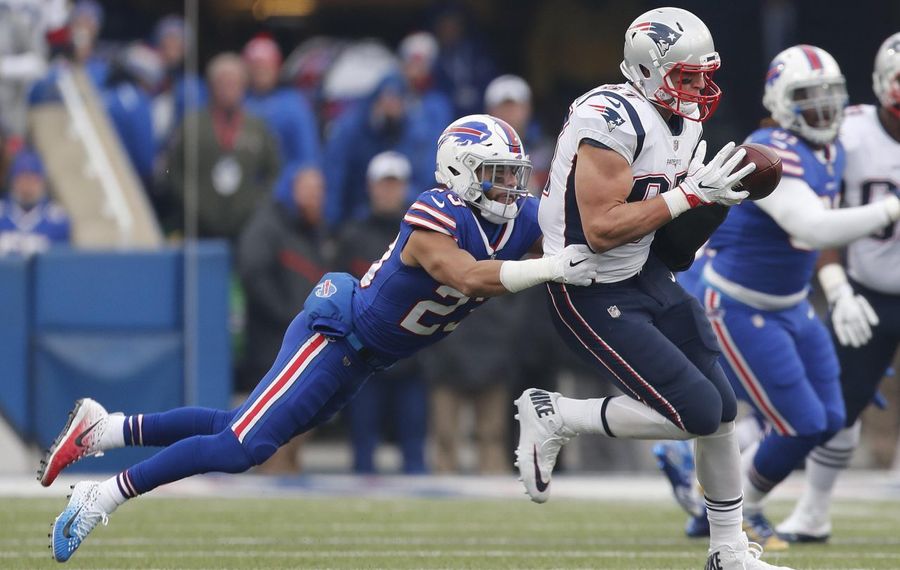 When the Bills run: LeSean McCoy’s career milestone of reaching 10,000 yards last week masked what was an otherwise tough day. He was held to 50 yards on 20 carries against the Dolphins. The Bills are still having too many negative plays in the run game, with 26 percent of their attempts being stopped at or behind the line of scrimmage. That ranks 29th in the NFL, according to Football Outsiders. Mike Tolbert, who was a healthy inactive last week, was named a third alternate to the Pro Bowl this week. (Enter confused-face emoji here.) The Patriots have given up 263 yards on the ground the last two weeks, with Miami’s Kenyan Drake and Pittsburgh’s Le’Veon Bell doing most of that damage. New England allows a shade more than 5 yards per carry on first down and overall is 26th against the rush, allowing 122.3 yards per game. Their six rushing touchdowns allowed is tied for second fewest in the NFL, behind only Jacksonville’s five. EDGE: Bills.

When the Bills throw: Tyrod Taylor’s last time out against the Patriots was rough, as he went 9 of 18 for 65 yards and one interception before leaving the game with a knee injury in the fourth quarter. His 35.6 passer rating was the second lowest in a game he’s started in his career. Taylor’s first half last week against Miami was his peak as a quarterback. He led three touchdown drives of 75-plus yards and was totally in command. When the Dolphins brought more pressure in the second half, though, the offense didn’t respond. Taylor is still targeting his running backs and tight ends more than his receivers in the passing game – it was 19 to 9 in that regard against the Dolphins. With Kelvin Benjamin struggling through a knee injury, the Bills need Zay Jones to re-emerge. He’s been held without a catch the last two weeks. Old friend Stephon Gilmore gave up a 39-yard catch and a 4-yard touchdown last week to the Steelers’ Martavis Bryant. Cornerback Eric Rowe deflected Ben Roethlisberger’s pass at the goal line, allowing safety Duron Harmon to come away with the game-winning interception. EDGE: Patriots.

When the Patriots run: Ex-Bills running back Mike Gillislee should get back into the lineup for New England after Rex Burkhead suffered a knee injury in Week 14. Gillislee has been a healthy inactive for the Patriots’ last six games. Gillislee scored three touchdowns in the season opener, but saw his playing time take a dip when Dion Lewis returned. Offensive coordinator Josh McDaniels has run more plays with two running backs in recent weeks, including 10 last Sunday against Pittsburgh. New England is right smack in the middle of the league in rushing, ranking 16th at 110.6 yards per game. Football Outsiders’ offensive line rankings, however, are much more favorable, with the Patriots second overall in “adjusted line yards” at 4.95 per carry. That’s a formula that assigns responsibility to the offensive line based on the length of the carry. The Patriots gashed the Bills for 191 yards in their Week 13 win. EDGE: Patriots.

When the Patriots pass: Throw it to Rob Gronkowski. That’s a pretty simple formula for success for New England. Tom Brady did that on three straight plays against Pittsburgh, setting up the go-ahead touchdown. Gronkowski is a riddle no NFL team has an answer for. That included the Bills in Week 13, when he torched them in the second half for 119 receiving yards. One area of concern for the Patriots is how much Brady is getting hit. He’s been sacked 31 times this season, which is more than double all of last season (15). Left guard Joe Thuney in particular has really struggled in pass protection. EDGE: Patriots.

Special teams: The Patriots are great, as usual. Kicker Stephen Gostkowski missed an extra point last week, but that can be attributed to a bad snap. Matthew Slater, one of the best gunners in the NFL, is back in the lineup and expertly downed a punt at the Steelers’ 3-yard line last week. Gostkowski last week successfully kicked to the goal line, forcing Pittsburgh to bring the ball out, allowing New England’s coverage unit to make the tackle before the 25-yard line. That’s just another example of their impeccable attention to detail. The Bills similarly have been solid on special teams. In fact, it’s hard to remember their last big mistake. EDGE: Even.

Coaching: Sean McDermott has taken the right approach in regards to any retaliation against Rob Gronkowski. The Bills can’t risk a player doing something dumb and earning a suspension with a huge game against Miami looming in the season finale. For as big as this game is for the Bills, McDermott is right not to put too much into it. There have been times in the past where Buffalo is too keyed up to face the Patriots, and it leads to undisciplined play. Since 2001, when Brady became his starting quarterback, Bill Belichick is 41-11 following a loss. EDGE: Patriots.