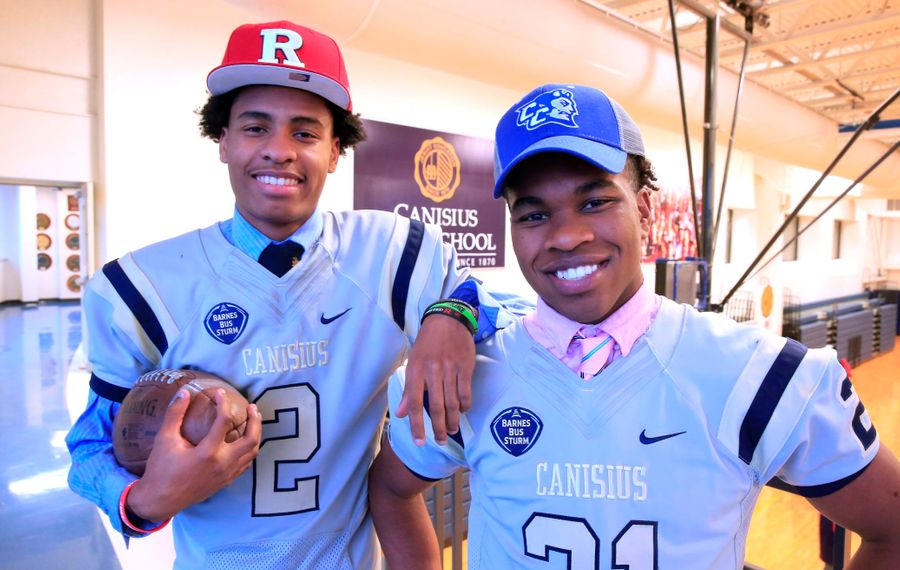 The hype surrounding college football’s signing period is no longer confined to February. The suspense now starts before Christmas even hits the calendar.

The Class of 2018 is the first to have the opportunity to use a 72-hour window beginning Wednesday to sign their National Letter of Intent or wait for the traditional signing period that starts the first Wednesday of February and runs until April 1. The early signing period – a staple for basketball recruiting and many other sports – was approved by the Collegiate Commissioners Association in May.

“I didn’t want there to be any miscommunication," said Woods, who verbally committed to the Big Ten school in July. “Not to say that I would have made a different choice if I had waited until February, but I wanted to show the coaches that I’m 100 percent committed to Rutgers.”

For McDuffie, signing early was a chance to show the UB coaches how dedicated he is to the program.

"I’m signing this week because I’m 100 percent committed to being at UB," McDuffie said. "It’s where I want to be and I want to make this official. This is a great idea to me. I think it’s something that should have been done a long time ago."

The reasoning behind the new signing period, according to the NCAA, is that most prospects are far enough along in the recruiting cycle by mid-December that they have made up their minds about which school they want to attend.

"It's relieving, definitely relieving knowing that everything's done with," Myers said Wednesday morning. "I can focus on high school, the rest of my senior year and I'm just excited to be a Bull next year."

College basketball has had two signing periods, an early date in November and another in April. Most commits use the former. The early signing period could become the new normal in football as well.

“I think it’s already going to have that sort of an impact,” 247Sports Director of Scouting Barton Simmons said. “Whether the country realizes it with this cycle, probably next year they’ll realize how impactful these days will be.

"The February signing day always will be important because five-star and top-100 type prospects have all the leverage and can hold out until the final day to bring that day some interest. The average recruit will lock it up in December.”

The recruiting system has its share of flaws, and this new signing period is no different. It comes with pros and cons for both the student-athletes and the schools involved.

So why would a recruit want to sign early?

“The biggest reason is because they risk losing a spot in the signing class if they don’t,” Simmons said. “That’s a leverage point colleges are going to use overwhelmingly. In most cases, if a kid doesn’t sign, that’s a clear statement to the school that they’re not a firm commit and that the school should pursue other prospects. That message is being conveyed to kids.”

Woods said he didn’t feel any pressure from the coaching staff at Rutgers to sign early. He talked it over with his parents and decided that it was the right choice to get everything rolling so that he could be settled by the time he arrives for camp in June.

Signing in the early period does not mean that a player is enrolling in college early. Also, the new signing period won’t affect players who decide to graduate early from high school and enroll in college for the January semester. Those players can still sign financial aid papers instead of a letter of intent, well before the February signing period, but they now get their own day in the spotlight.

Huston’s experience was the opposite of what one might expect.

“They didn’t approach me. I heard about it and thought I wanted to sign early,” Huston said. “I brought it up to them when I went on my official visit. I’m sure they would’ve asked me about it at some point, but they were excited I brought it to them.”

This, in turn, gives programs a higher level of certainty as to which prospects are committed. Coaches won’t have to monitor as many recruits until February or fear them flipping to a different school at the 11th hour.

“If a school like Buffalo has found a steal, a kid they think is a better player than they’re able to typically get, they had to hold their breath to February most years,” Simmons said. “This time of year, major programs aren’t doing the deep dive and seeking out sleeper prospects committed to the MAC. Now those schools have stolen that kid and kept them safe.”

Myers calls it icing on the cake after a historic state title and Connolly Cup honors. pic.twitter.com/USEs1Nwcch

It evens the playing field with the Alabamas and Ohio States of the college football world. Those schools have the cachet to poach late-rising recruits as February approaches.

UB lost five players in the last seven days two years ago to Power Five schools. That can’t happen with players who have already signed their NLI.

"Three of those guys committed as early as the summer," Bulls coach Lance Leipold said, "and we stopped recruiting, thinking we had a solid commitment, and then in the 11th hour you're left trying to figure things out."

Another change also benefits programs such as UB and Rutgers. Starting with the Class of 2019, schools can schedule expenses-paid official visits for rising seniors from April to June instead of waiting until Sept. 1.

Even though most recruits visit unofficially during their sophomore and junior years (Woods said he visited Rutgers five times before his official on the weekend of Dec. 9), it’ll allow schools in colder climates to show a different and warmer side of campus to families who may not have the means to make visits on their own dime.

“That’s a welcome addition for schools in tougher climates,” Simmons said. “They’ll really put a heavy emphasis on that early visit period. So many schools consider their class locked up right now. Their budgets are now focused on 2019 and 2020 kids and already laying groundwork for official visit dates. Now they’ll evaluate and offer earlier. It’s a vicious cycle that will accelerate the recruiting game.”

It should accelerate the pace for athletic directors and coaches filling staff vacancies as well, many of which occur in December and January. Even if head coaches are settled, there’s usually significant turnover of position coaches and coordinators who often are the coaches that players form stronger bonds with anyway.

“While kids certainly know about the possibility of instability when they sign with any school, they’re going to have to sign without a clear picture of who will be coaching them,” Simmons said. “This could definitely have an impact on the transfer market and create more volatility on that front. Feeling like you’ve been sold a bad bill of goods is a good way to initiate uncertainty and restlessness.”

“I thought that Rutgers, they’re a very young team and there’s a lot of young coaches,” said Woods, the 13th-ranked prospect in New York by ESPN. “Stuff like that is not only going to happen at Rutgers but everywhere you go.”

Recruits who haven’t made enough academic progress will not have the ability to sign in December and could see their spots go to less-talented players who do qualify. For schools like Stanford, with admissions standards higher than the NCAA minimum, those programs could hurt if prospects don’t want to wait to find out if they’ve been accepted.