Zach Bogosian misses old-time hockey. He got a chance to bring it back Tuesday.

The Buffalo Sabres defenseman saw teammate Jacob Josefson get crunched by Kevan Miller during the first period, so he skated toward the Boston defenseman. Miller is a believer in old-time hockey, too, and the fists were soon flying.

"I just saw one of my teammates get hit really hard," Bogosian said after the 3-0 loss to the Bruins. "It was a clean hit. I respect the way Miller plays. He plays the game hard, and I know he would probably do the same thing for his teammate if that was me.

"I just saw a big hit and a chance to try to rally the guys. Not a lot of it goes on anymore, but I don't think it should ever be out of the game. It's good for the game."

The Sabres certainly liked it. They stood at the KeyBank Center bench and tapped their sticks on the boards despite Miller earning the decision. Every one of them stood and tapped again when Bogosian exited the penalty box.

The hit and fight with just 4:48 gone set a physical tone. Buffalo finished with 25 hits, including six by defenseman Jake McCabe and four by forward Evander Kane.

"Those are fun games to be part of," Bogosian said. "We matched their physicality pretty good. We had a good pushback physically. I just don't think our execution was all that great, and that was the deciding factor."

Sabres right wing Sam Reinhart skated just 11:05, ahead of only the 10:25 for left wing Zemgus Girgensons. It was Reinhart's second-lowest ice time of the season. He skated 9:09 on Dec. 5 in Colorado.

Reinhart played just 2:11 in the third period as Buffalo tried to erase a 1-0 deficit.

"He's got to play with a little bit more speed and get to the tough areas and compete and battle," coach Phil Housley said. "Down below the dots in the offensive zone, he's really good. He protects the puck well. He's got to get to those areas a little quicker."

Reinhart has no goals and one assist in the past 12 games.

The uplifting moments worked both ways.

For the patients in Roswell Park Cancer Institute and their families, it was a chance to spend time with athletes they watch on television. For the Sabres, it was an opportunity to see the fighting spirit of sick children, meet adults going through tough times and shake the hands of selfless caregivers.

The Sabres' holiday hospital visit always lifts spirits, and this one was no different.

"It's great to just go over there and obviously see the kids and just have fun," center Jack Eichel said. "That's what it's all about. It's just about enjoying time with them and trying to put a smile on some kids' faces – and not even just kids. Anybody who's there is not really in a good place and going through their own personal struggle and facing some obstacles.

"At a time like this right around the holiday, they want to be home with their family and enjoying time with people. You never want to be in that position, so it's good for us to just go over there, see some people and just enjoy our afternoon with them."

The smiles showed there was plenty of enjoyment to go around. Clad in blue and gold Santa hats, the players visited patients' rooms, checked out their drawings and held a party for the kids.

Both sides embraced the break from the daily routine. Faces are long in the arena because of an 8-19-7 start. That misery is minuscule compared to fighting cancer.

"It kind of puts life in perspective," McCabe said. "We've obviously had a tough year here, but you go through something like that and it's pretty easy to see the positivity in hockey and how lucky we are to play this game for a living." 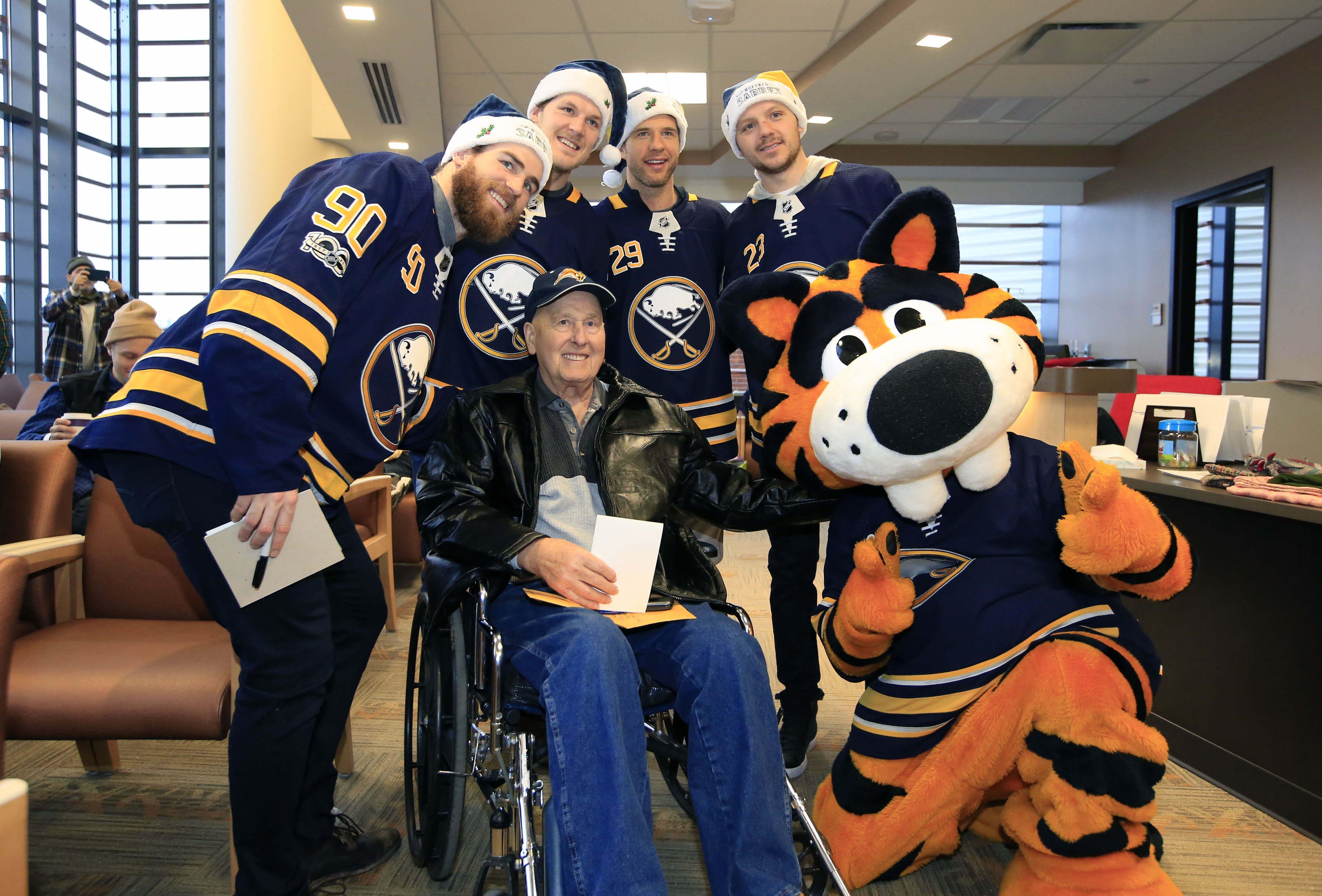 While playing in Montreal, defenseman Nathan Beaulieu visited the local children's hospital. This was his first team visit to Roswell Park, and he was struck by the passion of the workers.

"People kind of forget about all the people who spend their life basically working to take care of these people," Beaulieu said. "It's pretty special. It's amazing what they do."

The Sabres spent time with everyone from age 2 to 82, but as usual the kids were a top highlight.

"Something with kids really hits home," Beaulieu said. "They never really get a chance. It's always humbling and heartfelt."

The Winter Classic will have a patriotic intermission.

USA Hockey will announce its 2018 Olympic and Paralympic teams during the second intermission of the New Year's Day game. The organization and NBC Sports figure viewership will be high for the meeting between the Buffalo Sabres and New York Rangers, so it will serve as a lead-in to the Olympics, which also will be televised by NBC.

USA Hockey will have players from the men's, women's and sled hockey teams in attendance. Former Sabres captain Brian Gionta is a lock for the men's team, which may also include Western New York goaltenders David Leggio and Parker Gahagen.