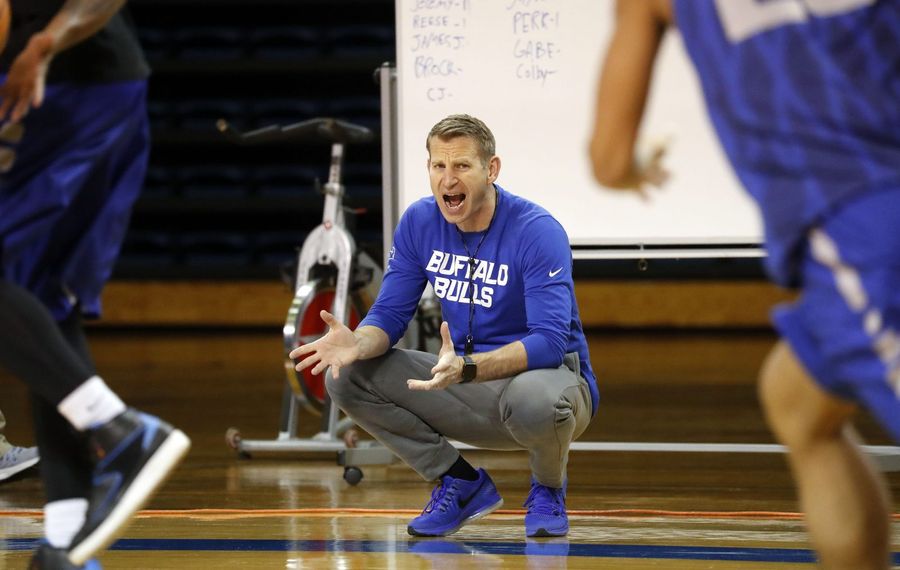 SYRACUSE – Nate Oats delivered the news to his players Tuesday on UB's ride to the afternoon shoot-around in the Carrier Dome. Senior Wes Clark finally met NCAA transfer requirements, ending a saga that made him a spectator for nearly two years before he started against Syracuse.

"Everybody on the bus cheered," Oats said with a laugh. "Well, I don't know about the practice players."

UB made need a few games to adjust their roles with Clark in the lineup, but they're a tough, scrappier and more talented team with him. The Bulls threw a little scare into Syracuse but never completely overcame terrible shooting in the first half before the Orange pulled away for a 81-74 victory before 17,335 in the Dome.

The Bulls deserve credit. They refused to back down and gave Syracuse all they could handle. You could see Buffalo's confidence growing and its backbone stiffening while they chipped away at a nine-point lead in the second half. The same team that was frazzled in the first half had a 68-67 lead with 3:10 remaining.

Really, if there was anything shocking, it was UB having a chance to win after shooting so poorly early in the game. If the Bulls converted more from the field in the opening 20 minutes, they might have had a convincing win over Syracuse, an Atlantic Coast Conference power that had a 9-1 record.

UB had its chances. Perkins kept the Bulls in the game after Clark suffered a deep cut on his finger that temporarily forced him from with about six minutes left. He returned in time to feed CJ Massinburg for a dunk and make a steal and a layup to give UB a 68-67 lead with 3:10 remaining. An upset was brewing before UB missed five straight shots down the stretch and succumbed to a bigger, more talented team in Syracuse.

If the performance Tuesday was an indication of what's to come in the Mid-American Conference, look out for Buffalo. And now that they have Clark in the lineup, they should be even better.

Clark was entangled in NCAA bureaucracy after he transferred to UB but failed to sit out two semesters "in residence." Last year, he stayed home for the fall semester but enrolled in the spring. Therefore, he failed to meet transfer requirements until he completed the fall semester this year.

UB appealed the ruling on the grounds the senior guard he didn't enroll for financial reasons. UB didn't have any scholarship money available for him in Fall 2016 before Oats gave him a full ride in the spring. He spent the previous semester taking out his frustration on his teammates during scrimmages in practice.

Finally, he was cleared for takeoff Tuesday afternoon after his grades were recorded for three classes. Clark missed practice Monday while addressing academic issues, was not allowed to travel with the Bulls to Syracuse and hitched a ride with Myron Gray, the director of player development, hours before tipoff.

You think he was ready?

Clark finished with 15 points and six assists in his first game in 22 months. Perkins had a team-high 18 points and seven rebounds in one of his more impressive performances this season.

Buffalo was hailed as a favorite to win the Mid-American Conference without Clark. The Bulls figure to be considerably better with him. Some believe he'll be one of the top players in the conference best player. The 6-foot, 180-pound point guard was a fierce defender at Missouri and carried the same competitiveness into UB's workouts.

Clark's last game was Feb. 13, 2016, when he scored four points and grabbed five rebounds for Missouri in a win over Tennessee. Oats, who coached Clark at prep superpower Romulus High in Detroit, couldn't resist the temptation to start him against the Orange. Oats knew more than anyone that he would inject some toughness into the Bulls while they attempted to take down a team from the Atlantic Coast Conference.

Clark made three of his first four shots from long range and had 11 points in the first half. Imagine what he can do once he's in top physical condition. UB looked out of sorts with him running the offense at times, but they also struggled while trying to break down Syracuse's famed zone-matchup defense. SU had distinct advantages in terms of talent and length, and it made a difference. Syracuse's physical superiority led to numerous easy buckets.

Bulls' leading scorer C.J. Massinburg had a difficult time getting into rhythm in part because the Orange were so effective in defending the perimeter. He missed all five of his attempts in the first half. Buffalo missed 18 of their first 25 field-goal attempts overall and was fortunate to be trailing, 36-27, at halftime.

Massinburg, Devonta Jordan and Jeremy Harris were a combined 0 for 11 from the floor in the first half. Massinburg, who was averaging 20 points going into the game, didn't make a field goal until he buried a three-pointer to bring UB within 50-47 with 11:22 remaining. Massinburg had 14 points on 2 of 12 shooting.

The game Tuesday night was the first between UB and Syracuse since the 2001-02. Buffalo figured to provide a challenge this year given its talent and depth. The Bulls are expected to contend for the conference title. Still, Syracuse couldn't have been overly concerned about UB, and it seemed a stretch to believe Jim Boeheim's staff reached deep into Missouri games for scouting material on Clark.

Oats had hoped to exploit soft spot in Syracuse's defense around the foul and line and both corners with the idea UB would shoot well from the outside. In order to get players open, however, he needed one of his guards to penetrate deep enough into the defense to get better spacing on the floor.

Adding the lightning-quick Clark to a team that can never play too fast was like attaching a power booster to a rocket launcher. If the Bulls were going down Tuesday, as many expected, they were determined to play on their teams. If they made more shots in the first half, they would have improved their chances.

Clark did his part.