Asked to explain why his family’s Alden farm is held in such high esteem, Ben Oles pulled a dozen carrots from the earth he tends with his father, Dan, and mother, Jane. As the carrots dangled from his hand like jewel-toned stalactites, he gestured to the dirt they collected.

“See how the soil clumps together? That’s stickiness, which is good,” he said. “It’s not falling apart and isn’t blowing away.”

“And all these little root hairs, they’re breathing with the soil,” he continued. “They’re taking in what the soil’s releasing, and they’re releasing things that are feeding the microbes. It’s a whole relationship.”

Relationships, he would eventually implicate, are the structure.

But first, that soil. While walking portions of the 120 acres the Oles family calls work and home, Ben explained its vitality. Healthy soil respires and grows, and ought to be nurtured, which is why the Oles meticulously manage their land according to holistic, biodynamic principles, he explained.

That entails using organic seeds as often as possible and relying on homemade compost as their sole fertilizer source. The Oles also avoid spraying chemicals of any kind, even those admissible under USDA organic standards. In lieu of synthetic interventions, they rely on crop rotation—the systematic, successive planting of different crops on a given plot of land—to optimize the soil’s nutrient composition and suppress soil-borne blight.

Fruits and vegetables deplete the soil of phosphorus, nitrogen, and other essential elements, to varying degrees. To compensate for that stress and maintain the soil’s fertility, the Oles blanket parcels of their land with restorative, nutrient-fixing cover crops like clover between harvests. In resting and recharging the soil, the Oles imbue it with life-giving properties.

From that reinvigorated soil springs produce that is not only more wholesome. It is also strikingly more delectable, with sweeter, cleaner flavor profiles on the whole. 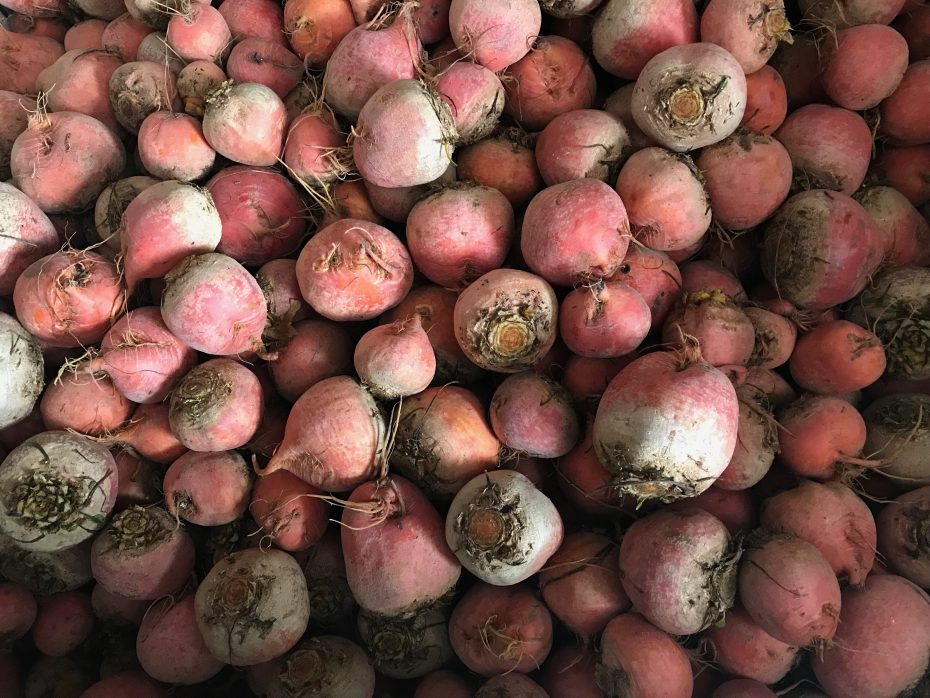 Golden beets, in cold storage at Oles Family Farm, will be part of winter CSA shares and restaurant orders. (Caitlin Hartney/Special to The News)

Ben concedes that his family’s adherence to organic practices comes with uncertainties. Despite their forethought and best efforts, a certain crop might not do well. But they accept those challenges as part of doing business with nature.

To mitigate the impact of crop failures, the Oles grow 40 vegetables and fruits over the course of a year. By diversifying their production, they aren’t reliant on one crop’s success, which affords them the peace of mind to work harmoniously with nature rather than battle against it.

In a sense, the Oles’ live in symbiosis with both their soil and nature itself.

Equally well tended are the Oles' relationships with local chefs. During the winter, 10 restaurants regularly purchase from them greenhouse and cold storage produce—things like spinach, rutabaga, celeriac, winter squash, beets, and garlic. In the summer, that number swells to 15 as a greater variety and volume of produce becomes available. 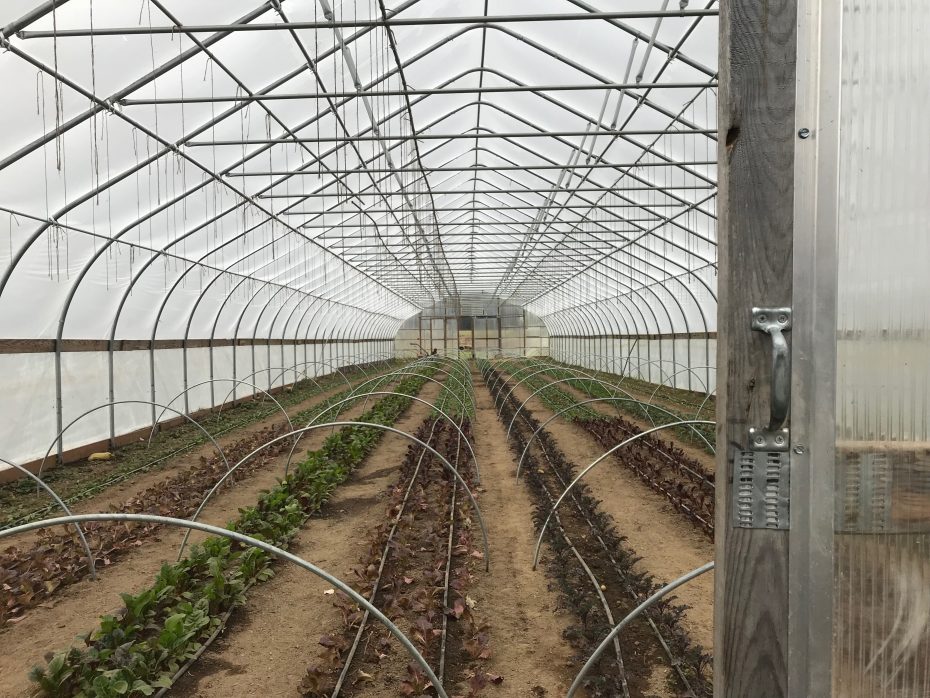 The greenhouse provides an extra layer of warmth, extending the Oles' growing season. (Caitlin Hartney / Special to The News)

From his days at Buffalo Proper to his current position working with Chef Jesse Ross at The Dapper Goose, Chef Edward Forster has been one of Oles’ most passionate supporters. His devotion grew from a place not only of deep respect for the family’s practices and the outstanding quality of their product but also from the rapport the Oles have cultivated with their customer base over the years. In each of the kitchens he has worked, Forster has thought of the family, and Dan in particular, as a partner.

Toutant chef-owner James Roberts is similarly enamored with the Oles' product, which he considers better than anything he can find commercially. “You can just tell that’s a super-powered carrot,” he gushed.

He also credits the Oles with pioneering an a la carte model of business. Before each delivery, Dan or Ben calls to discuss what’s available and in what quantities, which gives Toutant the opportunity to purchase exactly what it needs for that week’s service. Before Oles, Roberts was resigned to accept whatever a farm chose to distribute to him.

“That’s what really sets him ahead of the pack,” Roberts said. “He understands our trials and tribulations. Now the other farmers are starting to catch on.”

With that understanding comes loyalty. If you find yourself enjoying one of the thoughtfully composed vegetable dishes from Toutant's nightly features menu, there’s a good chance an Oles product made the plate. 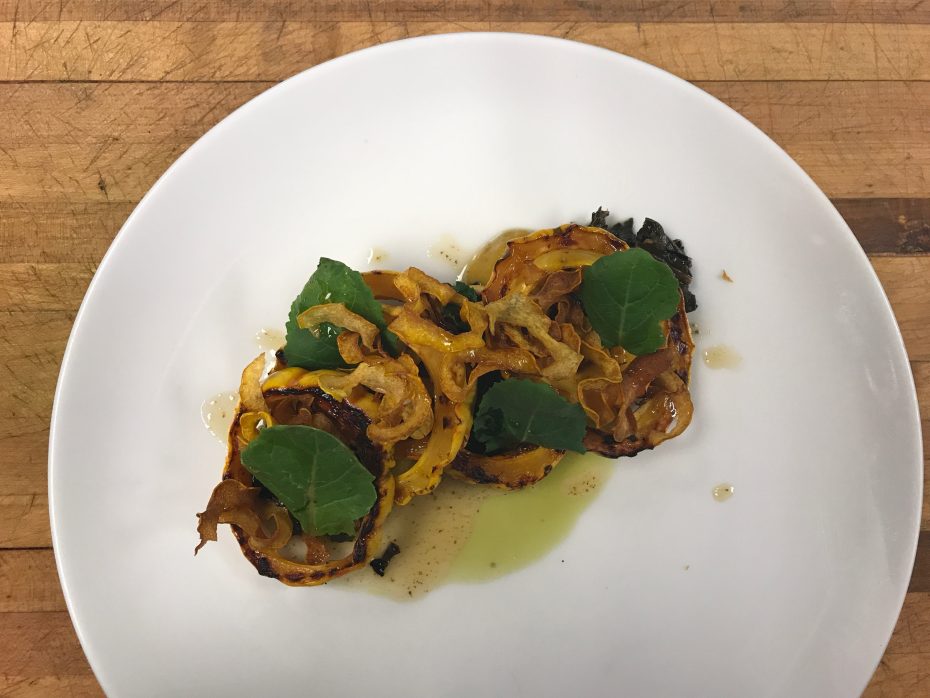 Charred rings of Oles Farm delicata squash rests atop a bed of Oles kale at Toutant in Buffalo. Chef de Cuisine Joseph Fenush accented the dish with a mustard greens, sauerkraut and honey that he fermented with Oles garlic and dried chilies. (Caitlin Hartney / Special to The News)

The advantages of those cooperative relationships go both ways. Preselling chefs at places like Lloyd, Marble + Rye, The Black Sheep, the Aroma Group, Amaretto Bistro, and Lombardo Ristorante enables the Oles to plant and pick only as much as they think they’ll need to fill demand.

As critical to the Oles livelihood is their relationships with the home cooks who participate in the farm’s Promised Land Community-Supported Agriculture (CSA) program. The CSA is a partnership that asks households to buy shares of the farm’s harvest. Summer members receive 25 weekly allotments of fresh produce. In the winter, there's 12 bi-weekly boxes. 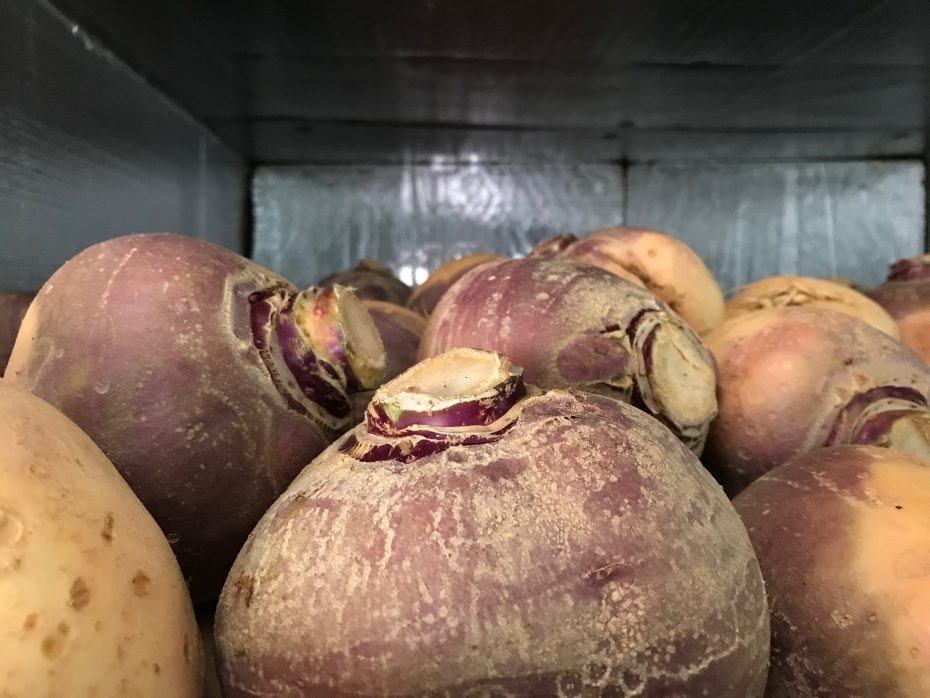 The CSA model ensures the Oles have a steady stream of income to support their family and operate their business. In turn, they nourish members' families and give them the added satisfaction of knowing  exactly where their food came from, when, and by what hands. That's a special sort of intimacy and trust.

Back on the farm, carrots in hand, Ben explained that at Oles, it's the roots that hold everything together, which is as true for relationships as it is for the soil.