M&T will likely maintain the steady approach Robert G. Wilmers ingrained in the bank, as the bank faces a future without him.

That was the view of some analysts following the death of the bank's longtime chairman and CEO on Saturday.

"I don't assume that there's going to be any major change or adjustment in their policies, given the fact the three vice chairmen have been there for some time," said Richard Bove, an analyst at Rafferty Capital. "The Wilmers approach has been a successful one."

Wilmers was known for cultivating M&T's leaders from within. He built a management team well-versed in his low-risk approach to banking. Its three vice chairmen all have been with M&T for at least 25 years, and sit on the bank's management committee, which meets weekly to set M&T's direction.

"We believe the company is still in good hands and that the conservative, efficient culture established by Wilmers over the years will persist," said Jim Sinegal, a senior equity analyst for Morningstar, in a research note.

Frank Schiraldi of Sandler O'Neill said he expected one of the three vice chairmen — Rene F. Jones, Richard S. Gold and Kevin J. Pearson — to ascend to CEO. Schiraldi, in a research note, said all three were longtime lieutenants of Wilmers "and we would not anticipate any meaningful change to the bank's strategy regardless of which becomes CEO." The trio continue to oversee the bank's day-to-day operations. 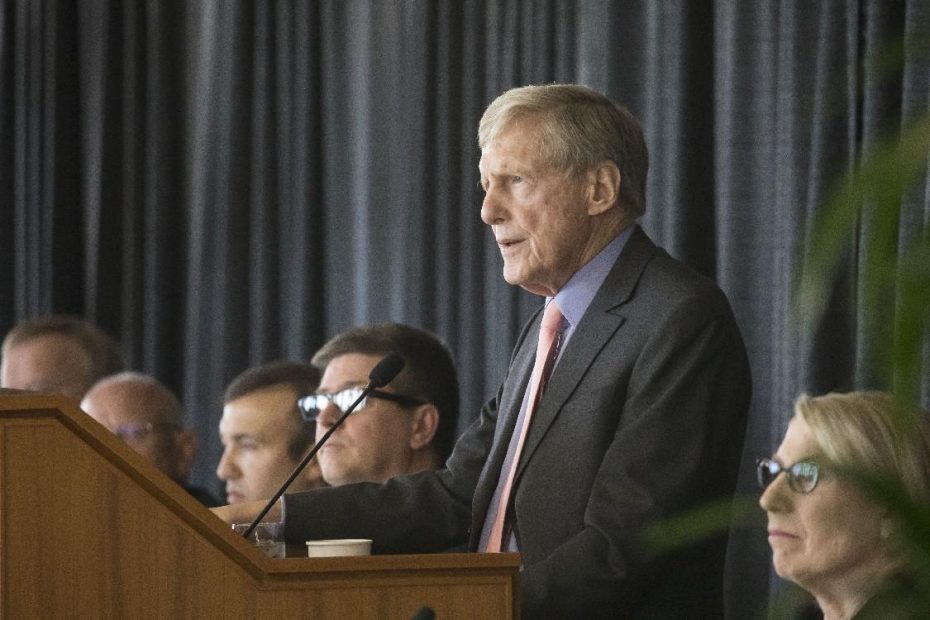 Schiraldi said a separate issue for M&T investors is the potential for share sales. He noted that Wilmers owned just under 4 percent of the company, according to SNL Financial data. Schiraldi said he didn't have insight into how his estate would transfer those shares, either directly or into a trust to benefit his heirs.

"Warren Buffett has said he will be an owner of M&T as long as Wilmers is at the helm," he wrote. "This soundbite may make some worry about a reduction in these holdings over time.

"We think it is important to note that Buffett has met often with all three likely successors who have made the trip with Wilmers out to Omaha on an annual basis to meet with the investor," he wrote.

M&T on Tuesday offered no additional details on a succession plan. Robert T. Brady was named non-executive board chairman following Wilmers' death. M&T has operated without a president since Mark J. Czarnecki died in February; his duties were divided among the three vice chairmen.

M&T earlier this year received the green light to return to making deals. The Buffalo-based bank had been on the sidelines until regulators approved the bank's upgrades to its anti-money laundering and Bank Secrecy Act programs.

"If you were trying to think about what would be their next step, I think it would be acquisitions," Bove said. "Basically, that's how they built the company." Bove said such deals would most likely occur in New Jersey or in markets that would extend the bank's existing footprint.

And while Wilmers was clearly the face of M&T in the Buffalo Niagara region, Bove said that wasn't necessarily the case for investors. To them, Jones filled that role for more than a decade while he served as chief financial officer. He explained M&T's financial results on conference calls and answered questions from investors.

"I just can't imagine there is going to be any significant change inside that company as a result of (Wilmers') passing, because I do think the day-to-day operation of the company was not being done by Bob Wilmers," but instead by his executive team, Bove said.

David Robinson: To WNY, Bob Wilmers was much more than a banker

While Wilmers' approach paved the way for continuity in M&T's leadership and management style, another staple of his tenure as CEO will be more difficult to replace: his annual message to shareholders.

Bank CEOs typically use their annual message to highlight achievements of the past year and mention upcoming changes, while avoiding controversy. Wilmers frequently made news with his report, taking aim at what he considered burdensome regulations, or making pointed commentaries about government and education. He wasn't afraid to issue criticisms when he felt they were warranted.

"I think his railing against government interference in the business was exactly correct," Bove said. "There were very few people left that have the stature to do what he did."

Other regional bank executives shied away from that type of criticism, fearing retaliation against their businesses, he said.

End of an era: M&T's Robert Wilmers, force in community, dies at 83