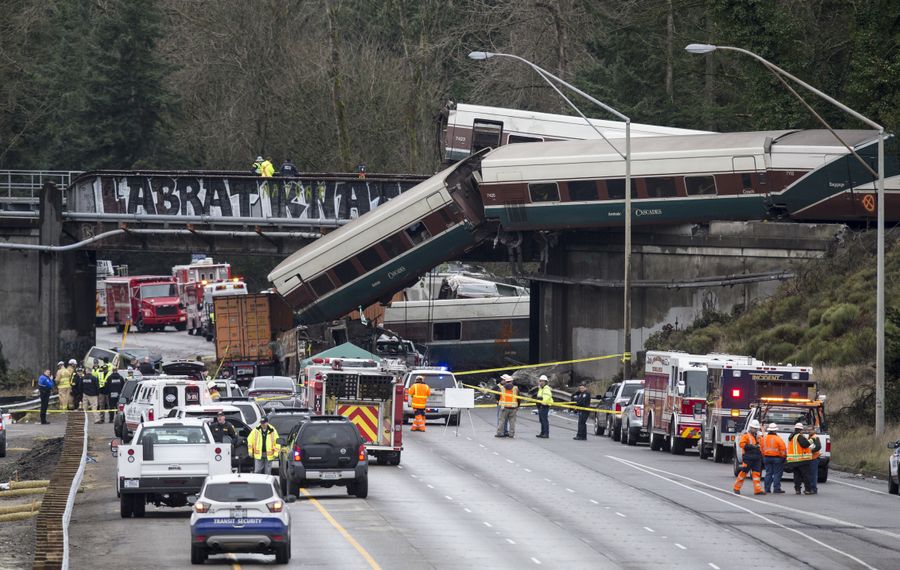 The revelation that a passenger train was speeding 50 mph over the speed limit at the time of a fatal crash near Tacoma, Wash., has once again focused attention on Amtrak’s safety culture, the role of human error in rail accidents, and the need for technology that automatically slows trains that are going too fast.

Late Monday, National Transportation Safety Board officials said that the train, bound from Seattle to Portland, was traveling at 80 mph, on a stretch of track with a limit of 30 mph, when it jumped the tracks and careened into a busy highway and a stand of evergreens. At least three people were killed and about 100 were injured, officials said.

James Hamre, a retired engineer who was a volunteer for All Aboard Washington, a rail advocacy organization, was among the dead, said his brother, Michael Hamre.

The accident mirrored Amtrak’s worst disaster in recent years, in 2015, when a train derailed at more than 100 mph in Philadelphia, on a curve posted at 50 mph, killing eight people.

Train 501, carrying 77 passengers and seven crew members, derailed Monday morning on the inaugural run of a new route for Amtrak’s Cascades service. It was not clear how familiar the engineer was with that stretch of track, or whether that played a role in the crash.

Federal law requires railroads, by the end of 2018, to have positive train control, which automatically slows trains if they are exceeding speed limits or approaching dangerous conditions. In its latest progress report to the railroad administration, Amtrak said it had installed positive train control on all 603 miles of track on the Northeast Corridor, from Washington to Boston.

Congress passed the law requiring positive train control in 2008, after the head-on collision of a commuter train and a freight train in Los Angeles killed 25 people. Railroads were supposed to have the system in place by 2015, but after it became clear that many of them would not meet that deadline, Congress extended it by three years.

The Washington State Department of Transportation has said that the entire Cascades route will have the system by mid-2018, but it was not clear whether it was in operation on Monday on any part of the line.

The tracks where the accident occurred were brand new and the result of a recent infrastructure investment program.

Backed by the state of Washington, Sound Transit, the regional transit agency, used $180 million from the 2009 federal stimulus package to buy an old 14.5-mile stretch of track and upgrade it for faster passenger service. The project, known as the Point Defiance Bypass, was devised to allow Cascades trains to stop using a more roundabout route that they shared with freight trains, making for faster, more reliable travel.

The state also spent $58 million from the stimulus bill on eight new locomotives, specifically for that service. The Cascades service embodies the complex, overlapping responsibilities on many of the nation’s rail lines. Officials said the service was owned by the states of Washington and Oregon and operated by Amtrak, whereas the Point Defiance Bypass track is owned by Sound Transit and dispatched by BNSF, the freight company that used to own the line.