Imagine: It’s the mid-1930s in Buffalo. You need to get across town, and you don’t have a car — but that’s no big deal. The city’s expansive electric streetcar system would be able to get you nearly anywhere.

A map published in 1935 showing all the possible connections bears more of a resemblance to a New York City subway map than the current map of the Metro Rail, whose only line travels up and down Main Street.

Say you were in Riverside and needed to commute to the University at Buffalo’s Main Street campus. Streetcars along Tonawanda Street, Hertel Avenue and Main Street would get you there.

What if you were in South Buffalo and needed to get to the Central Terminal on the East Side? A streetcar on South Park Avenue or Seneca Street, and then another along Smith Street and Fillmore Avenue, would get you within a few blocks.

And included in the many streetcar services that took passengers downtown was a line that would shuttle commuters along Clinton and Eagle streets, from the West Seneca-Buffalo line in Kaisertown to where the Greyhound bus station is today.

A portion of the Buffalo streetcar map published in 1935.

A history of Buffalo’s streetcar system at the website Buffalo Architecture and History traces the city’s streetcar system back to 1860, when the first horse car line, dubbed the “Buffalo Street Railroad,” traveled from a dock at the Buffalo River northward to at least Edward Street and likely as far as the intersection of Main and Ferry streets.

Horse car lines were eventually added to Elmwood Avenue, Forest Avenue and Ferry Street, according to the website, and by 1891, the streetcar system had been converted to electric power.

A history published at the website Skyrise Cities notes that by 1920, Buffalo had more than 350 kilometers (or nearly 220 miles) of streetcar track.

But by 1950, as the city and the nation increasingly moved toward the automobile, Buffalo’s streetcar era was over – at least until the 1980s, when the Metro Rail opened.

Click here to view the full map via Wikimedia. 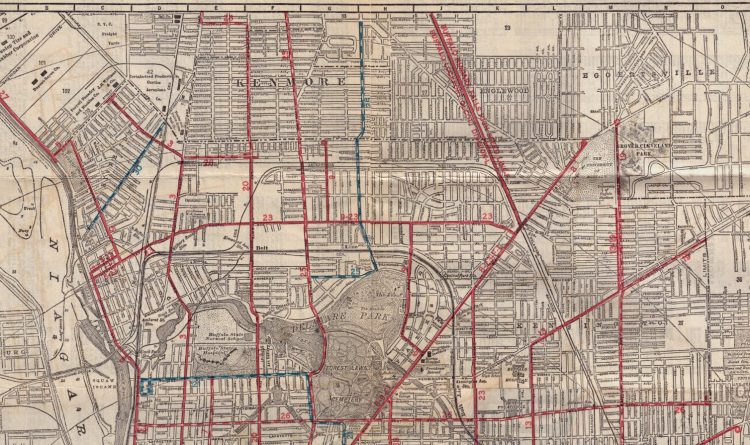 A portion of a Buffalo streetcar map published in 1935.