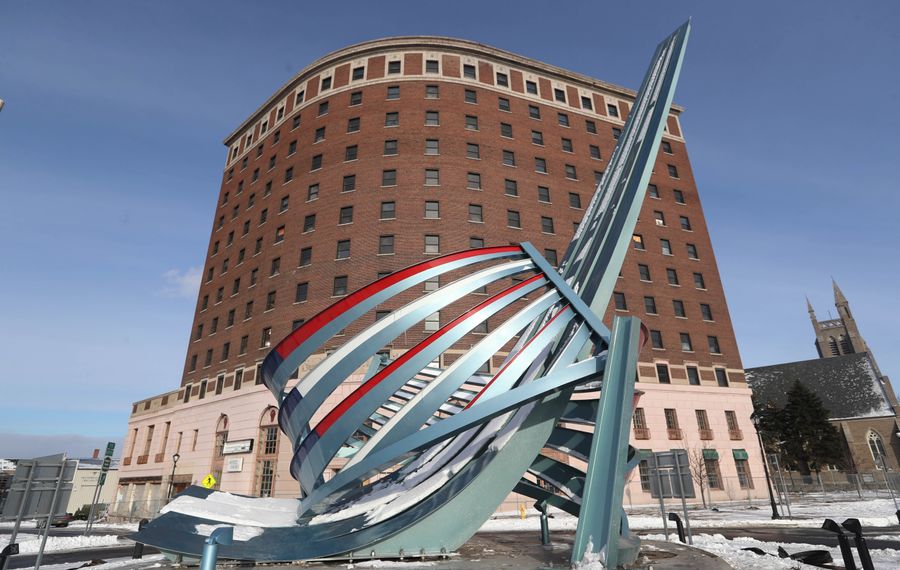 NIAGARA FALLS -- After eight years of planning, plenty of controversy and more than $600,000, Niagara Falls has installed its first major piece of public art in decades.

The piece – long delayed by planning, funding and installation issues – is meant to mark the 100th anniversary of the Boundary Waters Treaty between America and Canada in 2009. But it has been greeted with a mix of relief that it was finished, criticism of how it looks and skepticism over what it cost.

"The sculpture, it's beautiful, it's art. But the background just is fishy," said Jillian Holody, 23, a barista at Power City Eatery on Third Street and part of the city's burgeoning community of young activists. "It's great that it's representing the union between the two countries here, but we already have that. What are the people getting from it?"

The 6½-ton, 33-foot-tall sculpture of sweeping aluminum by Indianapolis-based artist Jeff Laramore towers over Centennial Circle in the commercial heart of the city. A spire of four thin metal sheets rising from the center of the sculpture, painted aquamarine to reflect the color of the Niagara River, is meant to suggest the cascading waters of Niagara Falls. At the sculpture’s base, two curved elements encircle Laramore’s abstract waterfall, representing human hands cradling the falls as well as the U.S. and Canadian flags. Its tentative title is “Untroubled Waters,” a description likely to irk those concerned about troubles this week with the city’s crumbling water mains.

By the time the landscaping around the sculpture is complete, it will have cost more than $600,000. The bulk of the money came from the Niagara River Greenway Fund. The final cost was much higher than the project’s original budget of $435,000 because a water main running underneath Centennial Circle had to be relocated at an additional cost of $190,000.

The city contributed about $84,000 in Seneca Nation casino revenues to the project, and USA Niagara Development chipped in $50,000. A committee chaired by Albright-Knox Art Gallery curator Aaron Ott selected Laramore’s proposal from a host of applications.

“We didn’t want a sculpture of two guys with beards and pens or something like that,” said Mayor Paul A. Dyster, who spearheaded the project. “We wanted this to be forward-looking, not backward-looking.”

Looking back in Niagara Falls is rarely a positive experience. Despite a development boom downtown that appears to be picking up steam, the city’s recent history is rife with examples of projects that fell victim to political shenanigans, funding troubles or unrealistic ambitions.

These range from the failed megamall of the late 1980s to a scuttled attempt to build a new aquarium on the site of the former Carborundum headquarters at the foot of the Rainbow Bridge and an as-yet-unrealized plan to bring a “daredevil adventure center” and 300-room hotel to the site of the former Rainbow Mall.

In that context, the completion of a major public art project such as “Untroubled Waters” has to count as a success. But concerns about its inflated price have renewed criticism of city government, which is facing a fiscal crisis brought on by a dispute between the Seneca Nation and New York State.

What’s more, the city has unveiled a sculpture called “Untroubled Waters” at a time city residents are troubled, to say the least, by a crumbling water infrastructure: A water main break recently forced the closure of Niagara Falls High School and caused patients on the upper floors of Niagara Falls Memorial Medical Center to be without water for showering or flushing toilets. And residents of 72nd Street are still reeling from a 2015 issue with frozen pipes that cut off water to more than 100 homes for weeks and forced residents from their homes.

For that reason, spending nearly $200,000 in public money to accommodate an art project is rubbing some people the wrong way.

“This money was just suddenly forked over,” Holody said. “If they want to spend money on painting the sidewalk and prettying the place up, by all means, do it, but the sculpture makes me question motives and wonder what’s actually going on behind closed doors.”

Dyster, for his part, said it was likely that the water main beneath Centennial Circle would have had to be relocated in any case to accommodate the planned renovation of the Hotel Niagara.
While the sculpture may have been reinforced to withstand 120 mph winds, withstanding criticism of its price tag is another matter. Republican politicians have criticized the project from the start, arguing against spending taxpayer dollars on art.

Even the city’s progressive residents are taking issue with the cost, given the fiscal challenges the city faces.

But considering the number of promised and proposed city projects that never came to fruition, one overriding response to the artwork seems to be relief that it was completed at all. William Dudek, a FedEx driver who has delivered packages in Niagara Falls for 27 years, gave voice to that idea by saying that “any improvement is a positive improvement.”

Dyster noted that most of the project’s funding came from Niagara River Greenway money that was specifically intended to cover beautification and public art.

He added that “Untroubled Waters” is the first of several planned public art projects that will fit into other downtown Niagara Falls development projects in the next few years. Planned pieces include a new abstract artwork on Old Falls Street, as well as a life-size bronze sculpture of abolitionist Harriet Tubman near the former U.S. Customhouse and another of Frederick Douglass near Main Street and Cleveland Avenue.

“Public art is explicitly referenced in the Greenway plan as something that contributes to the character of the Greenway,” Dyster said. “When you’re commemorating a historic event that was very important to the management of the resource, but also when you’re trying to influence the policy of the two countries to care for the resource going forward, that makes the artwork even more appropriate.”

The piece is widely seen as an improvement over what used to exist in the center of the roundabout – a pine tree that one Niagara Falls councilman referred to as “Charlie Brown’s Christmas tree.”

There is a surprising grace and a lightness to the sculpture when viewed from afar, which bodes well for its intended function as a beacon to draw visitors into downtown Niagara Falls. That effect is bound to be especially pronounced at night, when it will be illuminated by a circle of 14 LED floodlights.

Upon closer inspection, that grace gives way to something heavier. In practice, Laramore’s application of what he described as “automotive grade metal-flake paint” came out as a textureless green, more evocative of a pair of olive khakis than the surging waters of the Niagara. 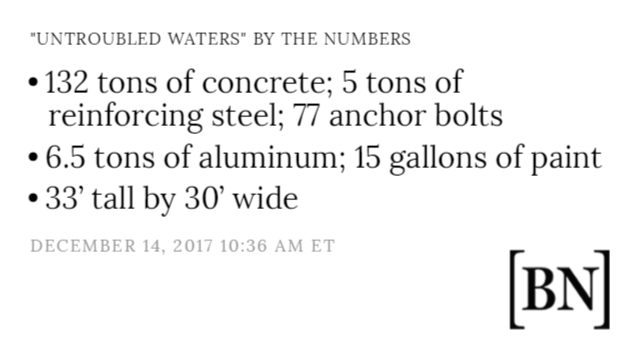 And while the river itself might be green-tinged, it becomes cloud-white when pouring over the edge – a majestic natural transformation that the sculpture does not reflect.
Since crews finished installing the sculpture Dec. 12 – some caulking and landscaping work around the foundation remains to be completed in the spring – reaction from Niagara Falls workers and residents has been mixed.

One critic said it evoked the imposing style of Soviet sculpture you might have found in Leningrad in the 1950s. Others described it as an elegant tribute to the falls and the binational relationship that protects the natural wonder.

“I think it fills the space,” James Mahoney, general manager of the Holiday Inn on Rainbow Boulevard, said in a noncommittal evaluation echoed by many in downtown Niagara Falls last month. “I don’t really care what’s there, but at least they’re doing something.”