An hour before the sun rose Saturday, 18-year-old Gerald R. Burkett II arrived to be the very first person in line to see the commissioning of new USS Little Rock.

Two hours later when the security checkpoints opened, a line of thousands snaked its way along Marine Drive and neighboring streets  to enter Canalside and be part of history.

"When we got to our front row seats, I looked behind me and it was amazing to see so many people," said Burkett, a Hamburg resident and cadet at the U.S. Coast Academy. With him were his relatives and girlfriend, Vivian Mann.

"It was cool as in cold and cool as in fun to be there," said Mann, 17, who will begin basic training with the Navy after graduating from Frontier Central High School next June.

The temperature was 23 degrees when Burkett arrived at 6:38 a.m. and increased three stingy degrees when the commissioning started at 11 a.m. Beneath gray skies, a piercing breeze delivered snowflakes while an estimated 8,500 spectators focused on the bright side of things as history unfolded. But it wasn't until 11:40 a.m. that everyone passed the checkpoints into Canalside.

"I hope no one promised you warm weather, but I can promise you warm hearts," said Lt. Gov. Kathleen C. Hochul, one of the ceremony's first speakers and whose remarks were obviously aimed at folks who had traveled here from Little Rock, Arkansas. "This looks like a very cold Buffalo Bills game."

Before the commissioning started, Mary Wilson, the widow of Buffalo Bills owner Ralph C. Wilson Jr., a World War II Navy veteran, had told retired Navy Secretary Ray Mabus that if her husband were alive, he would have taken Mabus to Sunday's game against the Miami Dolphins.

"Ralph loved the Navy and you would have been standing right beside him in his box at the 50-yard line with the window open," Wilson said to an amused and honored Mabus, who had served on the former USS Little Rock as a junior lieutenant from 1970 to 1972.

Mabus confessed that when he became the Navy's secretary,  a post he held until earlier this year, he always intended to name a new ship after the old Little Rock, a main attraction at the Buffalo & Erie County Naval and Military Park.

Remarks at the hour-long ceremony were generally kept short because of the cold, though Hochul pointed out that having a December commissioning was nothing new for the Navy.

"The Navy's very first ship was commissioned in December 1775 in Philadelphia," she said.

That was a historic event, but so was Saturday's commissioning. For the first time in the Navy's 242 years, a new ship was commissioned alongside the decommissioned ship it was named after and, of course, both ships pay homage to Arkansas' capital, Little Rock. 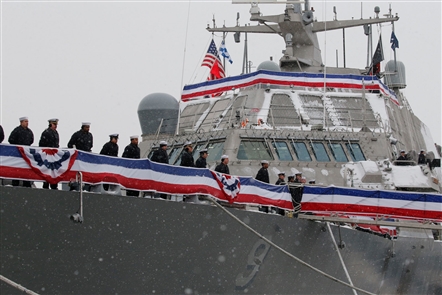 And just a glance away, the old Little Rock seemed to silently watch as the new Little Rock – a $440 million multicapable warship – and its crew stood at the ready to begin their journey defending America around the globe.

Also watching was 80-year-old Robert Hinckley of Holland, who served on the former Little Rock in the 1960s. A tide of emotions filled him as the new Little Rock took up where the old ship left off 41 years ago.

"Really emotional, but good," Hinckley said of how he was feeling, his eyes welling with tears.

For 92-year-old World War II Navy veteran Warren Miller, who saw action in the Pacific Theater, the commissioning was not his first.

"I was at the commissioning of the FDR, an aircraft carrier," the Lackawanna resident said of the carrier  that bore the name of President Franklin D. Roosevelt. "I saw Eleanor Roosevelt. Sailors were shouting to her. I don't know if she heard, but you have to have some humor, right?"

Miller arrived at the commissioning as the guest of Erie County Clerk Mickey Kearns, who had learned that the veteran had wanted to attend, but did not have a way to get there. 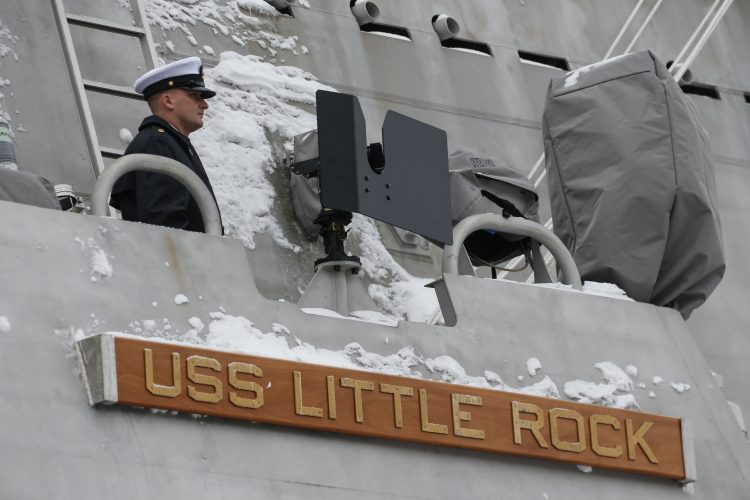 An officer looks out from the bridge wing prior to the start of the Commissioning of the USS Little Rock at Canalside, Saturday, Dec. 16, 2017. (Derek Gee/Buffalo News)

When it was USS Little Rock Cmdr. Todd Peters turn to speak, he too took care of some personal business. He thanked his wife, Marybeth, crediting her for his success in life. Peters then went on to assure crew members of the old Little Rock that the crew of the new ship would "keep up the legacy and fine name" of the former Little Rock.

Lake Erie's history was also recalled during the blessing Navy Chaplain David R. Glassmiere bestowed on crew of the new warship, which also can cruise in shallow waters:

"It was at the Battle of Lake Erie in the War of 1812 that Commodore Oliver Hazard Perry first said, 'Don't give up the ship,' and 'We have met the enemy and they are ours.' Well, today we have a new saying, 'Back with a Vengeance.' "

And while there were historical references, current day politics entered into the ceremony when U.S. Sen. John Boozman, R-Arkansas, took a swipe at Congress. He said federal elected officials have not lived up to their responsibility of adopting federal budgets and that has hurt the Navy.

Approving continuing resolutions to fund the government, he said, hinders repairs of Navy ships and moving forward with the construction of new ones to reach the goal of a 355-ship Navy. Mabus later thanked the senator for publicly drawing attention to that situation.

But the ceremony was mostly a convergence of accomplishment and celebration.

When at last the ship's sponsor, Janee' Bonner, gave the order to the officers and crew to bring the ship "to life," they roared back, "Aye, aye,  ma'am," and broke into a run across the Canalside pier and up the gang planks. Once aboard, they manned the rails, standing at attention and looking out at the thousands who had come to witness the big moment.

The ship's whistle, sounding more like a fog horn, filled the frigid air with a mighty blast, the 57 mm cannon at the bow of the vessel  whirled  in celebratory circles and the radar unit spun atop the superstructure.

In response, the spectators let out cheers and claps muffled by their gloves on this happy, wintry Buffalo day.