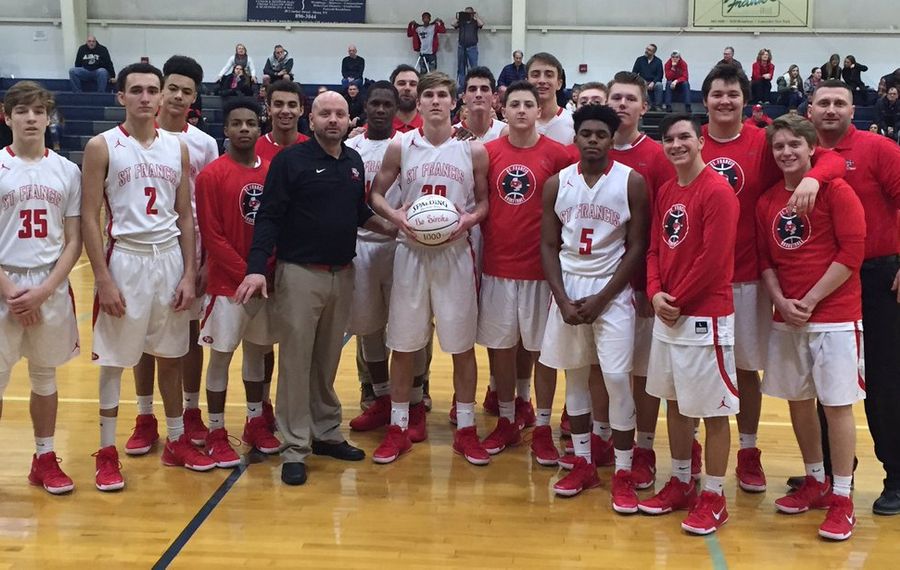 The battle between No. 1 boys basketball teams provided a fitting conclusion to the annual ADPRO Sports Public vs. Private Schools Challenge at St. Mary's of Lancaster on Saturday.

There were lead changes, bodies hitting the floor and calls and non-calls that left coaches, players and fans hollering.

But when it mattered most the more than 800 fans in attendance saw Canisius players hitting the big shot, grabbing the key rebound or making the steal that put the News' No. 1 large school in position to earn a hard fought 67-56 triumph over News top-ranked small school Health Sciences.

Canisius overcame a two-point deficit in a back-and-forth contest by closing the final 5 minutes, 27 seconds with a 23-10 run that enabled the Crusaders to improve to 4-0. Austin James scored seven of his team-high 15 points down the stretch, while Ryan Bradley also scored 15 for Canisius, which enabled the private schools to win the annual 10-game clash against the public schools 7-3.

"We were down for a little bit there but we're a good team and we have a lot of players who come out and help us win games like that," said Bradley, who also grabbed 12 rebounds. "It was very tough. They worked us very hard. They wanted to win it as bad as we did."

While the Monsignor Martin teams got the better of their public schools counterparts, the latter went 2-2 to close the three-day event. That included Williamsville South bolting to a huge lead and handing Bishop Timon-St. Jude its first loss, 55-45, behind Greg Dolan's 31-point performance.

The final game between the reigning Manhattan Cup Class A and Section VI Class B champions proved to be the perfect closing act for the tournament.

The second half saw two ties and four lead changes as the final margin proved to be the biggest lead of the game for either team.

Health Sciences led 31-30 at halftime after a buzzer-beating rainbow three-pointer from just beyond the arc from Kameron Briggs (16 points). That was actually the second buzzer-beating three of the half for the Falcons (4-1), who received one from Davonte Gaines (20 points) from about 26 feet to end the first quarter.

Health Sciences trailed by three entering the fourth quarter but Briggs scored the first five points of the period to give the Falcons a 46-44 lead.

That was the last time they led in this one as James followed a 1-for-2 trip at the line by draining the go-ahead three with 5:27 left. Bradley followed with a layup with Austin hitting two more free throws to make it 52-46. Josiah Haygood's three with 4:22 left pulled Health Sciences within three, but that's as close as Ty Parker's team got in this one.

"It was a tough ball game," said Parker, noting the Falcons should be better down the road for going through Saturday's game. "You have to be able to finish. … We came up short in the last four minutes. .. We just didn't get it done today."

In the penultimate game of the tournament, Williamsville South came out with energy and purpose – elements lacking in last Wednesday's nonleague loss to St. Francis. That proved to be a bad thing for Timon, as the Billies forced a lot of turnovers and mistakes during a 21-7 first quarter. South scored the first 12 points of the contest with Dolan scoring eight and assisting on another.

"Honestly, we came out and we were hungrier," Billies coach Gabe Michael said. "We haven't put two halves together and I still don't think we have but it's easier when you have the lead. … Our defensive energy from everyone in the first half was great."

Timon pulled within five on a couple of occasions as Master Radford scored eight of his 14 points during the second half. Tahron Goudelock added 17 for the Tigers (2-1).

St. Francis (4-1) won its fourth in row, following up its road win at Williamsville South by receiving scoring contributions from 14 different players.

The biggest basket of the night proved to be a first-quarter trey by Sireika, as that enabled him to reach the 1,000 career points milestone. He finished with nine points as the Red Raiders pulled away with a 20-4 second quarter to take a 36-12 lead into halftime.

In the first game of the day, Maple Grove led 32-31 at halftime but pulled away with a 23-14 third quarter. Peter Auer had two of the Red Dragons' four treys in the quarter. He finished with 18 points, while Zach Fischer added 16 for Maple Grove (2-0).