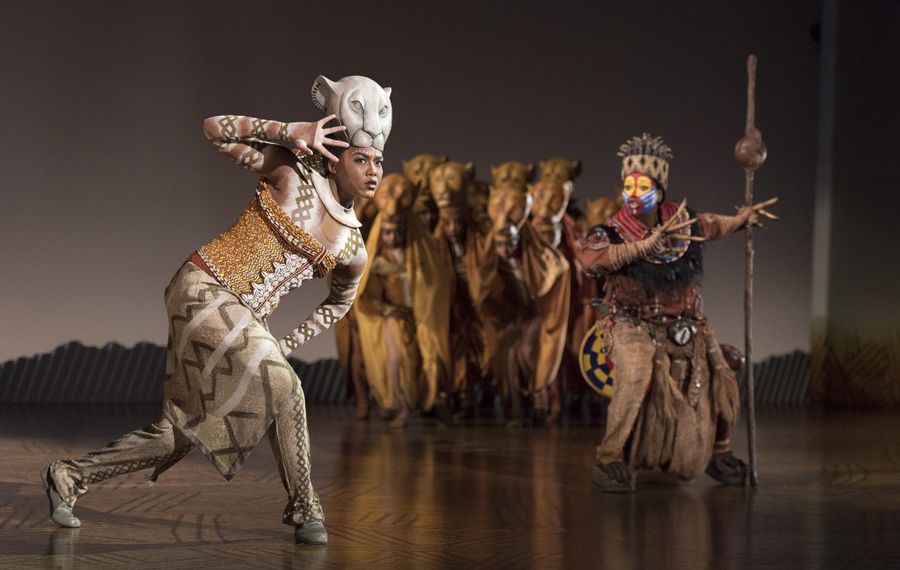 No worries here. At 20 years old, "The Lion King" still roars with all the magic that made it one of the most popular musicals ever. If anything, the production now onstage at Shea's Performing Arts Center is more confident than ever, embracing its legendary status and doing nothing to tarnish it.

It is, in every sense, a "show." Its power remains in its visuals, in its ability to transport an audience to a mythical version of the African veldt where the lion reigns as king. In bringing the movie to the stage, Disney turned its cute and colorful cartoon into a glorious homage to the continent's wild and dangerous beauty. In the words, like its lead character Simba the lion cub, it grew up.

Julie Taymor became famous after designing the extraordinary costumes for the show, and credit goes to the dozens of actors, dancers and singers in the international cast who make the intricate outfits -- lightened up for the traveling version -- work, from those performing as grasslands, trees and even an anthill to the stilt-walking giraffes, shimmying rhinoceros and the life-size elephant.

You don't have to be a child to experience the wonder of it, and even the most jaded children will be impressed.

Equally impressive, though, is the joy the performers appear to take in their roles. According to the program, Ben Lipitz has played Pumbaa the flatulent warthog more than 5,000 times, and clearly he loves it. He wears his exaggerated costume like a second skin, disappearing into it nearly completely. Nick Cordileone as the happily pragmatic meerkat Timon could not have a better foil.

Newer to the show are Mark Campbell as a wonderful ferociously evil Scar, and Gerald Ramsey as the noble king Mufasa, who strikes a strong balance between regal monarch and loving father.

The 11-year-old sitting with me was in awe of the entire production, but she was especially taken with the children appearing as young Simba and Nala. Joziyah Jean-Felix and Ramon Reed alternate as Simba; Danielle W. Jalade and Gloria Manning are Nala. They grow up to be an energetic Gerald Caesar as Simba, and Nia Holloway as Nala, who brings with her one of the finest voices in the company.

Greg Jackson is the very British hornbill Zazu, majordomo for the kings but in truth mainly in charge of the comic relief, at least until Pumbaa blows onto the scene. Zazu also takes in hand most of the updating of the show, with current jokes involving an obnoxious Tweeting relative and even a quick little jab at "The Lion King" movie's top challenger for king of the box office hill, "Frozen."

And then there is Buyi Zama. With her starring role in the "Lion King" television ads, calling out to the Pridelands that a new king has been born, Zama is probably the most familiar player in the show, and she wears that crown lightly. Born in South Africa, she serves as the African heart of the show, click talking and calling out those who would forget where they came from.

The new music for the stage production underscores that and turns it into an event for adults and children alike.

The show runs two and a half hours, long for the littlest children, as noted by the crying baby at the opening night performance. For everyone else, it is a rich experience celebrating creativity, cultures, and the planet's connectedness in that famous circle of life.

New touring production of the blockbuster Broadway musical about a lion cub's coming of age. At Shea's Performing Arts Center, 646 Main St., with evening and some afternoon shows through Jan. 7. Tickets available at the box office (716-847-0850) or through ticketmaster.com.