It had been four years since Jack Eichel celebrated a hat trick. Fans in Buffalo had waited even longer, going six years without hockey's cap-tossing party.

They're still waiting for a three-goal performance in a victory.

Eichel nearly had a signature win Friday. The Sabres center recorded the first hat trick of his NHL career, a milestone that was 175 games in the making. The final two goals came in a 10-second span, erasing a 4-2 deficit and prompting the KeyBank Center crowd to dot the ice with hats and do the Wave.

Carolina and Jaccob Slavin ruined the good times, scoring in overtime for a 5-4 victory.

"It stings, for sure," said Eichel, who completed the hat trick with 10:26 to play. "You get the building into it. The crowd's going. It would have topped off a good night."

It was still a good night. It just could have been a great one for the Sabres and Eichel.

"He's a special player, but when he skates like he was tonight, it makes him even more special," linemate Jason Pominville said. "He was on his toes. He was moving. It makes him extremely tough to defend when he plays that way."

Eichel was nearly unstoppable in burying three goals for the first time since Nov. 15, 2013. He was skating for the U.S. National Team Development Program in the United States Hockey League. He scored three goals and added two assists in an 8-5 victory over Green Bay.

Eichel never had a three-goal night for Boston University in 2014-15 despite winning the Hobey Baker Award as the top collegiate player.

"I felt good," said Eichel, who had a career-high 11 shots. "I felt like I had jump. I was just trying to use my speed, shoot the puck and create for our team.

"You don't really ever go into a game saying that you're going to try and get a hat trick. You always want to just help your team try and win the game and just take what the game gives you, try and do the things that make you successful. I thought I was shooting it pretty well."

Eichel gave credit to defenseman Jake McCabe (one goal, two assists) and left wing Evander Kane (three assists) for helping him achieve the feat. The Sabres had three players with at least three points in the same game for the first time since playing Boston on Jan. 31, 2013.

But Kane was left to lament the finish, which came 15 seconds after he failed to score on an overtime breakaway.

Snowfall and the general lack of interest surrounding the Sabres during their 8-18-7 start led to a half-empty arena. The folks who showed up saw the first hat trick by a Buffalo player at home since April 5, 2011. Thomas Vanek did it during 4-2 victory over Tampa Bay, sealing the deal with 14 seconds left.

"I'm surprised it's been that long," said Pominville, who played in that game but didn't immediately recall it.

The Sabres needed Eichel to score three goals because they imploded early in the third. After taking a 2-1 lead on a goal by McCabe, they allowed three goals in less than four minutes.

"Our play without the puck, it's that urgency that something bad could happen – and it did," he said. 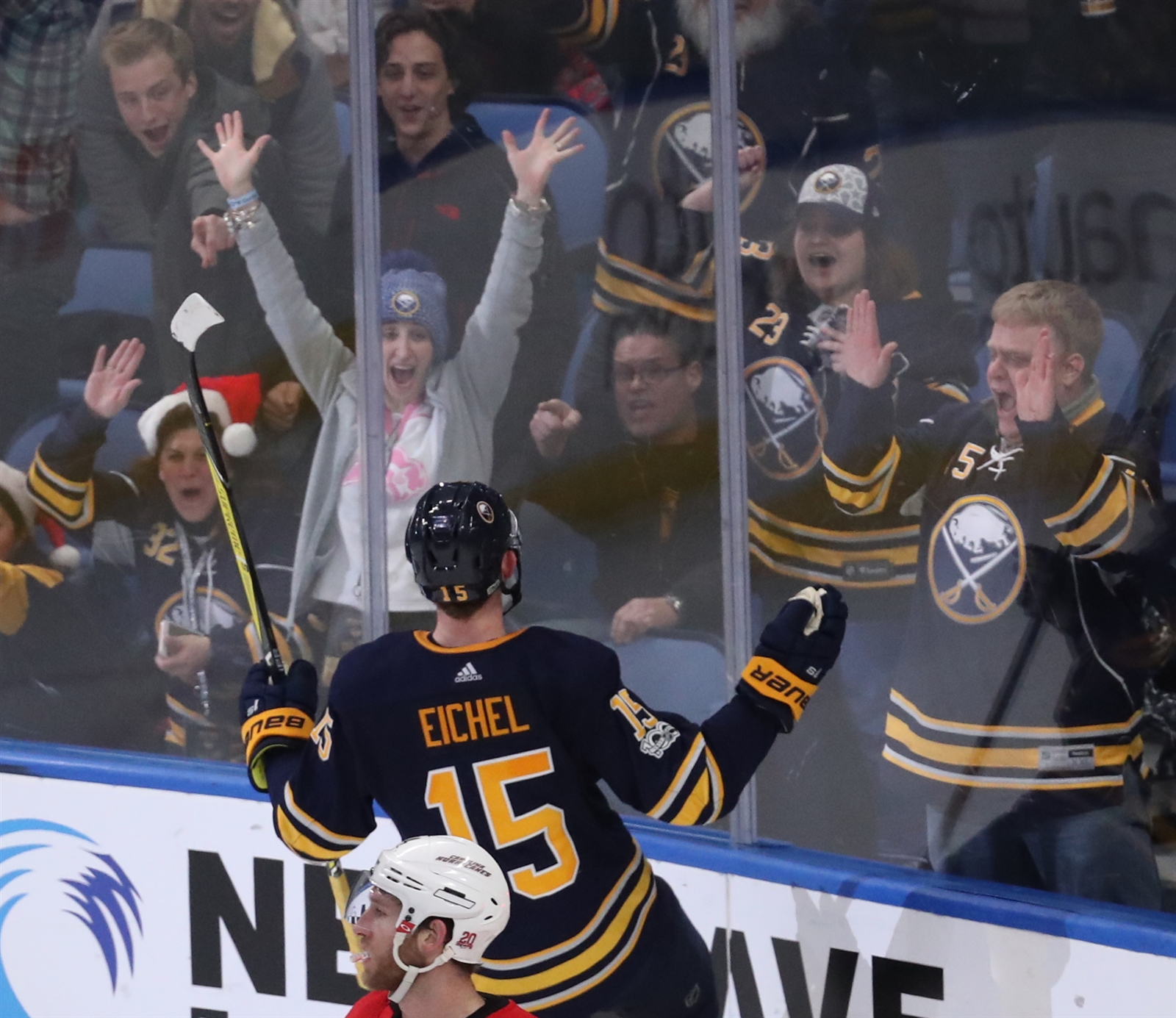 The fans and Jack Eichel had plenty to celebrate, but not a victory. (James P. McCoy/Buffalo News)

"We think we're never out of games, and that's been the case this year," Eichel said. "There's some things that we obviously have to get better at in our D-zone. We did some good things, and obviously as a group we all want to get better.

"It's not good enough to get a point. It seems like that's been the reoccurring theme here as of late."

The Sabres have lost in overtime in three of the last five games, also falling in Chicago and St. Louis. They are 1-6 in OT this year and 0-1 in shootouts.

"It definitely stings," Eichel said. "It's a bit frustrating, but we kind of have to move on from it."